This tutorial explains how to conduct a Kruskal-Wallis Test in Stata.

How to Perform a Kruskal-Wallis Test in Stata

For this example we will use the census dataset, which contains 1980 census data for all fifty states in the U.S. Within the dataset, the states are classified into four different regions:

We will perform a Kruskal-Wallis Test to determine if the median age is equal across these four regions.

Get a quick summary of the dataset by using the following command: 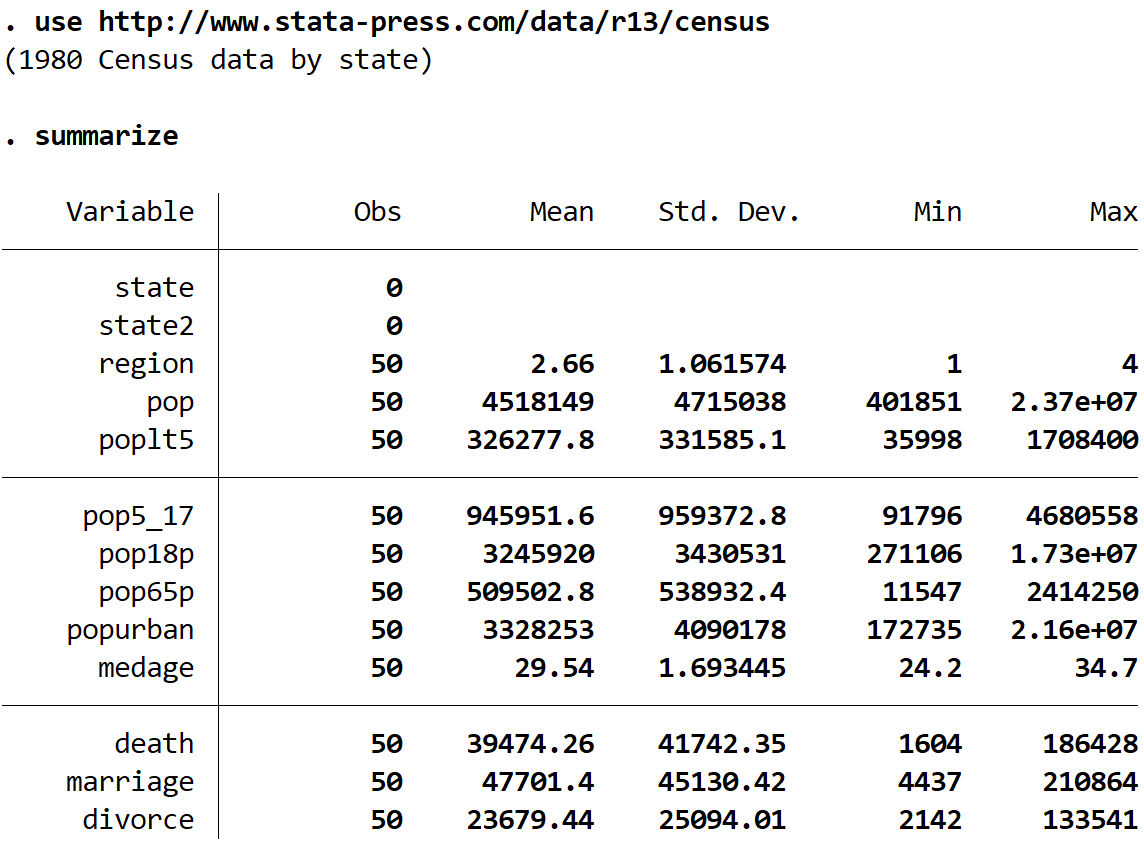 We can see that there are 13 different variables in this dataset, but the only two we will be working with are medage (median age) and region.

Before we perform the Kruskal-Wallis Test, let’s first create some box plots to visualize the distribution of median age for each of the four regions: 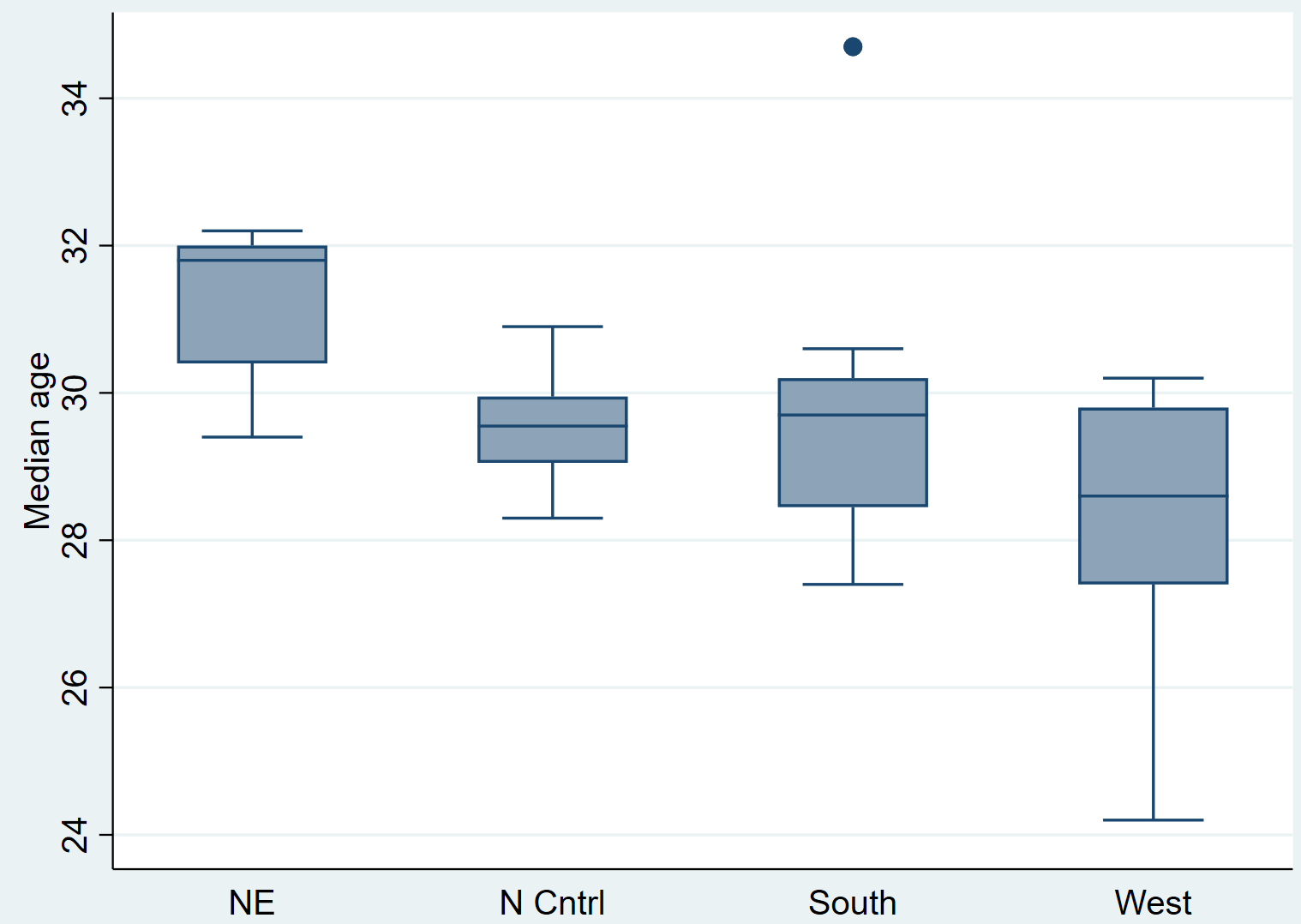 Just from looking at the box plots we can see that the distributions seem to vary between regions. Next, we’ll perform a Kruskal-Wallis Test to see if these differences are statistically significant.

Use the following syntax to perform a Kruskal-Wallis Test:

In our case, we will use the following syntax: 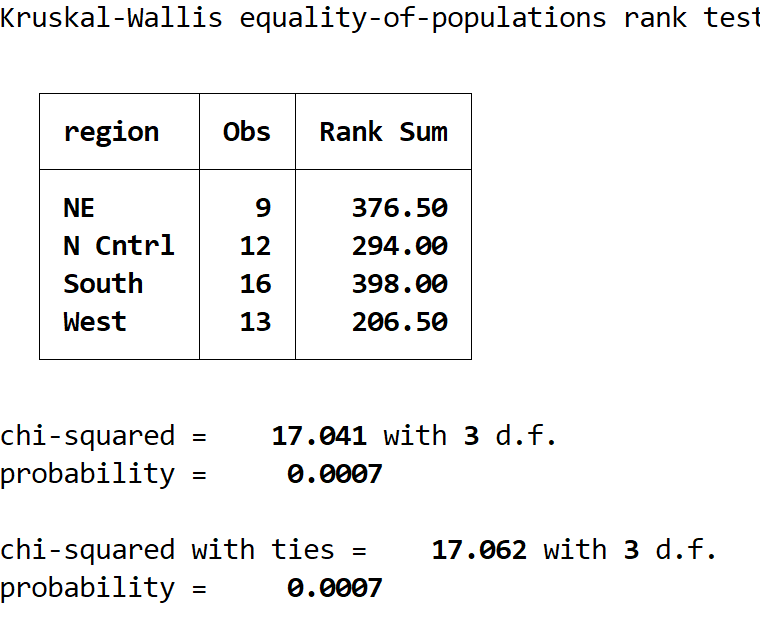 Summary table: This table shows the number of observations per region and the rank sums for each region.

Chi-squared with ties: This is the value of the test statistic, which turns out to be 17.062.

probability: This is the p-value that corresponds to the test statistic, which turns out to be 0.0007. Since this value is less than .05, we can reject the null hypothesis and conclude that the median age is not equal across the four regions.

Lastly, we want to report the results of the Kruskal-Wallis Test. Here is an example of how to do so:

A Kruskal-Wallist Test was performed to determine if the median age of individuals was the same across the following four regions in the United States:

The test revealed that the median age of individuals was not the same (X2 =17.062, p = 0.0007) across the four regions. That is, there was a statistically significant difference in median age between two or more of the regions.