When we want to compare the means of two independent groups, we can choose between using two different tests:

Student’s t-test: this test assumes that both groups of data are sampled from populations that follow a normal distribution and that both populations have the same variance.

Welch’s t-test: this test assumes that both groups of data are sampled from populations that follow a normal distribution, but it does not assume that those two populations have the same variance.

There are two differences in how the Student’s t-test and Welch’s t-test are carried out:

where s12 and s22 are the sample variances.

When Should You Use Welch’s t-test?

In practice, when you are comparing the means of two groups it’s unlikely that the standard deviations for each group will be identical. This makes it a good idea to just always use Welch’s t-test, so that you don’t have to make any assumptions about equal variances.

Next, we will perform Welch’s t-test on the following two samples to determine if their populations means differ significantly at a significance level of 0.05:

We’ll illustrate how to conduct the test in three different ways:

To conduct Welch’s t-test by hand, we first need to find the sample means, sample variances, and sample sizes:

Next, we can plug in these numbers to find the test statistic:

Lastly, we will find the t critical value in the t-distribution table that corresponds to a two-tailed test with alpha = .05 for 18 degrees of freedom: 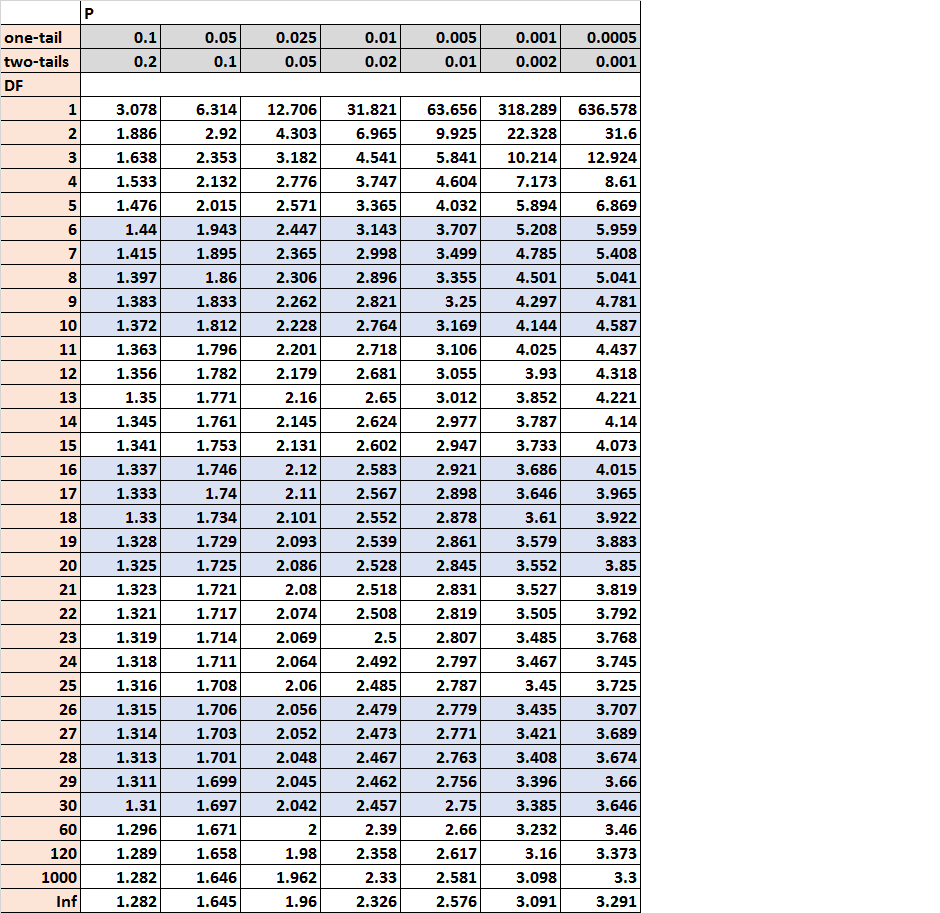 The t critical value is 2.101. Since the absolute value of our test statistic (1.538) is not larger than the t critical value, we fail to reject the null hypothesis of the test. There is not sufficient evidence to say that the means of the two populations are significantly different.

To conduct Welch’s t-test in Excel, we first need to download the free Analysis ToolPak. If you don’t already have this downloaded in Excel, I wrote up a quick tutorial on how to download it.

Once you have the Analysis ToolPak downloaded, you can follow the steps below to conduct Welch’s t-test on our two samples:

1. Input the data. Enter the data values for the two samples in columns A and B along with the headers Sample 1 and Sample 2 in the first cell of each column. 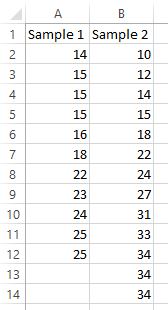 Lastly, fill in the values below and then click OK: 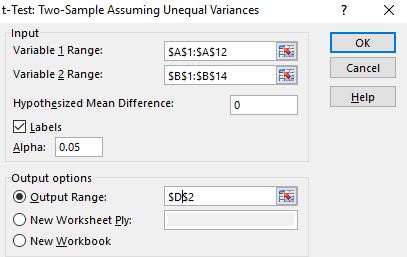 The following output should appear:

The following code illustrates how to perform Welch’s t-test for our two samples using the statistical programming language R:

The results of this test match the results we got by hand and by using Excel: the difference in means for these two populations is not statistically significant at the level of alpha = 0.05.