A two-way ANOVA (“analysis of variance”) is used to determine whether or not there is a statistically significant difference between the means of three or more independent groups that have been split on two factors.

This tutorial explains how to perform a two-way ANOVA in R.

Suppose we want to determine if exercise intensity and gender impact weight loss. In this case, the two factors we’re studying are exercise and gender and the response variable is weight loss, measured in pounds.

We recruit 30 men and 30 women to participate in an experiment in which we randomly assign 10 of each to follow a program of either no exercise, light exercise, or intense exercise for one month.

Before we even fit the two-way ANOVA model, we can gain a better understanding of the data by finding the mean and standard deviation of weight loss for each of the six treatment groups using the dplyr package:

We can also create a boxplot for each of the six treatment groups to visualize the distribution of weight loss for each group: 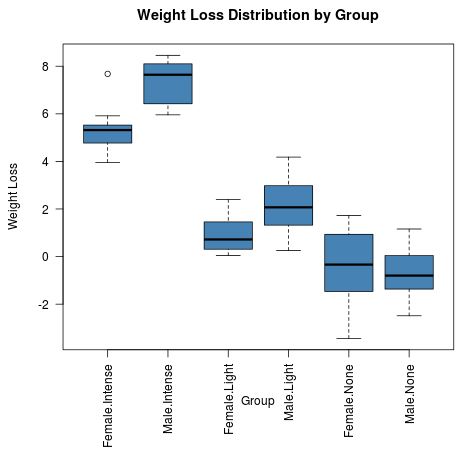 Next, we’ll fit the two-way ANOVA model to our data to see if these visual differences are actually statistically significant.

The general syntax to fit a two-way ANOVA model in R is as follows:

In our example, we can use the following code to fit the two-way ANOVA model, using weight_loss as the response variable and gender and exercise as our two predictor variables.

We can then use the summary() function to view the output of our model:

From the model output we can see that gender, exercise, and the interaction between the two variables are all statistically significant at the .05 significance level.

Before we go any further, we should check to see that the assumptions of our model are met so that the our results from the model are reliable. In particular, a two-way ANOVA assumes:

1. Independence – the observations in each group need to be independent of each other. Since we used a randomized design, this assumption should be met so we don’t need to worry too much about this.

2. Normality – the dependent variable should be approximately normally distributed for each combination of the groups of the two factors. 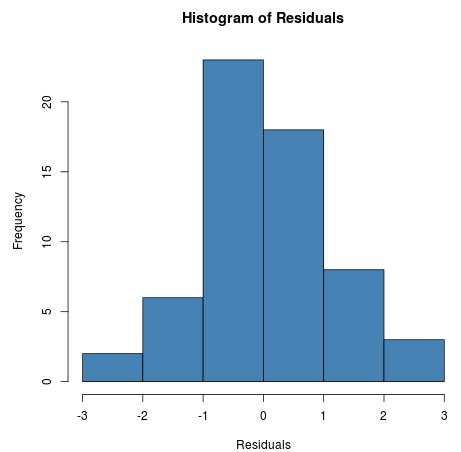 The residuals are roughly normally distributed, so we can assume the normality assumption is met.

One way to check this assumption is to conduct a Levene’s Test for equality of variances using the car package:

Since the p-value of the test is greater than our significance level of 0.05, we can assume that our assumption of equality of variances among groups is met.

Once we have verified that the model assumptions are met, we can then conduct a post hoc test to determine exactly which treatment groups differ from one another.

The p-value indicates whether or not there is a statistically significant difference between each group.

We can also visualize the 95% confidence intervals that result from the Tukey Test by using the plot() function in R: 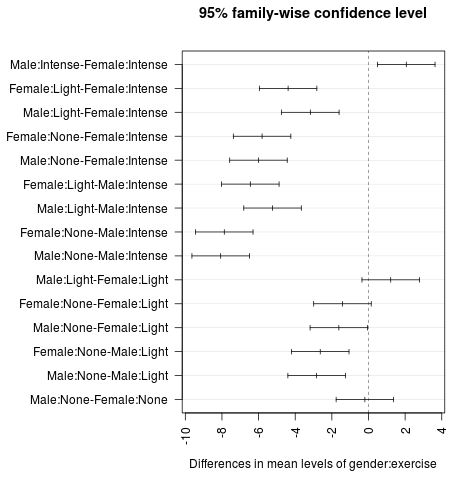 Reporting the Results of the Two-Way ANOVA

Lastly, we can report the results of the two-way ANOVA in such a way that summarizes the findings:

Normality checks and Levene’s test were conducted to verify that the ANOVA assumptions were met.