This tutorial explains how to conduct a two sample t-test in Stata.

Perform the following steps to conduct a two sample t-test to determine if there is a difference in average mpg between these two groups.

First, load the data by typing use http://www.stata-press.com/data/r13/fuel3 in the command box and clicking Enter. 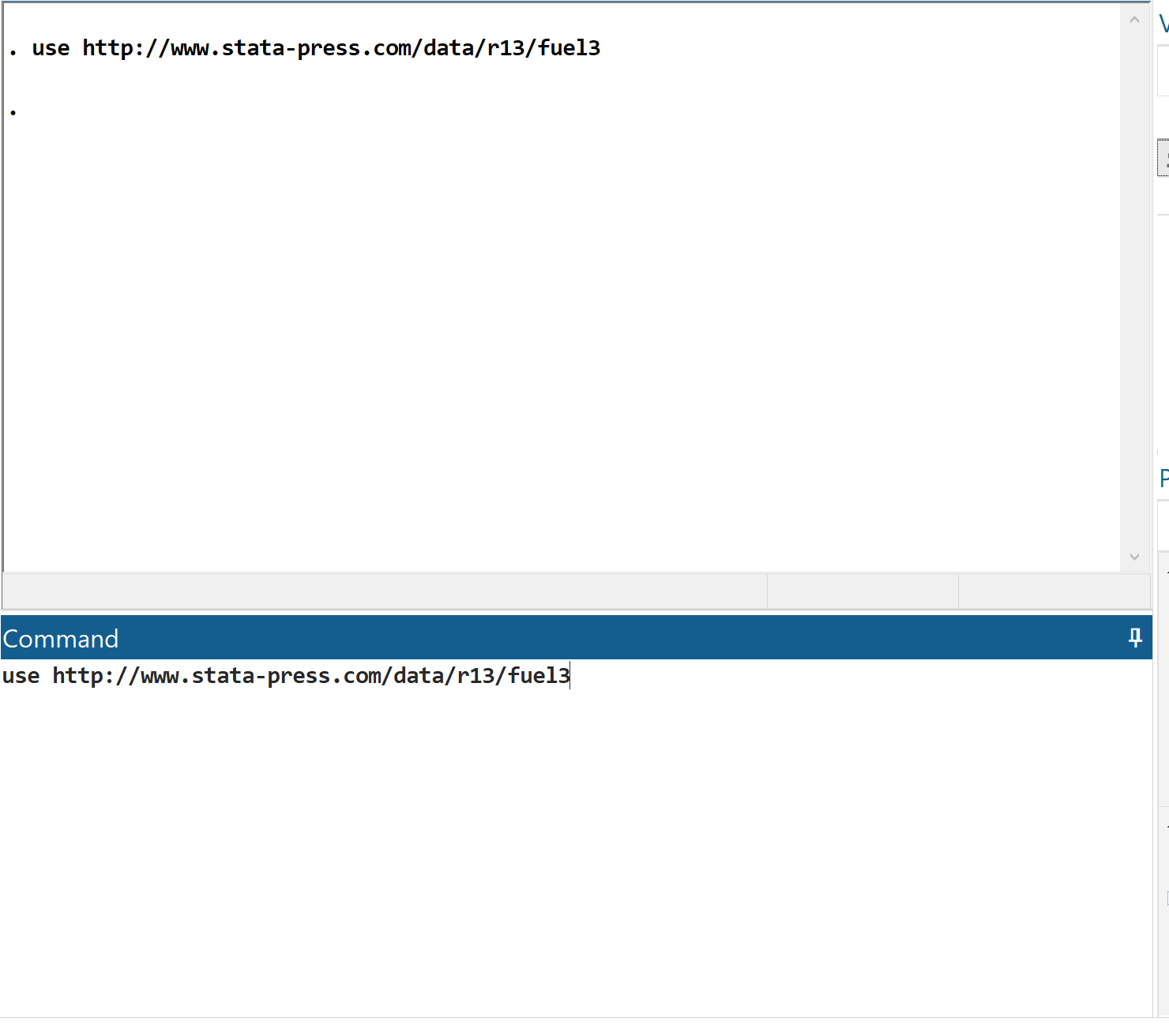 Before we perform a two sample t-test, let’s first view the raw data. Along the top menu bar, go to Data > Data Editor > Data Editor (Browse). The first column, mpg, shows the mpg for a given car. The second column, treated, indicates whether or not the car received the fuel treatment (0 = no, 1 = yes). 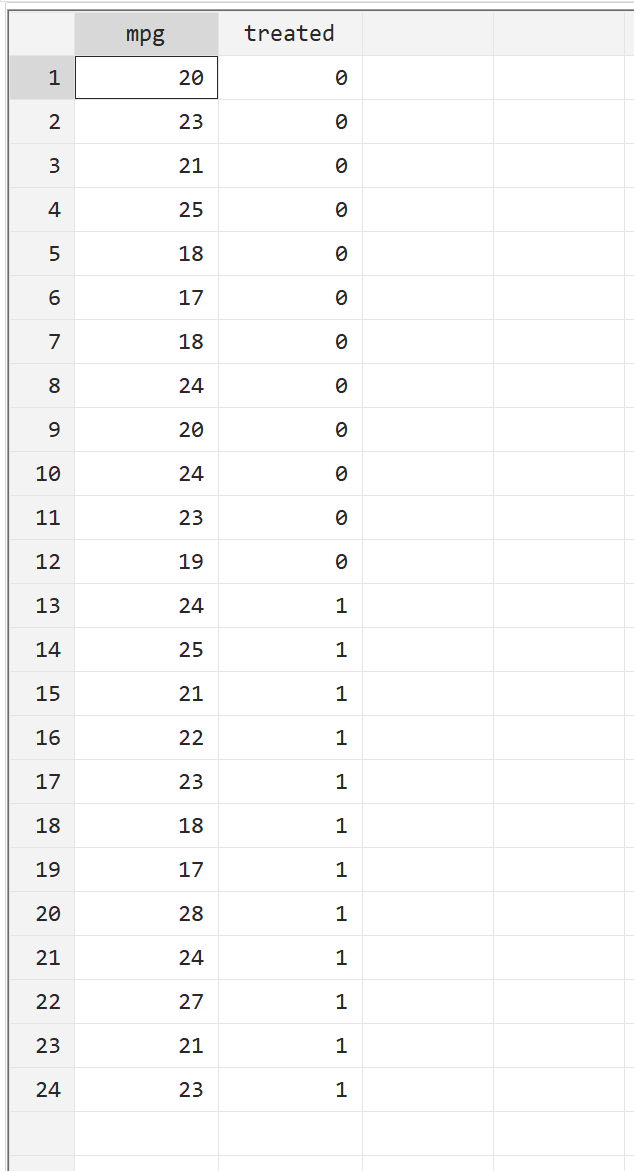 Next, let’s visualize the data. We’ll create boxplots to view the distribution of mpg values for each group.

Then, in the Categories subheading under Grouping variable, choose treated: 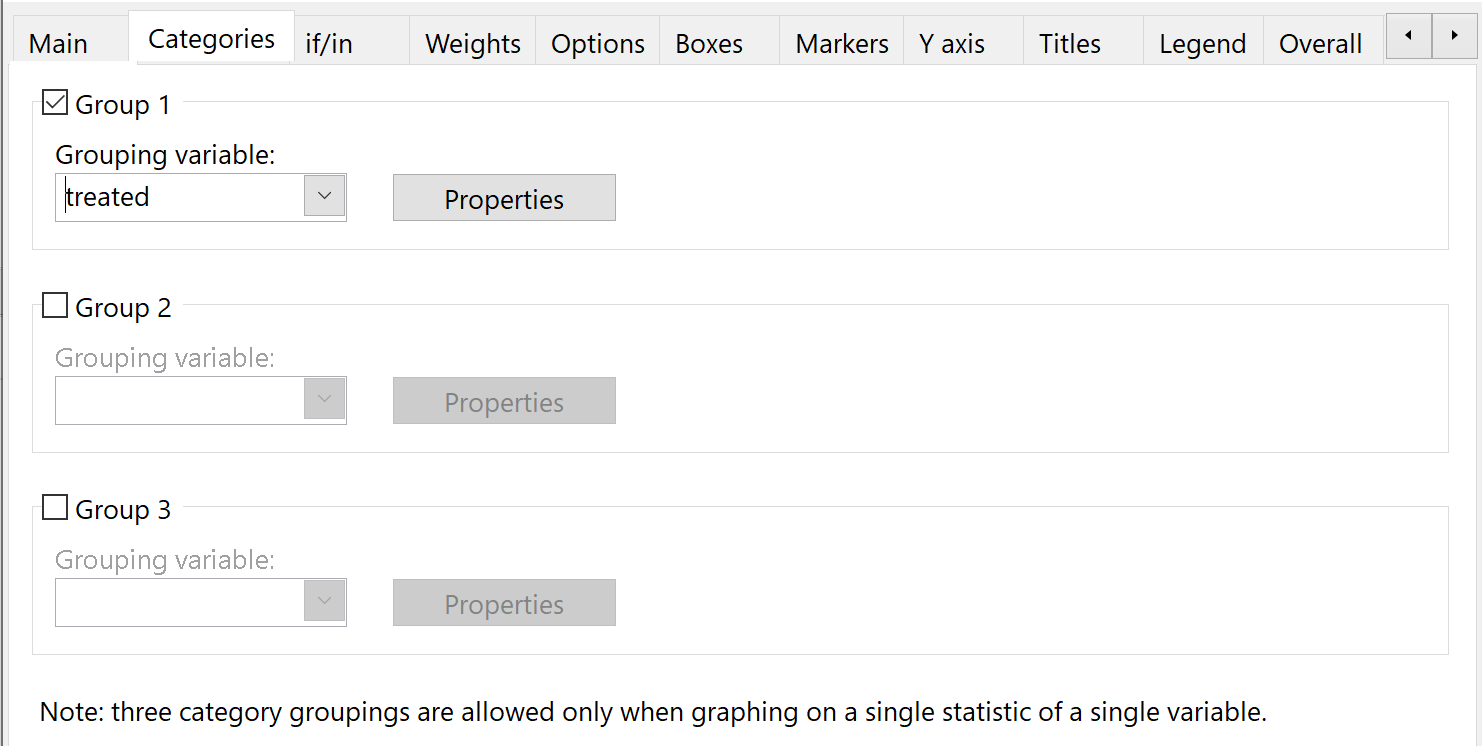 Click OK. A chart with two boxplots will automatically be displayed: 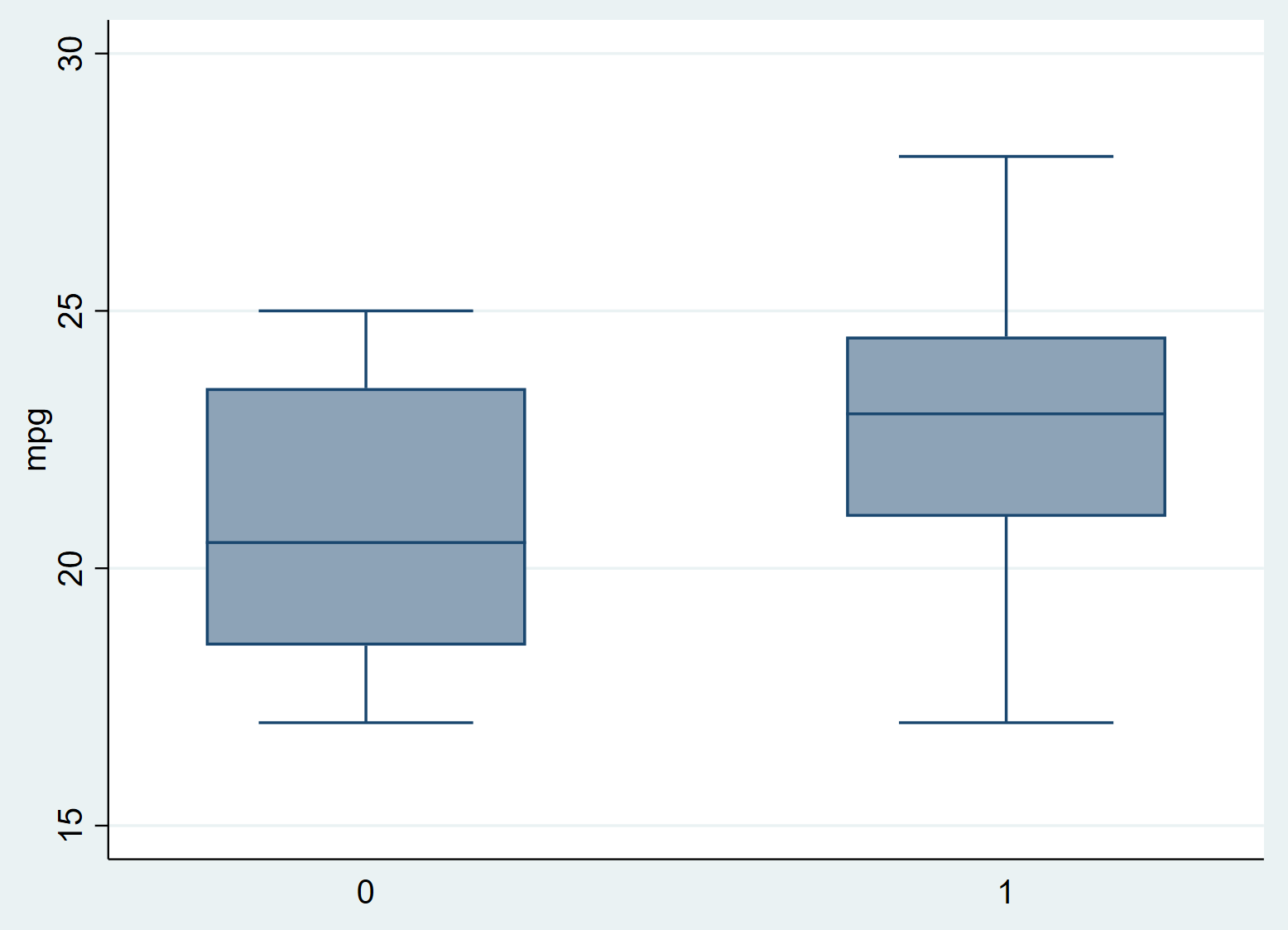 Right away we can see that the mpg appears to be higher for the treated group (1) compared to the non-treated group (0), but we need to conduct a two-sample t-test to see if these differences are statistically significant.

Choose Two-sample using groups. For Variable name, choose mpg. For Group variable name, choose treated. For Confidence level, choose any level you’d like. A value of 95 corresponds to a significance level of 0.05. We will leave this at 95. Lastly, click OK. 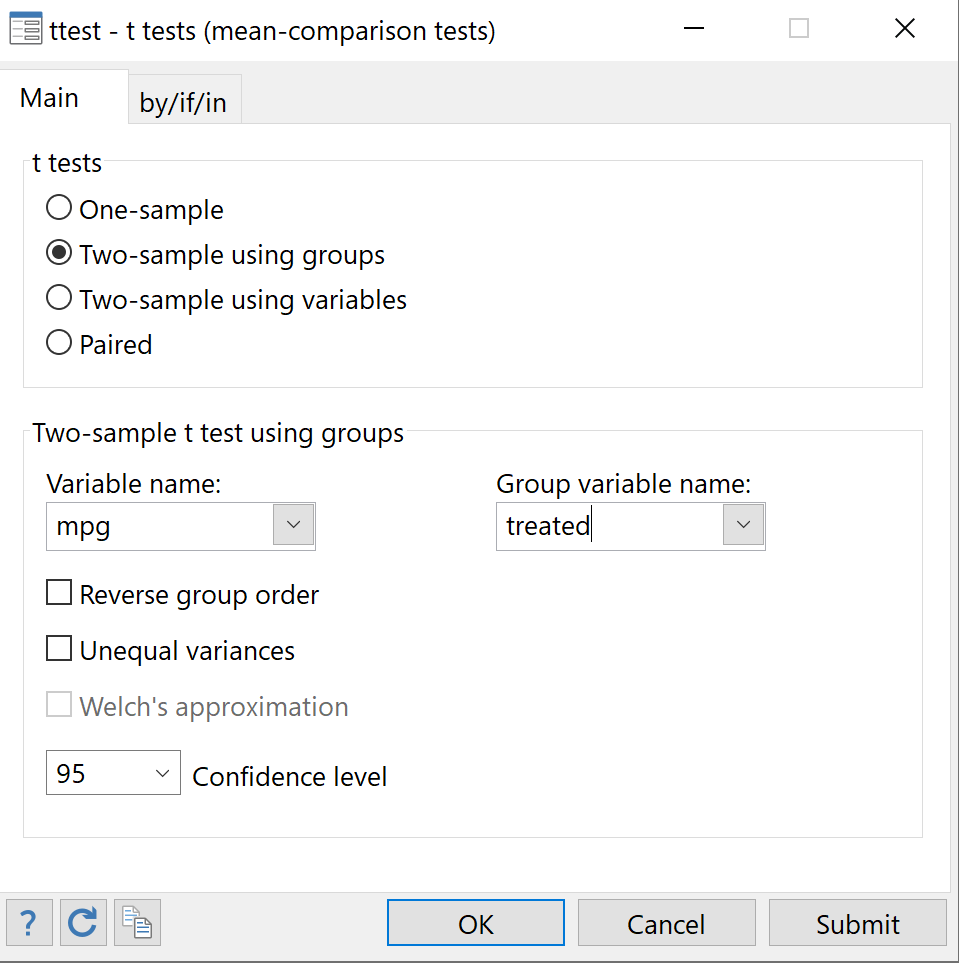 The results of the two sample t-test will be displayed: 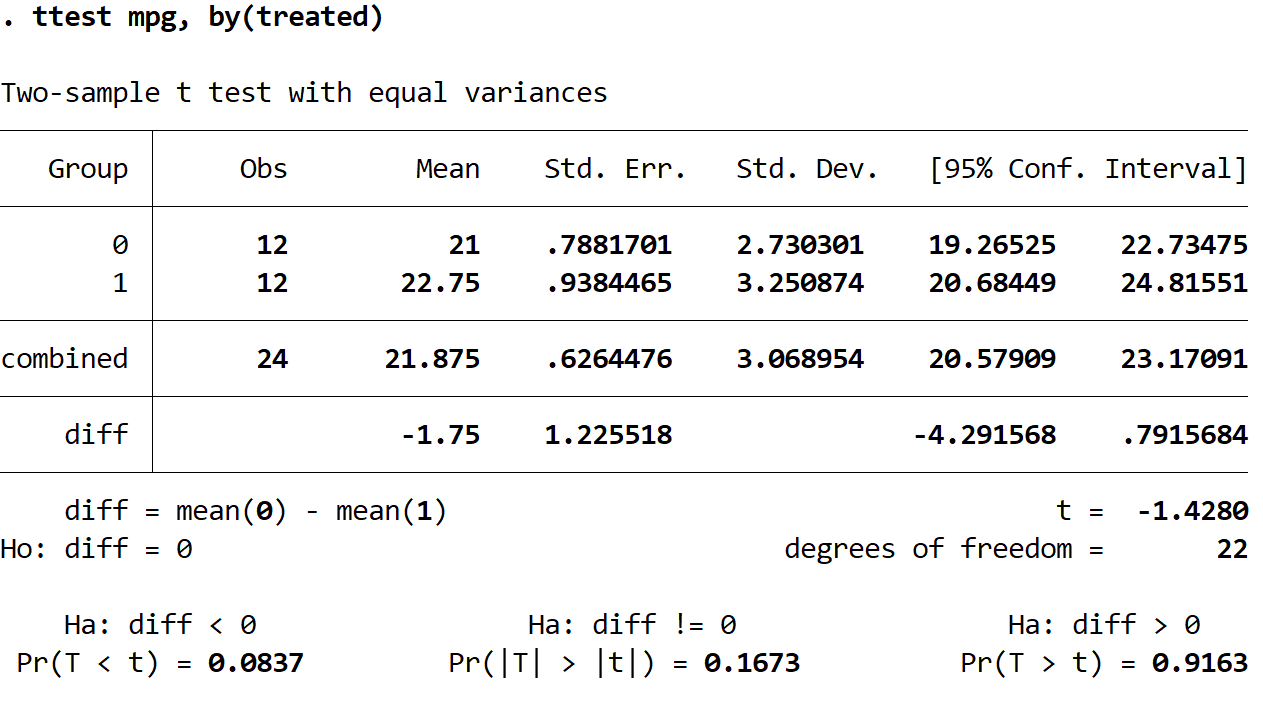 We are given the following information for each group:

95% Conf. Interval: The 95% confidence interval for the true population mean of mpg.

t: The test statistic of the two-sample t-test.

The p-values for three different two sample t-tests are displayed at the bottom of the results. Since we are interested in understanding if the average mpg is simply different between the two groups, we will look at the results of the middle test (in which the alternative hypothesis is Ha: diff !=0) which has a p-value of 0.1673.

Since this value is not smaller than our significance level of 0.05, we fail to reject the null hypothesis. We do not have sufficient evidence to say that the true mean mpg is different between the two groups.

Lastly, we will report the results of our two sample t-test. Here is an example of how to do so:

A two sample t-test was conducted on 24 cars to determine if a new fuel treatment lead to a difference in mean miles per gallon. Each group contained 12 cars.

A 95% confidence interval for the true difference in population means resulted in the interval of (-4.29, .79).