Three of the most commonly used post-hoc tests include:

This tutorial provides an overview of each method along with instructions on which post-hoc test to use depending on the situation.

The Tukey post-hoc test should be used when you would like to make pairwise comparisons between group means when the sample sizes for each group are equal.

If the sample sizes are not equal, you can use a modified version of the test known as the Tukey-Kramer test.

The term “pairwise” means we only want to compare two group means at a time.

For example, suppose we have three groups – A, B, C.

The Tukey post-hoc test would allow us to make the following pairwise comparisons:

Note that for k groups, there are a total of k(k-1)/2 possible pairwise comparisons.

The Scheffe post-hoc test should be used when you would like to make all possible contrasts between group means. This test allows you to compare more than just two means at once, unlike the Tukey post-hoc test.

The Scheffe post-hoc test would allow us to make complex comparisons such as:

While the Scheffe post-hoc test is the most flexible, it is also the most conservative and produces the widest confidence intervals. This means it has the lowest statistical power and the lowest ability to detect true differences between the groups.

Note that the Scheffe post-hoc test can be used whether or not the group sample sizes are equal.

The Bonferroni post-hoc test should be used when you have a set of planned comparisons you would like to make beforehand.

For example, suppose we have three groups – A, B, C – and we know ahead of time that we’re only interested in the following comparisons:

When we have a specific set of planned comparisons we’d like to make ahead of time like this, the Bonferroni post-hoc test produces the most narrow confidence intervals, which means it has the greatest ability to detect true difference between the groups of interest.

Note that the Bonferroni post-hoc test can also be used whether or not the group sample sizes are equal.

Which Method Should You Use?

The following decision tree helps you decide which post-hoc test you should use depending on the situation: 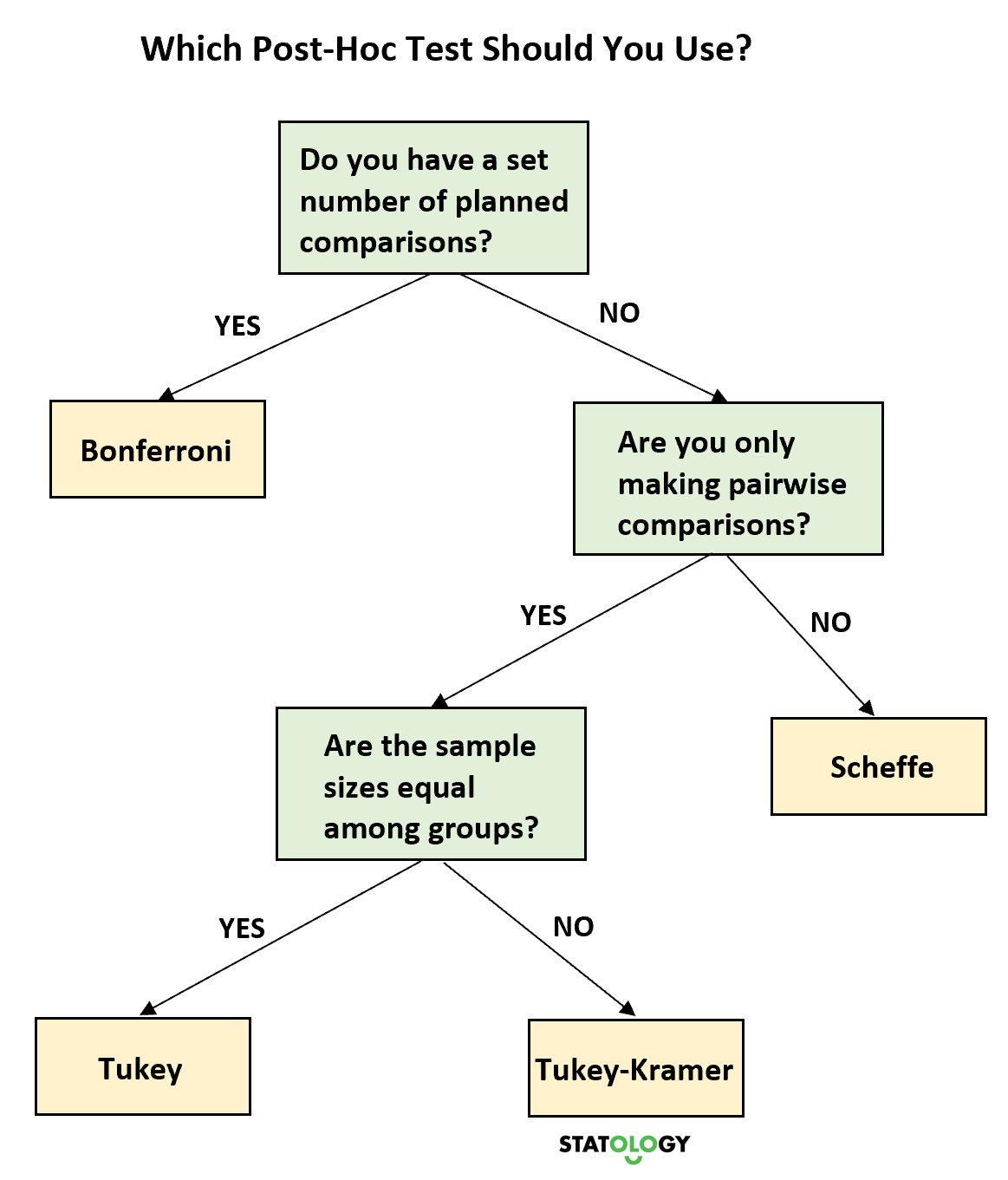 No matter which post-hoc test you choose to use, you should decide on it before conducting the experiment.

This prevents you from choosing a post-hoc test after the experiment that may be more likely to produce significant results, which is considered a dishonest practice in research.

In any case, most statistical software is capable of performing these post-hoc tests so you will rarely have to compute them by hand.