Multiple linear regression is a useful way to quantify the relationship between two or more predictor variables and a response variable.

Typically when we perform multiple linear regression, the resulting regression coefficients are unstandardized, meaning they use the raw data to find the line of best fit.

However, when the predictor variables are measured on drastically different scales it can be useful to perform multiple linear regression using standardized data, which results in standardized coefficients.

To help you wrap your head around this idea, let’s walk through a simple example.

Suppose we have the following dataset that contains information about the age, square footage, and selling price of 12 houses: 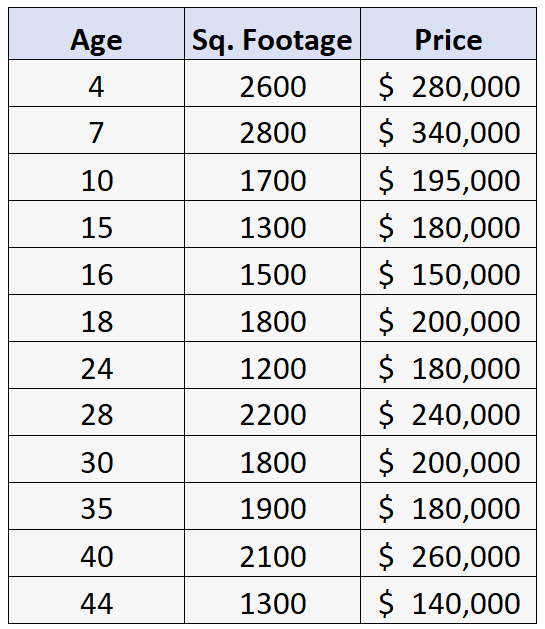 Suppose we then perform multiple linear regression, using age and square footage as the predictor variables and price as the response variable. Here is the regression output:

The regression coefficients in this table are unstandardized, meaning they used the raw data to fit this regression model. Upon first glance, it appears that age has a much larger effect on house price since it’s coefficient in the regression table is -409.833 compared to just 100.866 for the predictor variable square footage.

However, the standard error is much larger for age compared to square footage, which is why the corresponding p-value is actually large for age (p=0.520) and small for square footage (p=0.000).

Suppose we instead standardize the original raw data by converting each original data value to a z-score:

If we then perform multiple linear regression using the standardized data, we’ll get the following regression output:

Immediately we can see that square footage has a much larger effect on house price than age. Also note that the p-values for each predictor variable are the exact same as the previous regression model.

Related: How to Calculate Z-Scores in Excel

Standardized and unstandardized regression coefficients can both be useful depending on the situation. In particular: