When researchers are interested in studying a particular population, they often recruit members of the population to be in a study using some type of sampling method.

Snowball sampling is also sometimes referred to as chain-referral sampling. 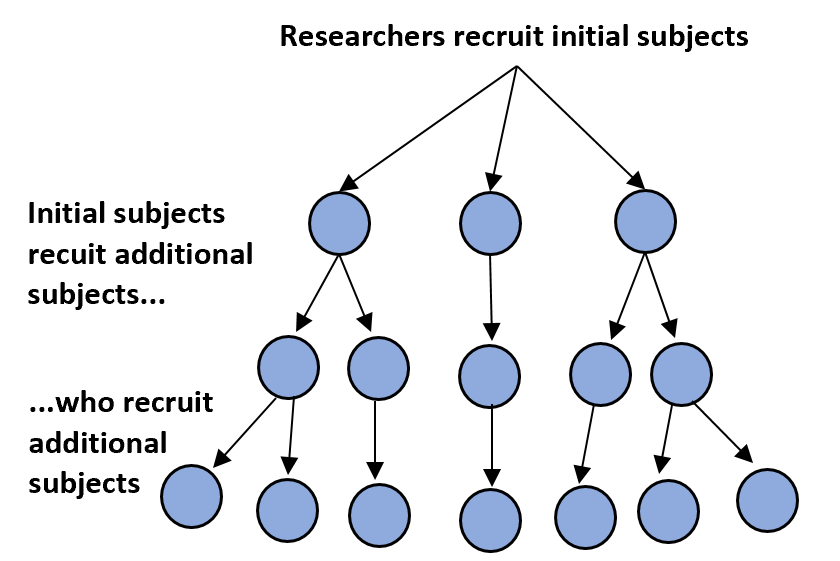 This sampling method is often used when researchers wish to study a population where the subjects are particularly hard to identify or reach. Examples include:

The reason snowball sampling is so effective is because it’s often difficult for researchers to recruit individuals who don’t want to be identified for a particular reason. However, it’s much easier to recruit these individuals if they’re being recruited by people who are in similar circumstances as them and can reassure them that their privacy will be maintained in the study.

A researcher might have a difficult time recruiting someone with a rare disease to be involved in a study, but if that person is being recruited by someone who has the exact same disease, they’re far more likely to oblige.

Snowball sampling is an exampling of a non-probability sampling method, which means that not every member in a particular population has an equal probability of being selected for a study.

There are some advantages to using snowball sampling, including:

There are also several disadvantages to using snowball sampling, including:

The Ethics of Snowball Sampling

Because snowball sampling is often used to recruit individuals who don’t want to be identified or known, the topic of the research is usually sensitive and personal.

For this reason, researchers must be extra careful to protect the private information of the individuals in the study so that their contact details and information isn’t leaked.

The researchers should inform existing subjects and potential future subjects that all of their private information will be kept safe.