Regression models are used to quantify the relationship between one or more predictor variables and a response variable.

Whenever we fit a regression model, we want to understand how well the model “fits” the data. In other words, how well is the model able to use the values of the predictor variables to predict the value of the response variable?

Two metrics that statisticians often use to quantify how well a model fits a dataset are the root mean squared error (RMSE) and the R-squared (R2), which are calculated as follows:

RMSE: A metric that tells us how far apart the predicted values are from the observed values in a dataset, on average. The lower the RMSE, the better a model fits a dataset.

R2: A metric that tells us the proportion of the variance in the response variable of a regression model that can be explained by the predictor variables. This value ranges from 0 to 1. The higher the R2 value, the better a model fits a dataset.

RMSE vs. R2: Which Metric Should You Use?

When assessing how well a model fits a dataset, it’s useful to calculate both the RMSE and the R2 value because each metric tells us something different.

One one hand, RMSE tells us the typical distance between the predicted value made by the regression model and the actual value.

On the other hand, R2 tells us how well the predictor variables can explain the variation in the response variable.

For example, suppose we have the following dataset that shows information about houses in a certain city: 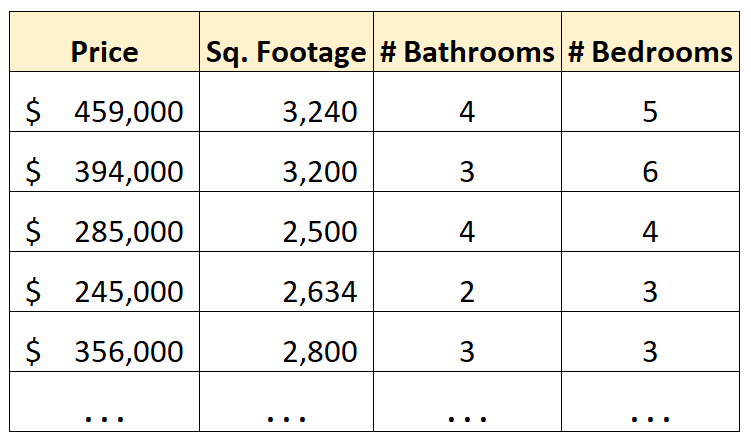 Now suppose we’d like to use square footage, number of bathrooms, and number of bedrooms to predict house price.

We can fit the following regression model:

Now suppose we fit this model and then calculate the following metrics to assess the goodness of fit of the model:

The RMSE value tells us that the average deviation between the predicted house price made by the model and the actual house price is $14,342.

The R2 value tells us that the predictor variables in the model (square footage, # bathrooms, and # bedrooms) are able to explain 85.6% of the variation in the house prices.

When determining if these values are “good” or not, we can compare these metrics to alternative models.

For example, suppose we fit another regression model that uses a different set of predictor variables and calculate the following metrics for that model:

Here are the main points made in this article:

Introduction to Multiple Linear Regression
R vs. R-Squared: What’s the Difference?
What is a Good R-squared Value?