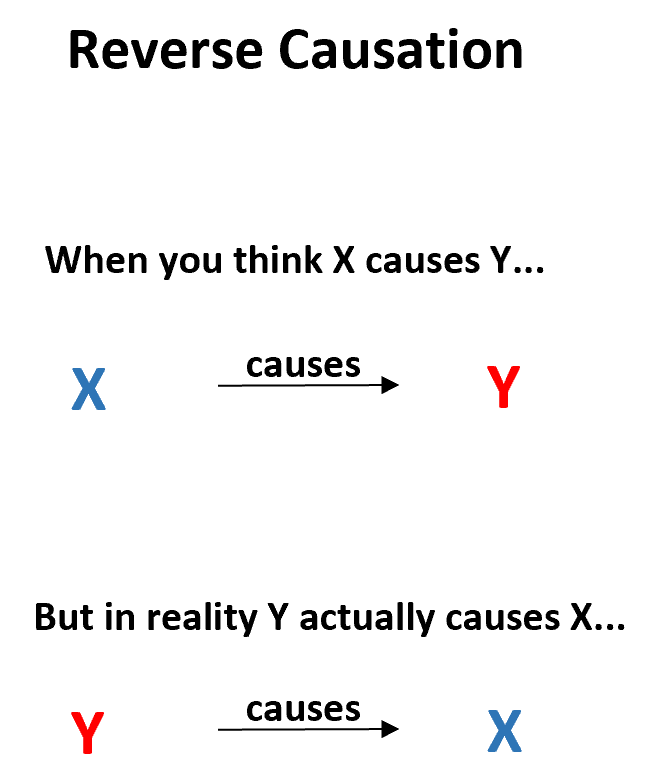 This is a common error that many people make when they look at two phenomenon and wrongly assume that one is the cause while the other is the effect.

One common error of reverse causation involves smoking and depression.

In an observational study, researchers may observe that people who smoke more tend to be more depressed. Thus, they may naively assume that smoking causes depression.

However, it’s possible that researchers are getting this backwards and in reality depression actually causes people to smoke because they view it as a way to alleviate their negative emotions and blow off some stream.

In an observational study, researchers may observe that people who earn higher annual incomes may also report being happier overall in life. Thus, they may simply assume that higher income leads to more happiness.

However, in reality it may be true that people who are naturally happier tend to be better workers and thus earn higher incomes. Thus, researchers may actually get the relationship backwards. Higher income might not cause more happiness. More happiness might be the cause for higher income.

Another example of reverse causation involves drug use and mental wellbeing.

In reality, it may be that people who naturally have lower levels of wellbeing are more likely to use drugs, which means that the true relationship between drug use and mental wellbeing is reversed.

One way to assess the causality between phenomenon is to use the Bradford Hill Criteria, a set of nine criteria proposed by English statistician Sir Austin Bradford Hill in 1965 which are designed to provide evidence of a causal relationship between two variables.

The nine criteria are as follows:

1. Strength:  The larger the association between two variables, the more likely that it is causal.

2. Consistency: Consistent findings observed by different researchers in different locations and with different samples increases the chances that an association is causal.

3. Specificity: Causation is likely if there is a very specific population at a specific site and disease with no other likely explanation.

4. Temporality: The effect has to occur after the cause.

5. Biological gradient: Greater exposure should generally lead to greater incidence of the effect.

6. Plausibility: A plausible mechanism between cause and effect is helpful.

7. Coherence: Coherence between epidemiological and laboratory findings increases the likelihood of an effect.

8. Experiment: Experimental evidence increases the chances that a relationship is causal since other variables can be controlled for during experiments.

9. Analogy: The use of analogies or similarities between the observed association and any other associations can increase the chances of a causal relationship being present.

By using these nine criteria, you can increase the chances that you’re able to correctly identify a cause-and-effect relationship between two variables.