In each of these examples, we want to gain an understanding of a certain population.

Population: The entire group of individuals you are interested in studying.

Sample: A subset of the population.

For example, suppose we want to understand the movie preferences of students in a certain school that has 1,000 total students. Since it would take too long to survey every individual student, we might instead take a random sample of 100 students and ask them about their preferences. 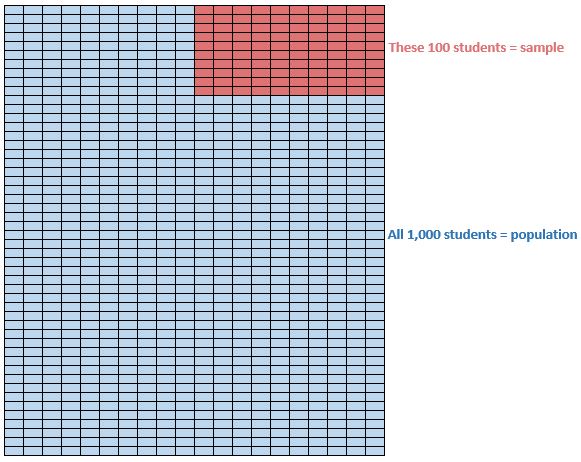 Ideally, we want our sample to be like a “mini version” of our population. So, if the overall student population is composed of 50% girls and 50% boys, our sample would not be representative if it included 90% boys and only 10% girls. 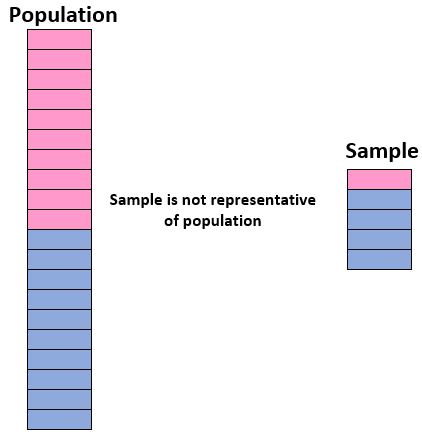 Or, if the overall population is composed of equal parts freshman, sophomores, juniors, and seniors, then our sample would not be representative if it only included freshman. 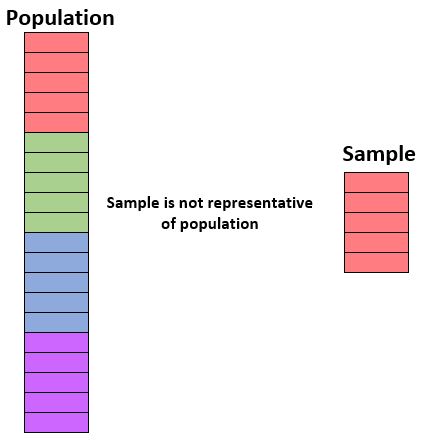 The Importance of Obtaining a Representative Sample

The reason we want a representative sample is so that we can confidently generalize the findings from the sample to the population.

Or, if the total population is a mix of equal parts freshman, sophomores, juniors, and seniors, then a sample with only freshman might lead to biased results as well if younger students (e.g. freshman) tend to prefer drama at much higher rates than older students.

How to Obtain a Representative Sample

To maximize the chances that we obtain a representative sample, we need to focus on two things when obtaining our sample:

1. Use an appropriate sampling method.

There are many ways to obtain a sample from a population, but here are three methods that are likely to obtain a representative sample:

Simple random sample: Randomly select individuals through the use of a random number generator or some means of random selection.

Systematic random sample: Put every member of a population into some order. Choose a random starting point and select every nth member to be in the sample.

Stratified random sample: Split a population into groups. Randomly select some members from each group to be in the sample.

2. Make sure the sample is large enough.

Along with using an appropriate sampling method, it’s important to ensure that the sample is large enough so that we have enough data to generalize to the larger population.

For example, a sample of eight students – a boy and a girl from each grade – might represent a mini version of the larger population, but it’s probably not large enough to capture all of the variability that naturally exists in the responses of the students.

So, how large does your sample need to be?

That depends on the following factors:

There are plenty of sample size calculators online to help you determine how large your sample needs to be based on these factors. This calculator from Survey Monkey is particularly easy to use.

Things to Keep in Mind

Even if you use an appropriate sampling method and ensure that your sample is large enough, keep in mind the following things: