One such method is building a decision tree. However, the downside of using a single decision tree is that it tends to suffer from high variance.

That is, if we split the dataset into two halves and apply the decision tree to both halves, the results could be quite different.

One method that we can use to reduce the variance of a single decision tree is to build a random forest model, which works as follows:

1. Take b bootstrapped samples from the original dataset.

2. Build a decision tree for each bootstrapped sample.

It turns out that random forests tend to produce much more accurate models compared to single decision trees and even bagged models.

This tutorial provides a step-by-step example of how to build a random forest model for a dataset in R.

First, we’ll load the necessary packages for this example. For this bare bones example, we only need one package:

For this example, we’ll use a built-in R dataset called airquality which contains air quality measurements in New York on 153 individual days.

This dataset has 42 rows with missing values, so before we fit a random forest model we’ll fill in the missing values in each column with the column medians:

Related: How to Impute Missing Values in R

From the output we can see that the model that produced the lowest test mean squared error (MSE) used 82 trees.

We can also see that the root mean squared error of that model was 17.64392. We can think of this as the average difference between the predicted value for Ozone and the actual observed value.

We can also use the following code to produce a plot of the test MSE based on the number of trees used: 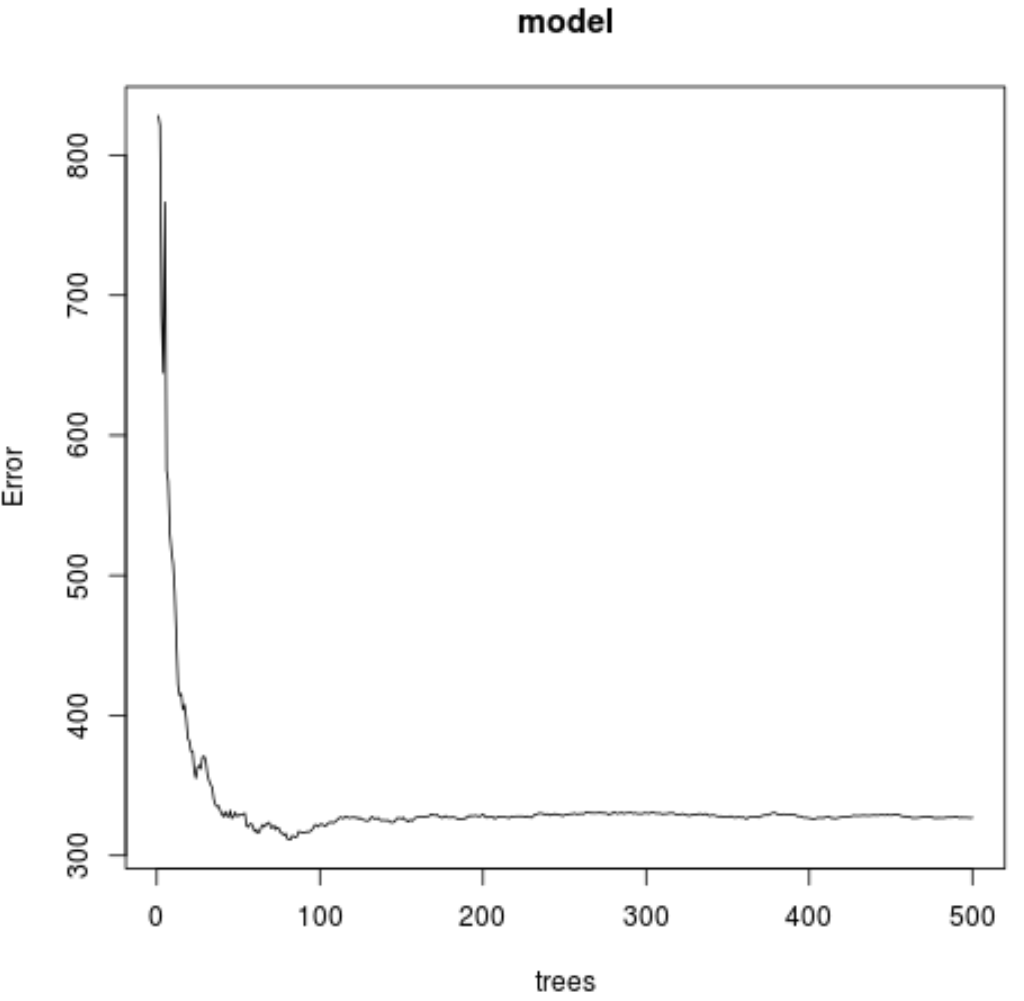 And we can use the varImpPlot() function to create a plot that displays the importance of each predictor variable in the final model: 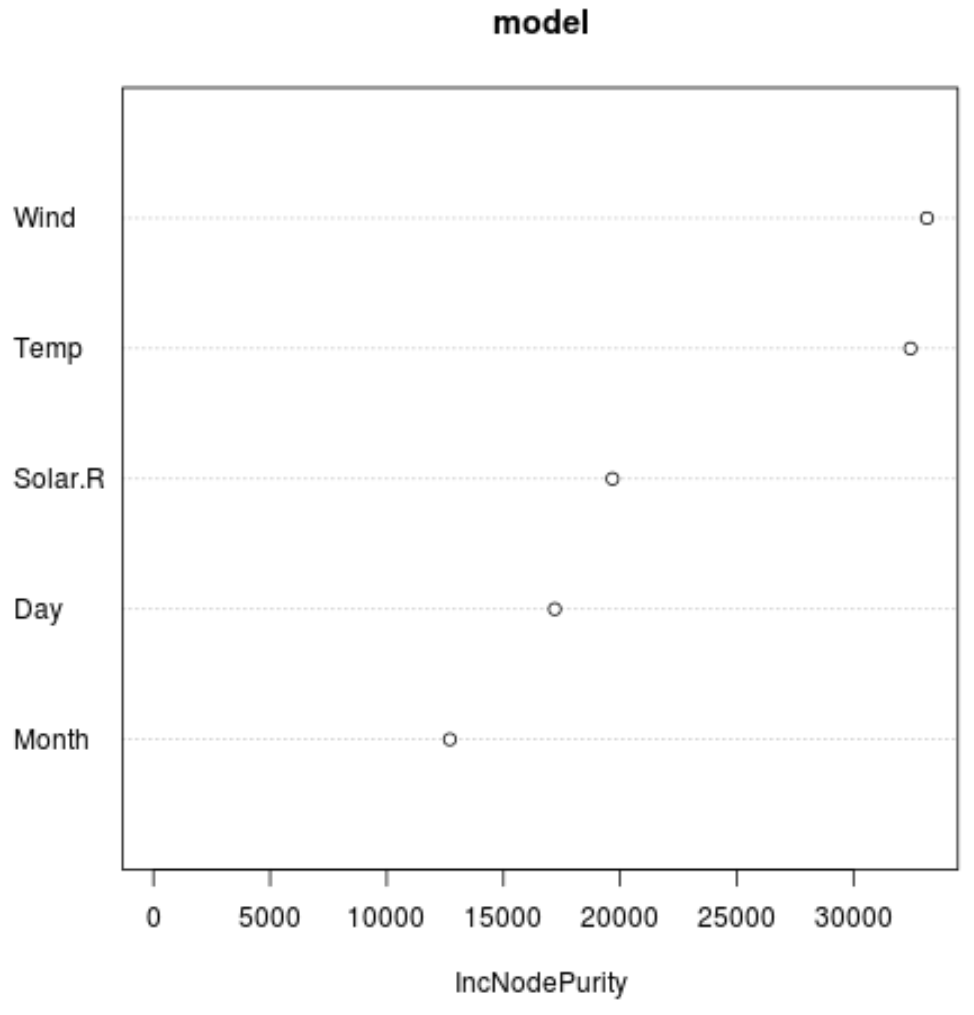 The x-axis displays the average increase in node purity of the regression trees based on splitting on the various predictors displayed on the y-axis.

From the plot we can see that Wind is the most important predictor variable, followed closely by Temp.

By default, the randomForest() function uses 500 trees and (total predictors/3) randomly selected predictors as potential candidates at each split. We can adjust these parameters by using the tuneRF() function.

The following code shows how to find the optimal model by using the following specifications:

This function produces the following plot, which displays the number of predictors used at each split when building the trees on the x-axis and the out-of-bag estimated error on the y-axis: 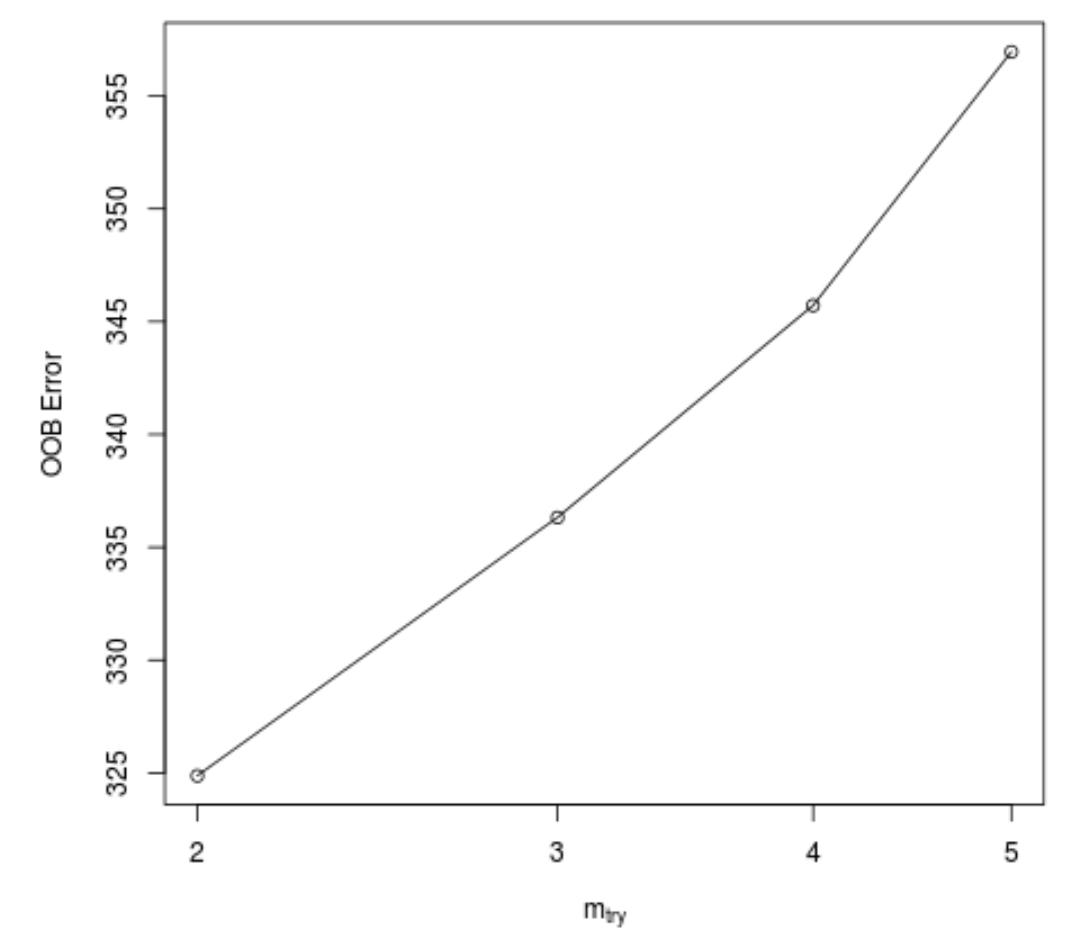 We can see that the lowest OOB error is achieved by using 2 randomly chosen predictors at each split when building the trees.

Lastly, we can use the fitted random forest model to make predictions on new observations.

Based on the values of the predictor variables, the fitted random forest model predicts that the Ozone value will be 27.19442 on this particular day.

The complete R code used in this example can be found here.