Regression is a statistical method that can be used to determine the relationship between one or more predictor variables and a response variable.

Example 1: Poisson regression can be used to examine the number of students who graduate from a specific college program based on their GPA upon entering the program and their gender. In this case, “number of students who graduate” is the response variable, “GPA upon entering the program” is a continuous predictor variable, and “gender” is a categorical predictor variable.

Example 2: Poisson regression can be used to examine the number of traffic accidents at a particular intersection based on weather conditions (“sunny”, “cloudy”, “rainy”) and whether or not a special event is taking place in the city (“yes” or “no”). In this case, “number of traffic accidents” is the response variable, while “weather conditions” and “special event” are both categorical predictor variables.

Example 4: Poisson regression can be used to examine the number of people who finish a triathlon based on weather conditions (“sunny”, “cloudy”, “rainy”) and difficulty of the course (“easy”, “moderate”, “difficult”). In this case, “number of people who finish” is the response variable, while “weather conditions” and “difficulty of the course” are both categorical predictor variables.

Conducting a Poisson regression will allow you to see which predictor variables (if any) have a statistically significant effect on the response variable.

Assumption 2: Observations are independent. Each observation in the dataset should be independent of one another. This means that one observation should not be able to provide any information about a different observation.

Assumption 3: The distribution of counts follows a Poisson distribution. As a result, the observed and expected counts should be similar. One simple way to test for this is to plot the expected and observed counts and see if they are similar.

Now we will walk through an example of how to conduct Poisson regression in R.

Suppose we want to know how many scholarship offers a high school baseball player in a given county receives based on their school division (“A”, “B”, or “C”) and their college entrance exam score (measured from 0 to 100).

The following code creates the dataset we will work with, which includes data on 100 baseball players:

Before we actually fit the Poisson regression model to this dataset, we can get a better understanding of the data by viewing the first few lines of the dataset and by using the dplyr library to run some summary statistics:

From the output above we can observe the following:

We can also create a histogram to visualize the number of offers received by players based on division: 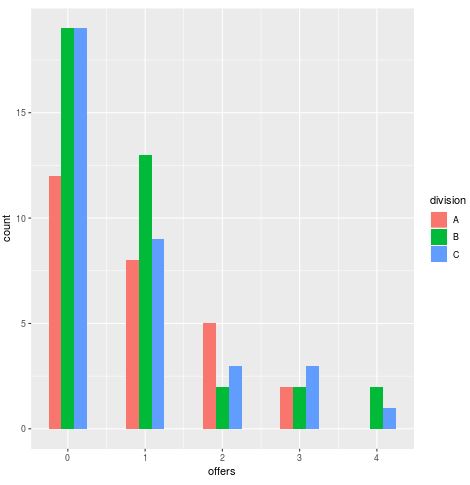 We can see that most players received either zero or one offer. This is typical for datasets that follow Poisson distributions: a decent chunk of response values are zero.

Next, we can fit the model using the glm() function and specifying that we’d like to use family = “poisson” for the model:

From the output we can observe the following:

Information on the deviance of the model is also provided. We are most interested in the residual deviance, which has a value of 79.247 on 96 degrees of freedom. Using these numbers, we can conduct a Chi-Square goodness of fit test to see if the model fits the data. The following code illustrates how to conduct this test:

The p-value for this test is 0.89, which is much larger than the significance level of 0.05. We can conclude that the data fits the model reasonably well.

We can also create a plot that shows the predicted number of scholarship offers received based on division and entrance exam score using the following code: 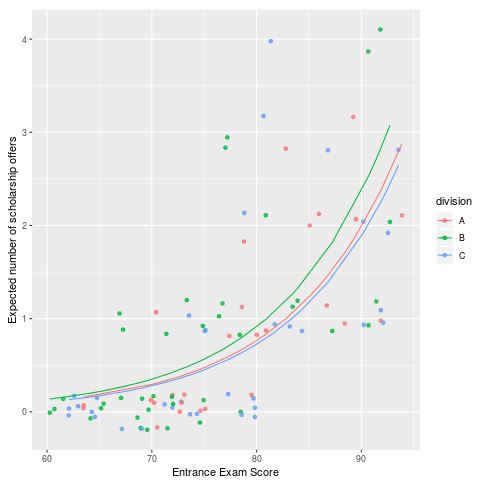 The plot shows the highest number of expected scholarship offers for players who score high on the entrance exam score. In addition, we can see that players from division B (the green line) are expected to get more offers in general than players from either division A or division C.

Lastly, we can report the results of the regression in such a way that summarizes our findings: