In statistics, parallel forms reliability measures the correlation between two equivalent forms of a test.

The process for calculating parallel forms reliability is as follows:

For example, randomly split a 100-question test into Test A that contains 50 questions and Test B that also has 50 questions. 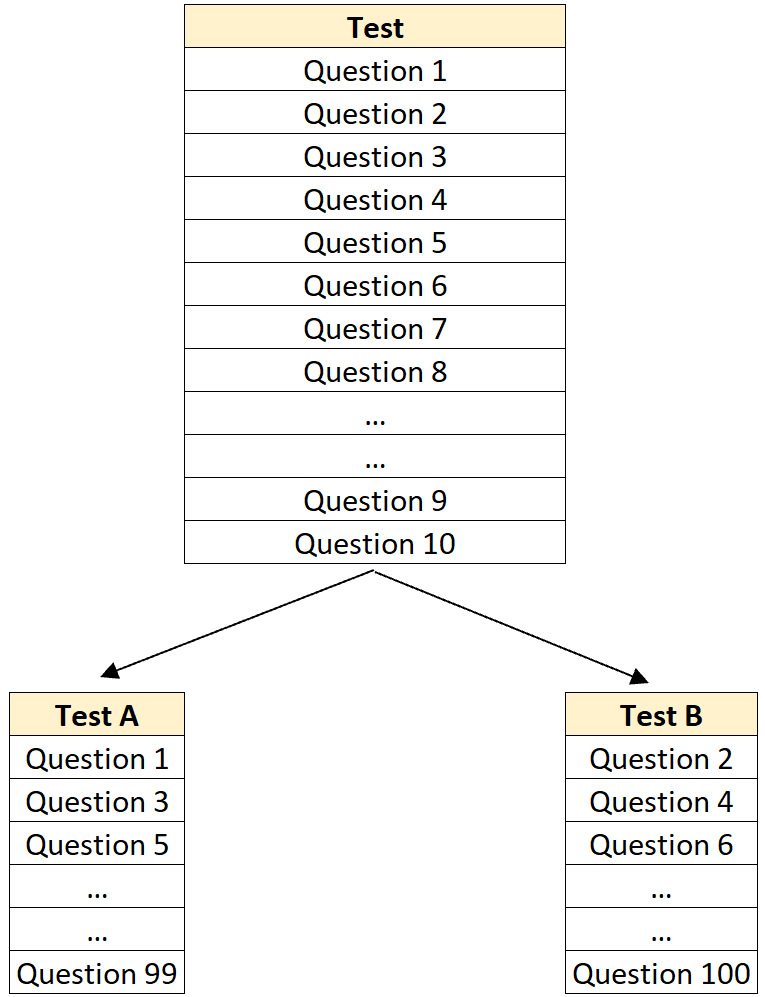 Step 3: Calculate the correlation between test scores for the two tests.

When to Use Parallel Forms Reliability

Parallel forms reliability is often used in academic settings when a professor doesn’t want students to be able to have access to test questions in advance.

For example, if the professor gives out test A to all students at the beginning of the semester and then gives out the same test A at the end of the semester, the students may simply memorize the questions and answers from the first test.

However, by giving out a different test B at the end of the semester (that is hopefully equal in difficulty), the professor is able to assess the knowledge of the students while guaranteeing that the students have not seen the questions before.

There are two potential drawbacks of parallel forms reliability:

1. It requires a lot of questions.

Parallel forms reliability works best for tests that have a large number of questions (e.g. 100 questions) because the number we calculate for the correlation will be more reliable.

2. There is no guarantee that the two halves are actually parallel.

When we randomly split a test into two halves, there is no guarantee that the two halves will actually be parallel or “equal” in difficulty. This means that the scores could differ between the two tests simply because one half turns out to be more difficult than the other.

Parallel forms reliability is similar to split-half reliability, but there’s a slight difference:

This involves splitting a test into two halves and administering each half to the same group of students. The order that the students take the test in isn’t important.

The point of this method is to measure internal consistency. Ideally we would like the correlation between the halves to be high because this indicates that all parts of the test are contributing equally to what is being measured.

This involves splitting a test into two halves – call them “A” and “B” – and administering each half to the same group of students.

However, it’s important that all students take test “A” first and then take test “B” so that knowing the answers to test “A” doesn’t provide any benefit to students who later take test “B.”