A paired samples t-test is a statistical test that compares the means of two samples when each observation in one sample can be paired with an observation in the other sample.

For example, suppose we want to know whether a certain study program significantly impacts student performance on a particular exam. To test this, we have 20 students in a class take a pre-test. Then, we have each of the students participate in the study program each day for two weeks. Then, the students retake a test of similar difficulty.

To compare the difference between the mean scores on the first and second test, we use a paired t-test because for each student their first test score can be paired with their second test score.

How to Conduct a Paired t-test

To conduct a paired t-test, we can use the following approach:

where  μd is the mean difference.

Step 3: Reject or fail to reject the null hypothesis, based on the significance level.

How to Conduct a Paired t-test in R

To conduct a paired t-test in R, we can use the built-in t.test() function with the following syntax:

The following example illustrates how to conduct a paired t-test to find out if there is a significant difference in the mean scores between a pre-test and a post-test for 20 students.

Next, we’ll look at summary statistics of the two groups using the group_by() and summarise() functions from the dplyr library:

We can also create boxplots using the boxplot() function in R to view the distribution of scores for the pre and post groups: 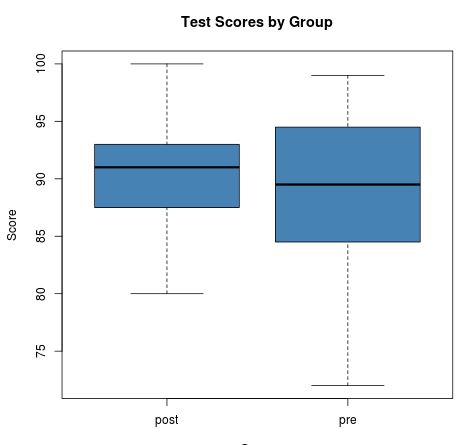 To find out if the difference between the means for these two groups is statistically significant, we can proceed to conduct a paired t-test.

Before we conduct the paired t-test, we should check that the distribution of differences is normally (or approximately normally) distributed. To do so, we can create a new vector defined as the difference between the pre and post scores, and perform a shapiro-wilk test for normality on this vector of values:

The p-value of the test is 0.1135, which is greater than alpha = 0.05. Thus, we fail to reject the null hypothesis that our data is normally distributed. This means we can now proceed to conduct the paired t-test.

We can use the following code to conduct a paired t-test:

From the output, we can see that:

Thus, since our p-value is less than our significance level of 0.05 we will fail to reject the null hypothesis that the two groups have statistically significant means.

In other words, we do not have sufficient evidence to say that the mean scores between the pre and post groups are statistically significantly different. This means the study program had no significant effect on test scores.

Since the value zero is contained in this confidence interval, this means that zero could in fact be the true difference between the mean scores, which is why we failed to reject the null hypothesis in this case.