In these types of studies, order effects refer to differences in participant responses as a result of the order in which treatments are presented to them.

For example, suppose researchers measure the percentage of free throws made by basketball players in which each player is instructed to shoot 10 free throws using a certain technique – A, B, or C – when shooting.

Here are the various orders in which players could shoot the free throws:

Regardless of whether or not one technique is better, it’s likely that players will become slightly tired or fatigued by time they use the last technique which means they’ll likely perform worst using that technique.

This is an example of an order effect. The order in which players try each technique has an effect on the percentage of free throws they make.

There are several different types of order effects that can occur in experiments, including:

Fatigue Effects: Participants may perform worse near the end of an experiment simply because they’ve become fatigued from performing some task over and over again.

Boredom Effects: Participants may perform worse near the end of an experiment simply because they get bored if a task is overly repetitive or long.

Carryover Effects: Participants may respond to treatments differently depending on the treatment they were exposed to previously. For example, in experiments in which participants have to estimate the weight of objects they are likely to be influenced by how heavy the previous object was that they esimated.

In any experiment involving repeated measurements of the same individuals, one or more of these order effects may appear which could skew the results.

How to Prevent Order Effects

Depending on the type of order effect expected to occur, researchers can take the following steps to prevent them:

Practice Effects: To prevent practice effects, researchers could give each participant some time to warm up with the task to prevent them from getting better at the task during the experiment.

Carryover Effects: To prevent carryover effects, researchers could add more time in between tasks so participants aren’t influenced by their previous trial. 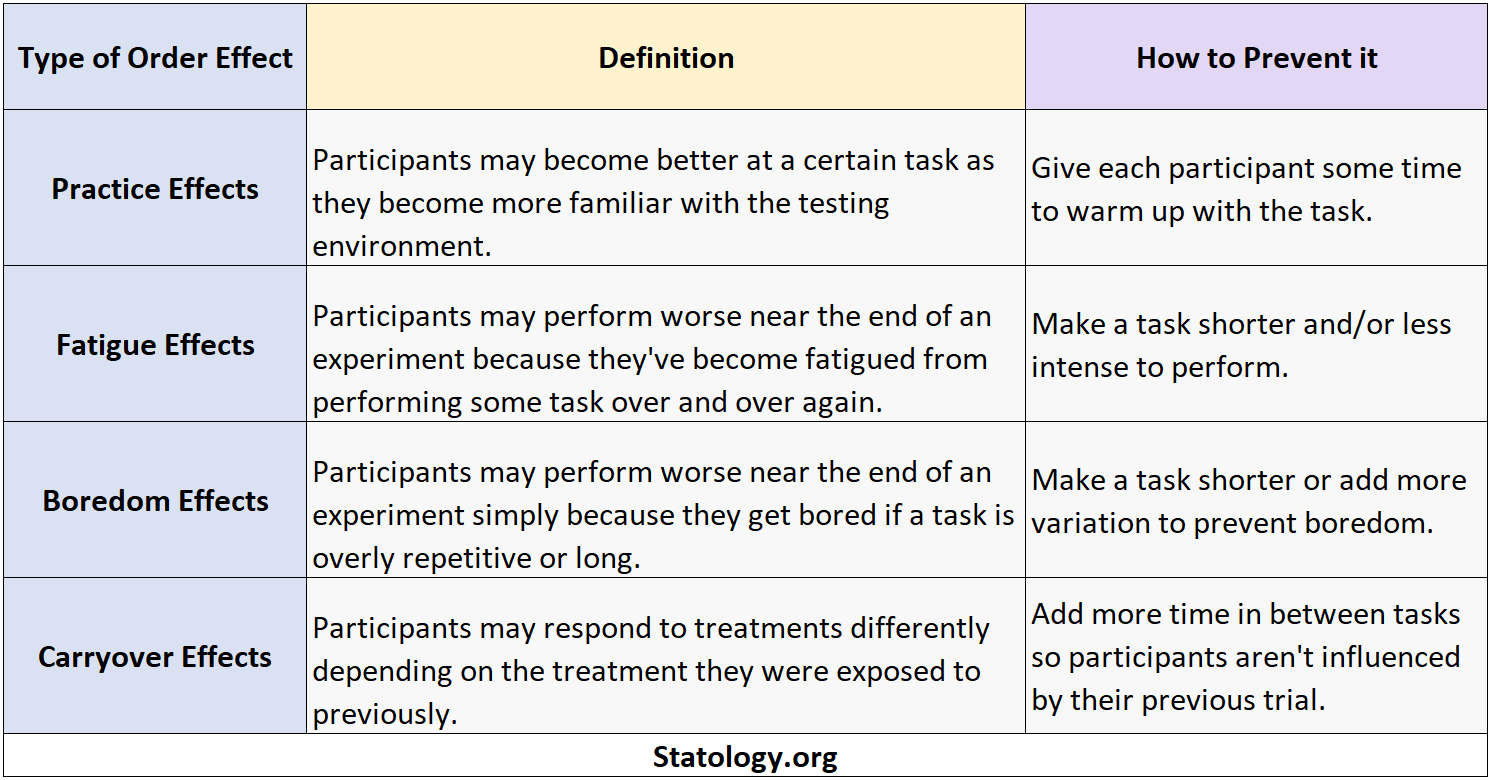 In any experiment involving repeated measurements of the same individuals, researchers can implement counterbalancing – a technique in which every possible order of treatments is used the same number of times.

By using each order the same number of times, we can “counterbalance” any order effects. The downside of this method is that it can be too time-consuming or costly to actually implement every order an equal number of times.