Nonresponse bias can occur for all of these reasons.

Why is Nonresponse Bias a Problem?

Nonresponse bias is a problem for two main reasons:

In order to extrapolate the findings, though, the sample needs to be representative of our population as a whole. Ideally we would like our sample to be a “mini” version of the population.

Unfortunately, nonresponse bias can cause the people in our sample to be significantly different than the people in the larger population.

For example, suppose a city is considering building a new rock climbing facility. To gauge how interested people in the city would be in using this type of facility, city officials send out a short survey via a new smartphone app.

Thus, when the survey results come back it appears that an overwhelming majority of people in the city are interested in having this new facility built. Unfortunately, the results from the survey are not representative of the larger population. 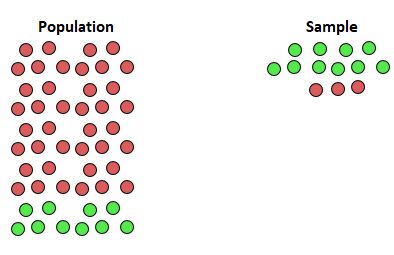 Notice how the sample is not representative of the larger population. The results of the survey would show that most people are excited about a new rock climbing facility. Unfortunately, if city officials assumed that this sample was representative of the population, they may decide to build the facility and then quickly realize that far fewer people would use it than they thought.

The following examples illustrate several cases in which nonresponse bias can occur.

Researchers want to know how computer scientists perceive a new software program. There is pressure to get as much data as possible from the survey, so the researchers design a survey that takes roughly one hour to complete. When they distribute the survey, they find that many computer scientists either don’t respond at all or begin to respond but eventually quit before completing the entire survey.

It turns out that the people who took the time to complete the entire survey turned out to be mostly entry-level computer scientists who were unable to assess the flaws of the program.

Researchers want to learn about alcohol consumption rates at a certain college. They decide to set up a booth on campus where students can stop and take a questionnaire in regards to how much and how often they consume alcohol. Unfortunately, the questionnaire is not anonymous so only students who drink very little or not at all choose to fill out the questionnaire.

When the results come back, it appears that alcohol consumption is low and infrequent among students. Unfortunately, the respondents of the survey are not reflective of the larger population of students on campus and thus the findings are unreliable.

It turns out that of the 10 million questionnaires sent out, only 2.3 million people responded. The 7.7 million who did not respond turned out to be significantly different in terms of political preference.

Thus, the results of the questionnaire were not reflective of the population as a whole, which is why the prediction that Alf Landon would win turned out to be so incorrect.

How to Prevent Nonresponse Bias

Nonresponse bias can be prevented (or at least mitigated) by taking the following steps: