A nested ANOVA is a type of ANOVA (“analysis of variance”) in which at least one factor is nested inside another factor.

For example, suppose we would like to know if three different fertilizers produce different levels of plant growth.

In this scenario, the response variable is plant growth and the two factors are technician and fertilizer. It turns out that technician is nested within fertilizer: 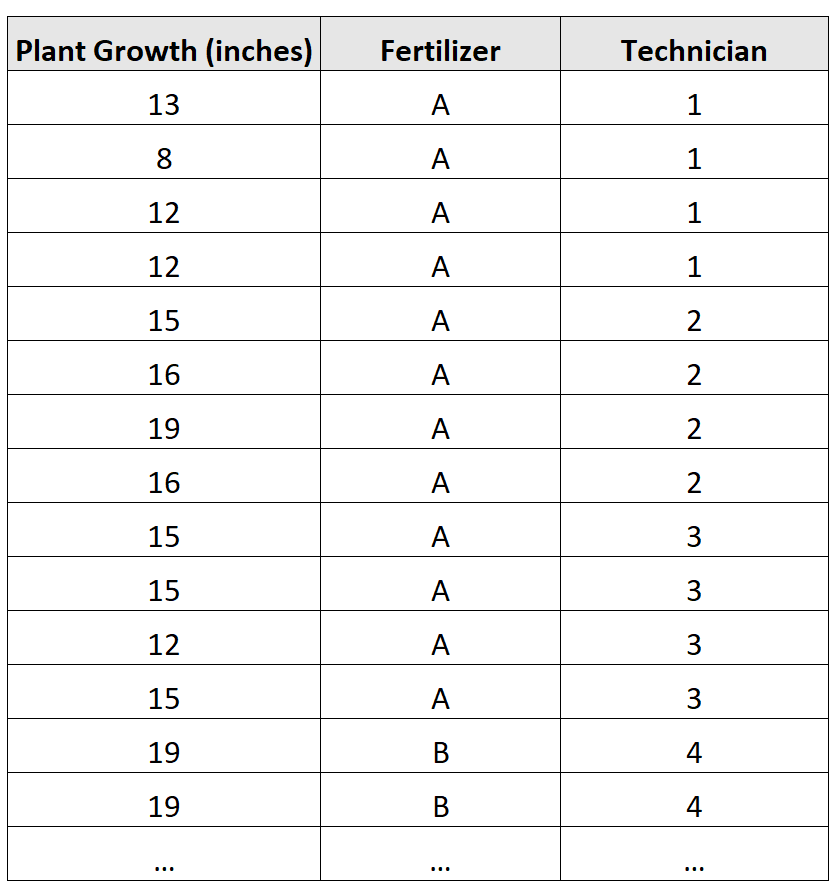 In this scenario, a nested ANOVA can test for two things:

When we perform a nested ANOVA (using statistical software like R, Excel, SPSS, etc.) , the output will be in the following format:

Here’s how to interpret the output:

We can look at the p-value column to determine whether or not each factor has a statistically significant effect on plant growth.

From the table above, we can see that fertilizer has a statistically significant effect on plant growth (p-value < .05) but technician does not (p-value = 0.211).

This tells us that if we’d like to increase plant growth, we should focus on the fertilizer being used rather than the individual technician who is sprinkling the fertilizer.

Here are a few notes to keep in mind about nested ANOVA’s:

1. Nested ANOVA’s can have more than two factors.

For example, in the previous scenario suppose each technician sprinkled each type of fertilizer. In this case, we could perform a two-way ANOVA because every possible combination of technique and fertilizer occurred in the dataset.

How to Perform a Nested ANOVA in Practice

The following tutorials explain how to perform a nested ANOVA in Excel and R: