This guide walks through an example of how to conduct multiple linear regression in R, including:

For this example we will use the built-in R dataset mtcars, which contains information about various attributes for 32 different cars:

In this example we will build a multiple linear regression model that uses mpg as the response variable and disp, hp, and drat as the predictor variables.

Before we fit the model, we can examine the data to gain a better understanding of it and also visually assess whether or not multiple linear regression could be a good model to fit to this data.

In particular, we need to check if the predictor variables have a linear association with the response variable, which would indicate that a multiple linear regression model may be suitable.

To do so, we can use the pairs() function to create a scatterplot of every possible pair of variables:

From this pairs plot we can see the following:

Note that we could also use the ggpairs() function from the GGally library to create a similar plot that contains the actual linear correlation coefficients for each pair of variables: 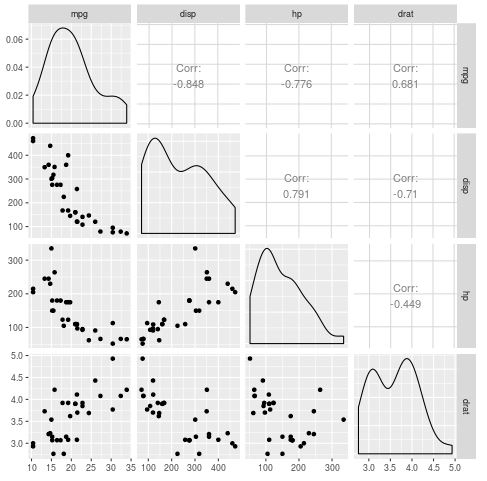 Each of the predictor variables appears to have a noticeable linear correlation with the response variable mpg, so we’ll proceed to fit the linear regression model to the data.

The basic syntax to fit a multiple linear regression model in R is as follows:

Using our data, we can fit the model using the following code:

Checking Assumptions of the Model

Before we proceed to check the output of the model, we need to first check that the model assumptions are met. Namely, we need to verify the following:

1. The distribution of model residuals should be approximately normal.

We can check if this assumption is met by creating a simple histogram of residuals: 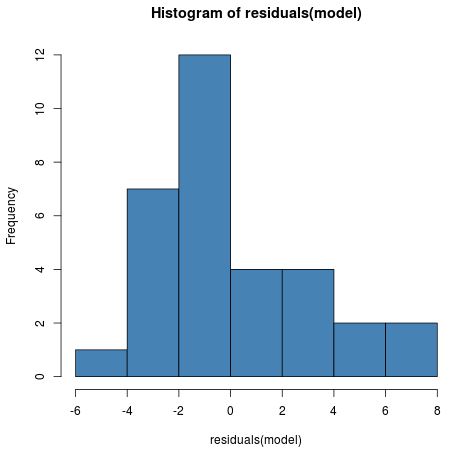 Although the distribution is slightly right skewed, it isn’t abnormal enough to cause any major concerns.

2. The variance of the residuals should be consistent for all observations.

To check if this assumption is met we can create a fitted value vs. residual plot: 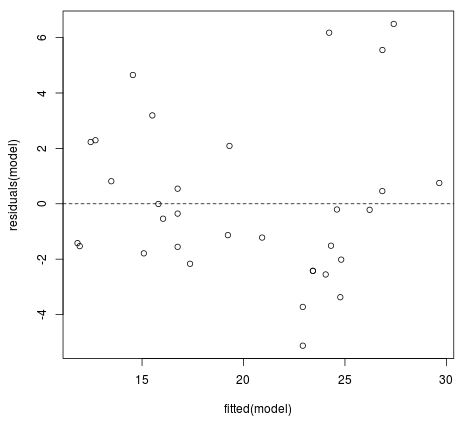 Ideally we would like the residuals to be equally scattered at every fitted value. We can see from the plot that the scatter tends to become a bit larger for larger fitted values, but this pattern isn’t extreme enough to cause too much concern.

Interpreting the Output of the Model

Once we’ve verified that the model assumptions are sufficiently met, we can look at the output of the model using the summary() function:

From the output we can see the following:

Assessing the Goodness of Fit of the Model

To assess how “good” the regression model fits the data, we can look at a couple different metrics:

Using the Model to Make Predictions

From the output of the model we know that the fitted multiple linear regression equation is as follows:

We can use this equation to make predictions about what mpg will be for new observations. For example, we can find the predicted value of mpg for a car that has the following attributes:

You can find the complete R code used in this tutorial here.

The following tutorials explain how to fit other types of regression models in R: