When we analyze a dataset, we often care about two things:

2. How “spread out” the values are. We measure “spread” using range, interquartile range, variance, and standard deviation.

The range is the difference between the largest and smallest value in a dataset.

Suppose we have this dataset of final math exam scores for 20 students:

The interquartile range is the difference between the first quartile and the third quartile in a dataset.

Quartiles are values that split up a dataset into four equal parts. Here is how to find the interquartile range of the following dataset of exam scores:

1. Arrange the values from smallest to largest.

2. Find the median. (In this case, it’s the average of the middle two values)

The interquartile range more resistant to outliers compared to the range, which can make it a better metric to use to measure “spread.”

For example, suppose we have the following dataset with incomes for ten people: 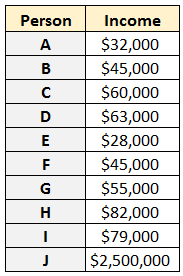 In this case, the outlier income of person J causes the range to be extremely large and makes it a poor indicator of “spread” for these incomes.

The variance is a common way to measure how spread out data values are.

The formula to find the variance of a population (denoted as σ2) is:

Usually we work with samples, not populations. And the formula to find the variance of a sample (denoted as s2) is:

The standard deviation is the square root of the variance. It’s the most common way to measure how “spread out” data values are.

The formula to find the standard deviation of a population (denoted as σ ) is:

And the formula to find the standard deviation of a sample (denoted as s) is: