A uniform distribution is a probability distribution in which every value between an interval from a to b is equally likely to be chosen.

The probability that we will obtain a value between x1 and x2 on an interval from a to b can be found using the formula: 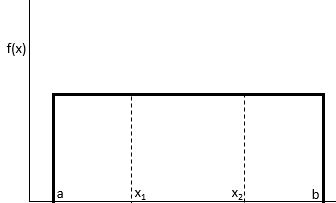 This tutorial explains how to find the maximum likelihood estimate (mle) for parameters a and b of the uniform distribution.

For a uniform distribution, the likelihood function can be written as:

The derivative of the log-likelihood function with respect to a can be written as:

Similarly, the derivative of the log-likelihood function with respect to b can be written as:

Step 4: Identify the maximum likelihood estimators for a and b.

Notice that the derivative with respect to a is monotonically increasing. Thus, the mle for a would be the largest a possible, which would simply be:

Also notice that the derivative with respect to b is monotonically decreasing. Thus, the mle for b would be the smallest b possible, which would be: