A matched pairs design is an experimental design that is used when an experiment only has two treatment conditions. The subjects in the experiment are grouped together into pairs based on some variable they “match” on, such as age or gender. Then, within each pair, subjects are randomly assigned to different treatments

Example of a Matched Pairs Design

Suppose researchers want to know how a new diet affects weight loss compared to a standard diet. Since this experiment only has two treatment conditions (new diet and standard diet), they can use a matched pairs design.

They recruit 100 subjects, then group the subjects into 50 pairs based on their age and gender. For example: 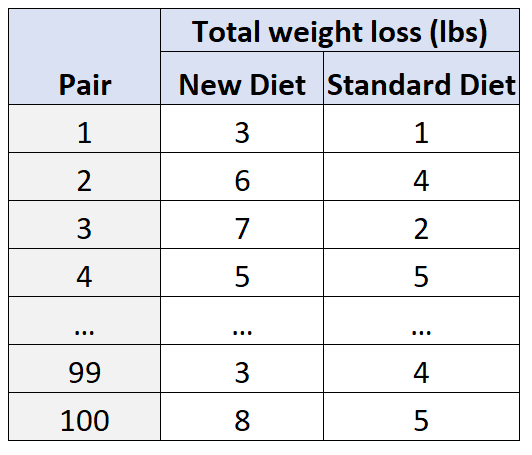 There are some notable advantages and some potential disadvantages of using a matched pairs design.

A lurking variable is a variable that is not accounted for in an experiment that could potentially affect the outcomes of the experiment.

Thus, any difference in weight loss that we observe can be attributed to the diet, as opposed to age or gender.

2. Eliminates order effect. Order effect refers to differences in outcomes due to the order in which experimental materials are presented to subjects. By using a matched pairs design, you don’t have to worry about order effect since each subject only receives one treatment.

1. Losing two subjects if one drops out. If one subject decides to drop out of the study, you actually lose two subjects since you no longer have a complete pair.

3. Impossible to match subjects perfectly. No matter how hard researchers try, there will always be some variation within the subjects in each pair. The only way to match perfectly is to find identical twins who essentially share the same genetic code, which is actually why identical twins are often used in matched pairs studies.

Advantages of Using Ranges in a Matched Pairs Design

One way to make it slightly easier to find subjects that match is to use ranges for the variables you’re attempting to match on.

Using ranges has pros and cons. The obvious pro is that you can find matches more easily, but the con is that the subjects will match less precisely. For example, using the approach above it’s possible for a 21-year-old and a 25-year-old to be matched up, which is a rather notable difference in age. This is a trade-off that researchers must decide is worth or not in order to find pairs more easily.