Mallows’ Cp is a metric that is used to pick the best regression model among several different models.

We can identify the “best” regression model by identifying the model with the lowest Cp value that is less than P+1, where P is the number of predictor variables in the model.

The following example shows how to use Mallows’ Cp to pick the best regression model among several potential models.

Suppose a professor would like to use hours studied, prep exams taken, and current GPA as predictor variables in a regression model to predict the score that a student will receive on the final exam.

He fits seven different regression models and calculates the value for Mallows’ Cp for each model: 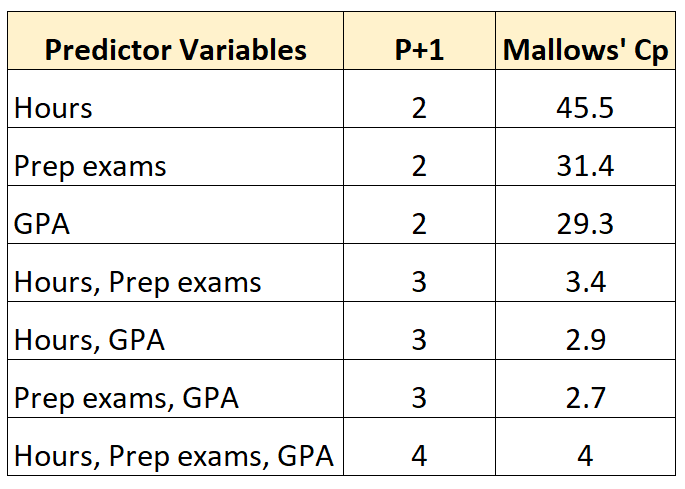 If the value of Mallows’ Cp is less than the number of coefficients in the model (P+1) then the model is said to be unbiased.

We can see that there are two models that are unbiased:

Among these two models, the model that uses Prep Exams and GPA as the predictor variables has the lowest value for Mallows’ Cp, which tells us that it’s the best model that leads to the least amount of bias.

Here are few things to keep in mind with regards to Mallows’ Cp:

Also keep in mind that Mallows’ Cp is only one way to measure the quality of fit of a regression model.

When deciding which regression model is best among a list of several different models, it’s a good idea to look at both Mallows’ Cp and adjusted R-squared.