Logistic regression uses a method known as maximum likelihood estimation to find an equation of the following form:

The formula on the right side of the equation predicts the log odds of the response variable taking on a value of 1.

Thus, when we fit a logistic regression model we can use the following equation to calculate the probability that a given observation takes on a value of 1:

We then use some probability threshold to classify the observation as either 1 or 0.

This tutorial provides a step-by-step example of how to perform logistic regression in R.

For this example, we’ll use the Default dataset from the ISLR package. We can use the following code to load and view a summary of the dataset:

This dataset contains the following information about 10,000 individuals:

We will use student status, bank balance, and income to build a logistic regression model that predicts the probability that a given individual defaults.

Next, we’ll use the glm (general linear model) function and specify family=”binomial” so that R fits a logistic regression model to the dataset:

The p-values in the output also give us an idea of how effective each predictor variable is at predicting the probability of default:

We can see that balance and student status seem to be important predictors since they have low p-values while income is not nearly as important.

In typical linear regression, we use R2 as a way to assess how well a model fits the data. This number ranges from 0 to 1, with higher values indicating better model fit.

However, there is no such R2 value for logistic regression. Instead, we can compute a metric known as McFadden’s R2, which ranges from 0 to just under 1. Values close to 0 indicate that the model has no predictive power. In practice, values over 0.40 indicate that a model fits the data very well.

We can compute McFadden’s R2 for our model using the pR2 function from the pscl package:

A value of 0.4728807 is quite high for McFadden’s R2, which indicates that our model fits the data very well and has high predictive power.

We can also compute the importance of each predictor variable in the model by using the varImp function from the caret package:

Higher values indicate more importance. These results match up nicely with the p-values from the model. Balance is by far the most important predictor variable, followed by student status and then income.

We can also calculate the VIF values of each variable in the model to see if multicollinearity is a problem:

Step 4: Use the Model to Make Predictions

Once we’ve fit the logistic regression model, we can then use it to make predictions about whether or not an individual will default based on their student status, balance, and income:

We can use the following code to calculate the probability of default for every individual in our test dataset:

Lastly, we can analyze how well our model performs on the test dataset.

By default, any individual in the test dataset with a probability of default greater than 0.5 will be predicted to default. However, we can find the optimal probability to use to maximize the accuracy of our model by using the optimalCutoff() function from the InformationValue package:

Using this threshold, we can create a confusion matrix which shows our predictions compared to the actual defaults:

The total misclassification error rate is 2.7% for this model. In general, the lower this rate the better the model is able to predict outcomes, so this particular model turns out to be very good at predicting whether an individual will default or not.

Lastly, we can plot the ROC (Receiver Operating Characteristic) Curve which displays the percentage of true positives predicted by the model as the prediction probability cutoff is lowered from 1 to 0. The higher the AUC (area under the curve), the more accurately our model is able to predict outcomes: 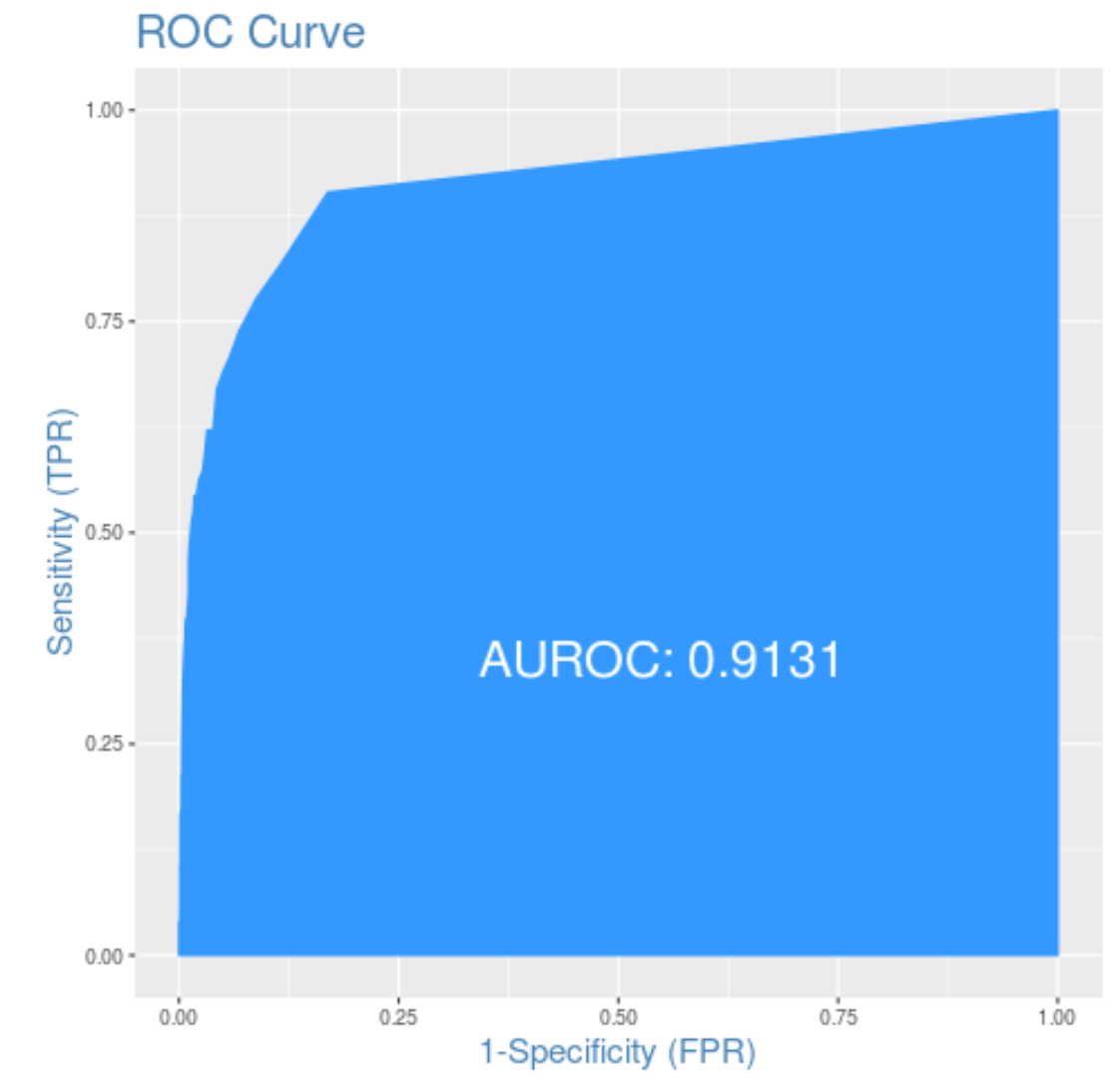 We can see that the AUC is 0.9131, which is quite high. This indicates that our model does a good job of predicting whether or not an individual will default.