The most commonly used correlation coefficient is the Pearson Correlation Coefficient, which measures the linear association between two numerical variables.

One less commonly used correlation coefficient is Kendall’s Tau, which measures the relationship between two columns of ranked data.

The formula to calculate Kendall’s Tau, often abbreviated τ, is as follows:

C = the number of concordant pairs

D = the number of discordant pairs

The following example illustrates how to use this formula to calculate Kendall’s Tau rank correlation coefficient for two columns of ranked data.

Suppose two basketball coaches rank 12 of their players from worst to best. The following table shows the rankings that each coach assigned to the players: 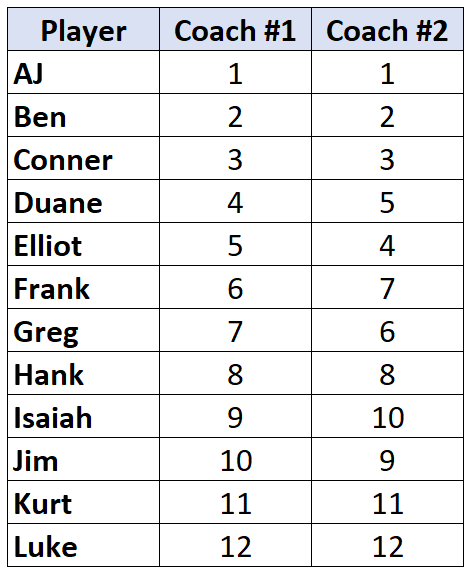 Look only at the ranks for Coach #2. Starting with the first player, count how many ranks below him are larger. For example, there are 11 numbers below “1” that are larger, so we’ll write 11: 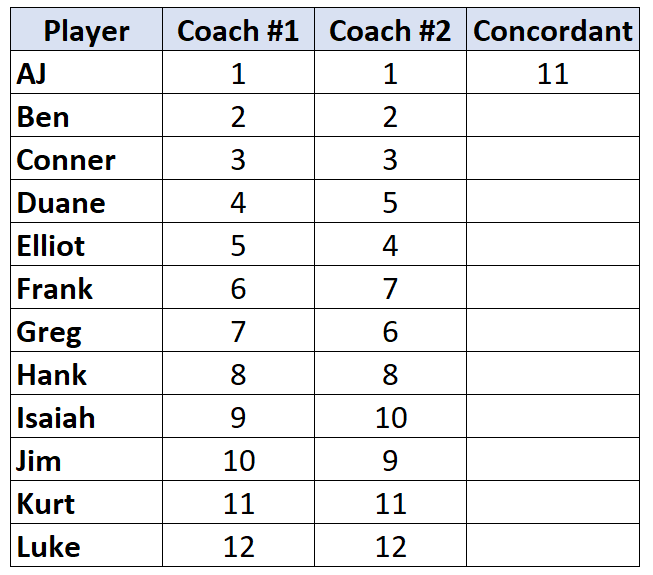 Move to the next player and repeat the process. There are 10 numbers below “2” that are larger, so we’ll write 10: 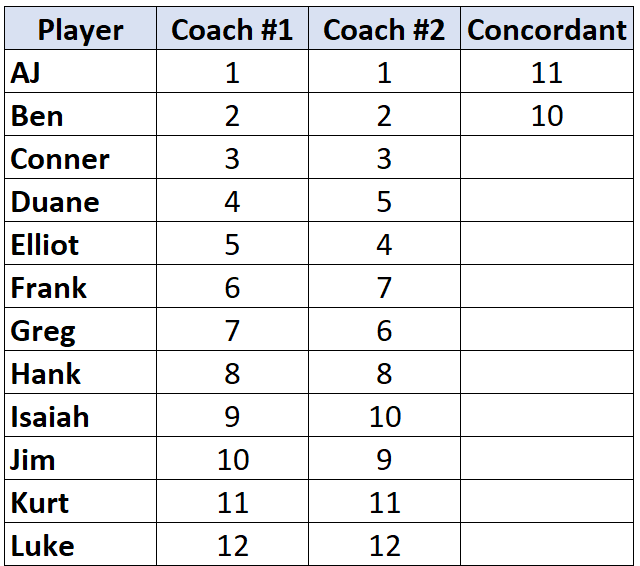 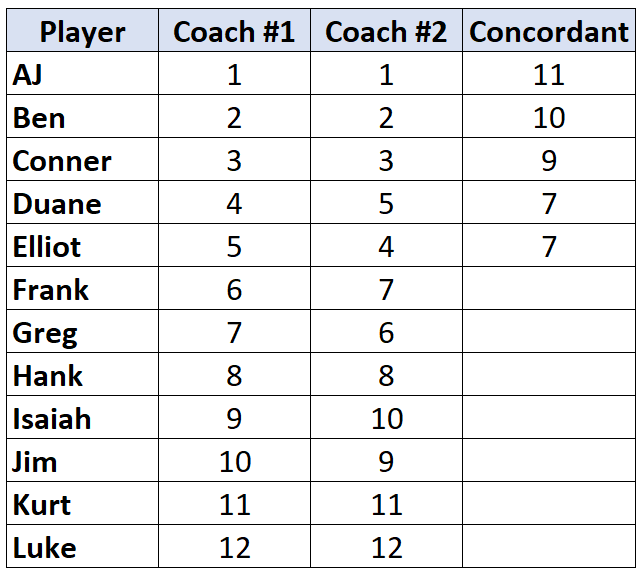 Repeat this process for all of the players: 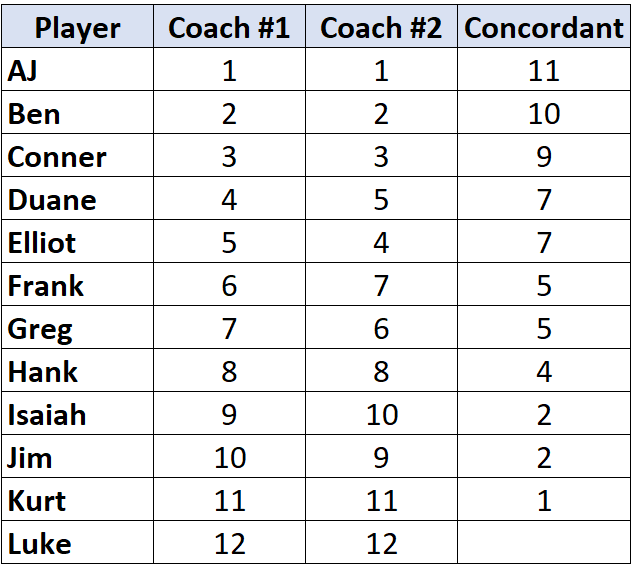 Again, look only at the ranks for Coach #2. For each player, count how many ranks below him are smaller. For example, Coach #2 assigned AJ a rank of “1” and there are no players below him with a smaller rank. Thus, we assign him a value of 0: 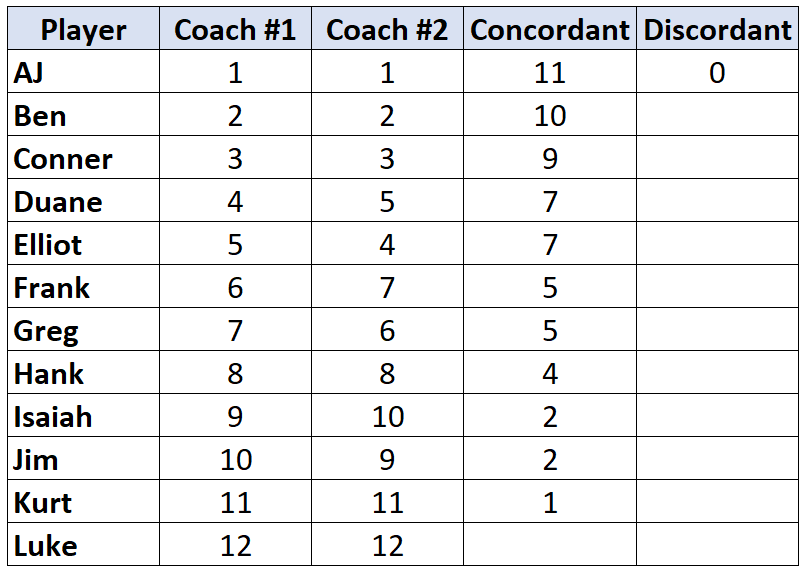 Repeat this process for each player: 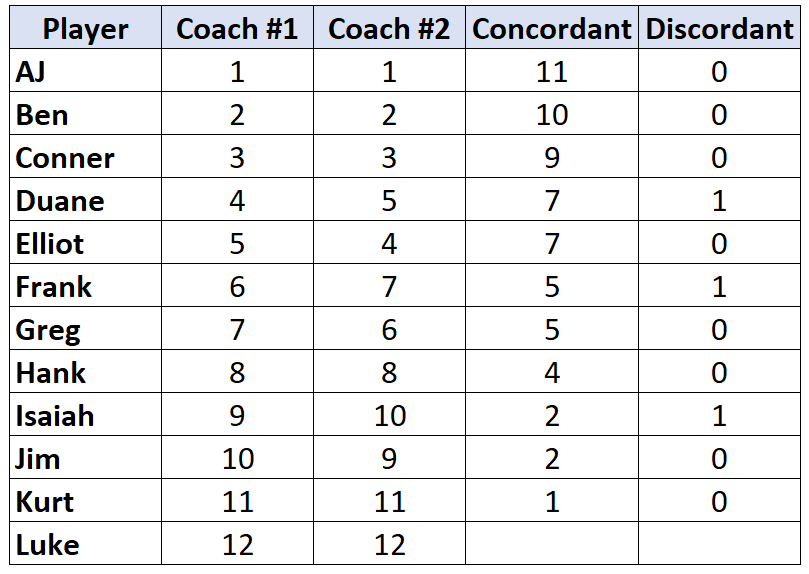 Step 3: Calculate the sum of each column and find Kendall’s Tau. 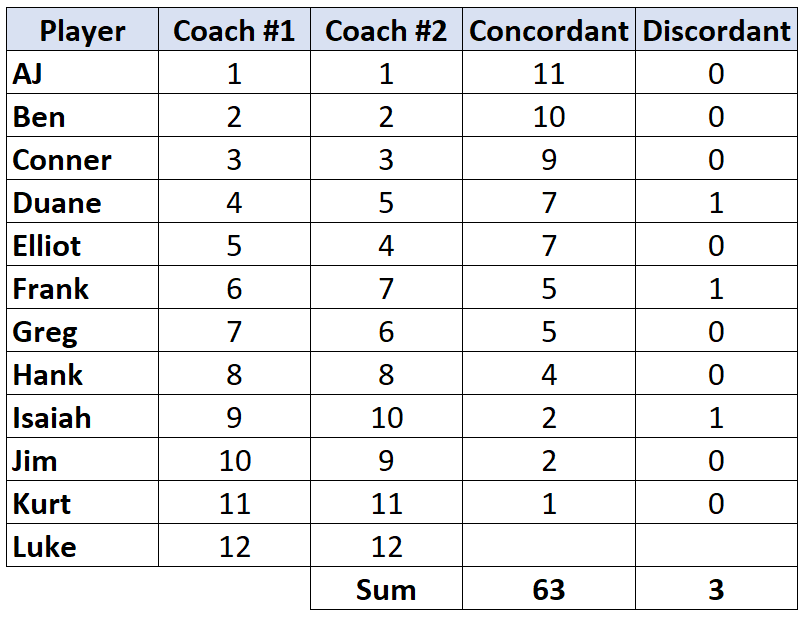 When you have more than n= 10 pairs, Kendall’s Tau generally follows a normal distribution. You can use the following formula to calculate a z-score for Kendall’s Tau:

Here’s how to calculate z for the previous example:

Bonus: How to Calculate Kendall’s Tau in R

In the statistical software R, you can use the kendall.tau() function from the VGAM library to calculate Kendall’s Tau for two vectors, which uses the following syntax:

where x and y are two numerical vectors of equal lenghth.

The following code illustrates how to calculate Kendall’s Tau for the exact data that we used in the previous example:

Notice how the value for Kendall’s Tau matches the value that we calculated by hand.