Clustering is a technique in machine learning that attempts to find groups or clusters of observations within a dataset.

One of the most common forms of clustering is known as k-means clustering.

Unfortunately, this method can be influenced by outliers so an alternative that is often used is k-medoids clustering.

What is K-Medoids Clustering?

K-medoids clustering is a technique in which we place each observation in a dataset into one of K clusters.

In practice, we use the following steps to perform K-means clustering:

2. Randomly assign each observation to an initial cluster, from 1 to K.

3. Perform the following procedure until the cluster assignments stop changing.

Because k-medoids computes cluster centroids using medians instead of means, it tends to be more robust to outliers compared to k-means.

In practice, if there are no extreme outliers in the dataset then k-means and k-medoids will produce similar results.

The following tutorial provides a step-by-step example of how to perform k-medoids clustering in R.

To perform k-medoids clustering in R we can use the pam() function, which stands for “partitioning around medians” and uses the following syntax:

Since we don’t know beforehand how many clusters is optimal, we’ll create two different plots that can help us decide:

1. Number of Clusters vs. the Total Within Sum of Squares

First, we’ll use the fviz_nbclust() function to create a plot of the number of clusters vs. the total within sum of squares: 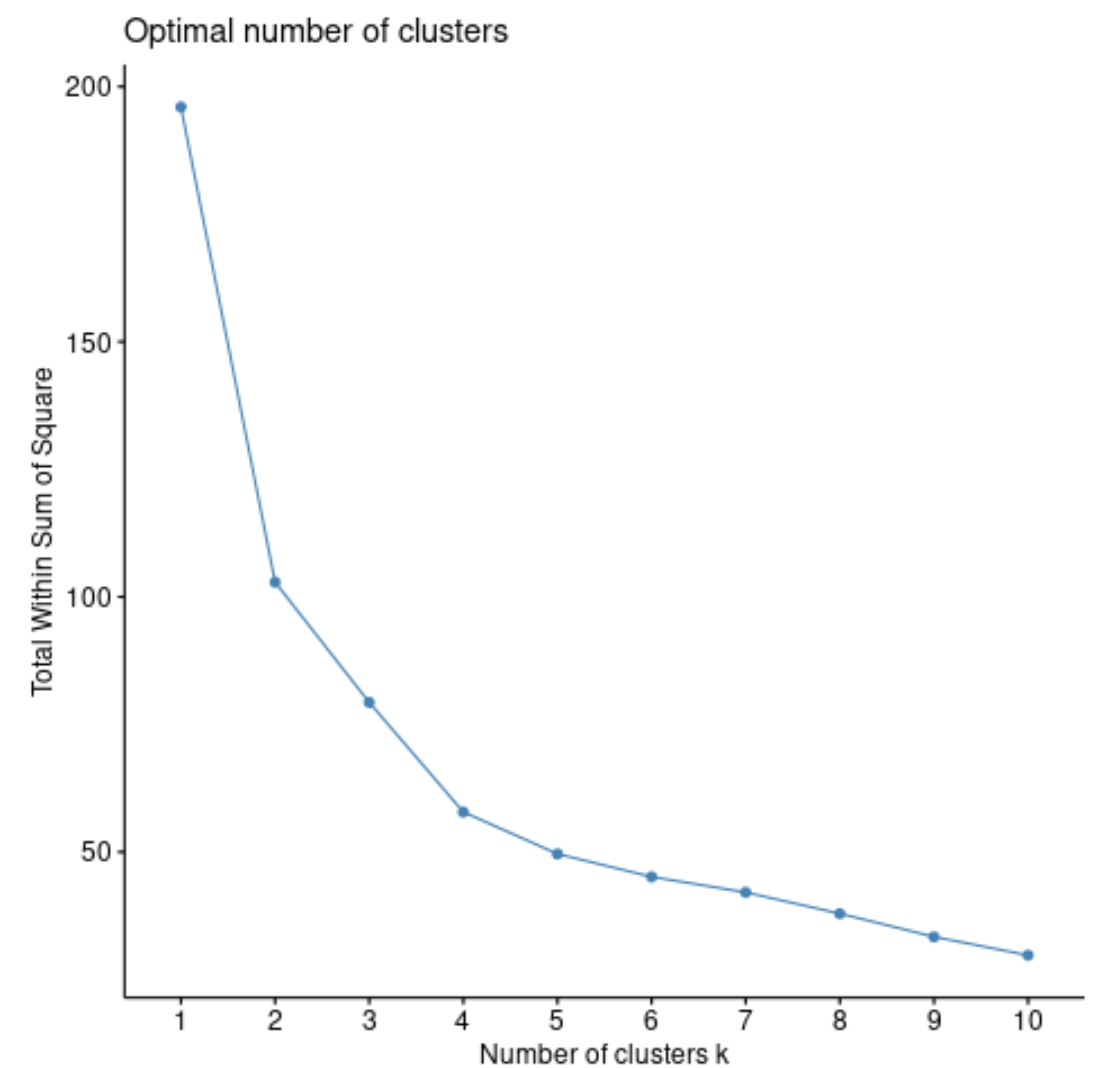 The total within sum of squares will typically always increase as we increase the number of clusters, so when we create this type of plot we look for an “elbow” where the sum of squares begins to “bend” or level off.

The point where the plot bends is typically the optimal number of clusters. Beyond this number, overfitting is likely to occur.

For this plot it appear that there is a bit of an elbow or “bend” at k = 4 clusters.

2. Number of Clusters vs. Gap Statistic

Another way to determine the optimal number of clusters is to use a metric known as the gap statistic, which compares the total intra-cluster variation for different values of k with their expected values for a distribution with no clustering. 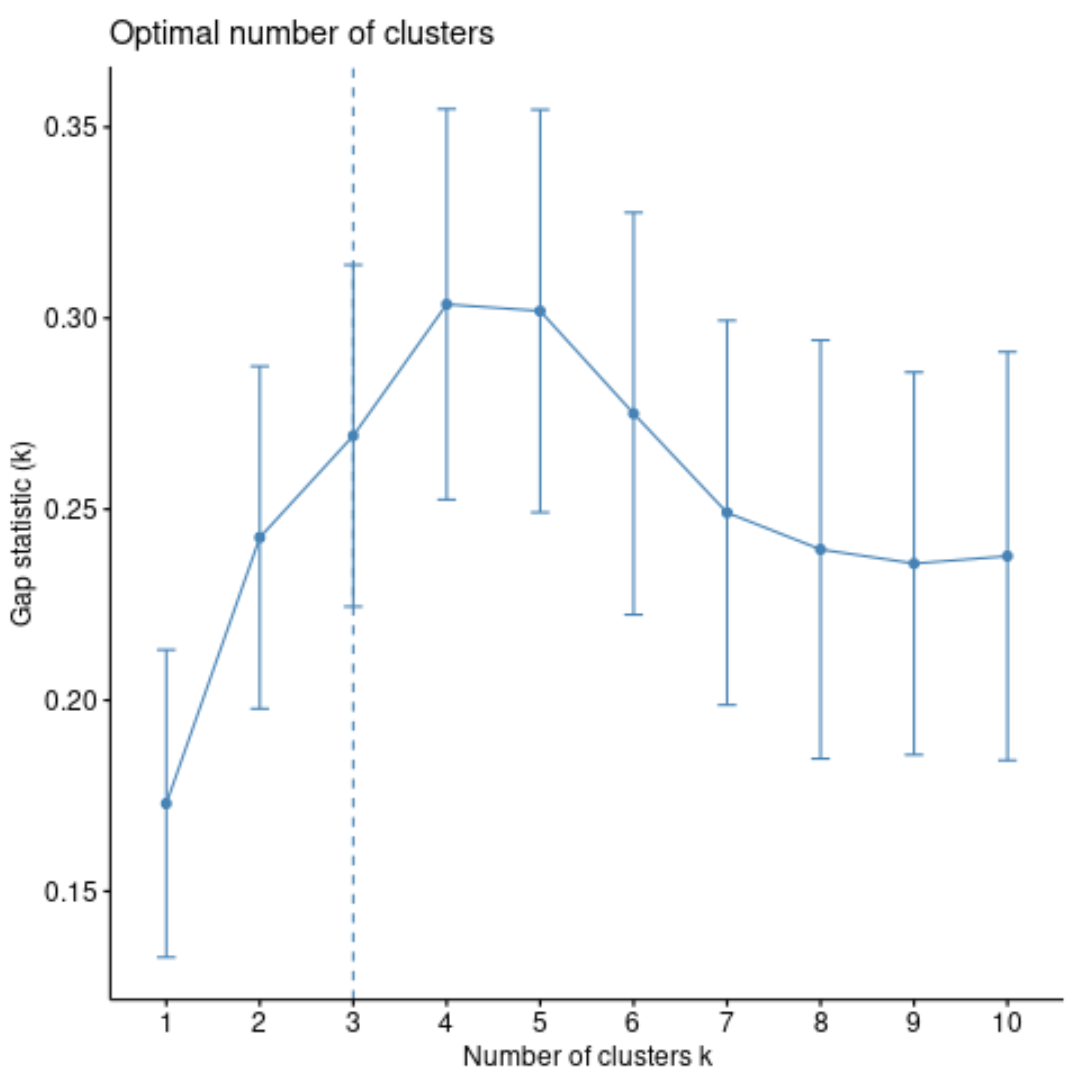 From the plot we can see that gap statistic is highest at k = 4 clusters, which matches the elbow method we used earlier.

Lastly, we can perform k-medoids clustering on the dataset using the optimal value for k of 4:

We can visualize the clusters on a scatterplot that displays the first two principal components on the axes using the fivz_cluster() function: 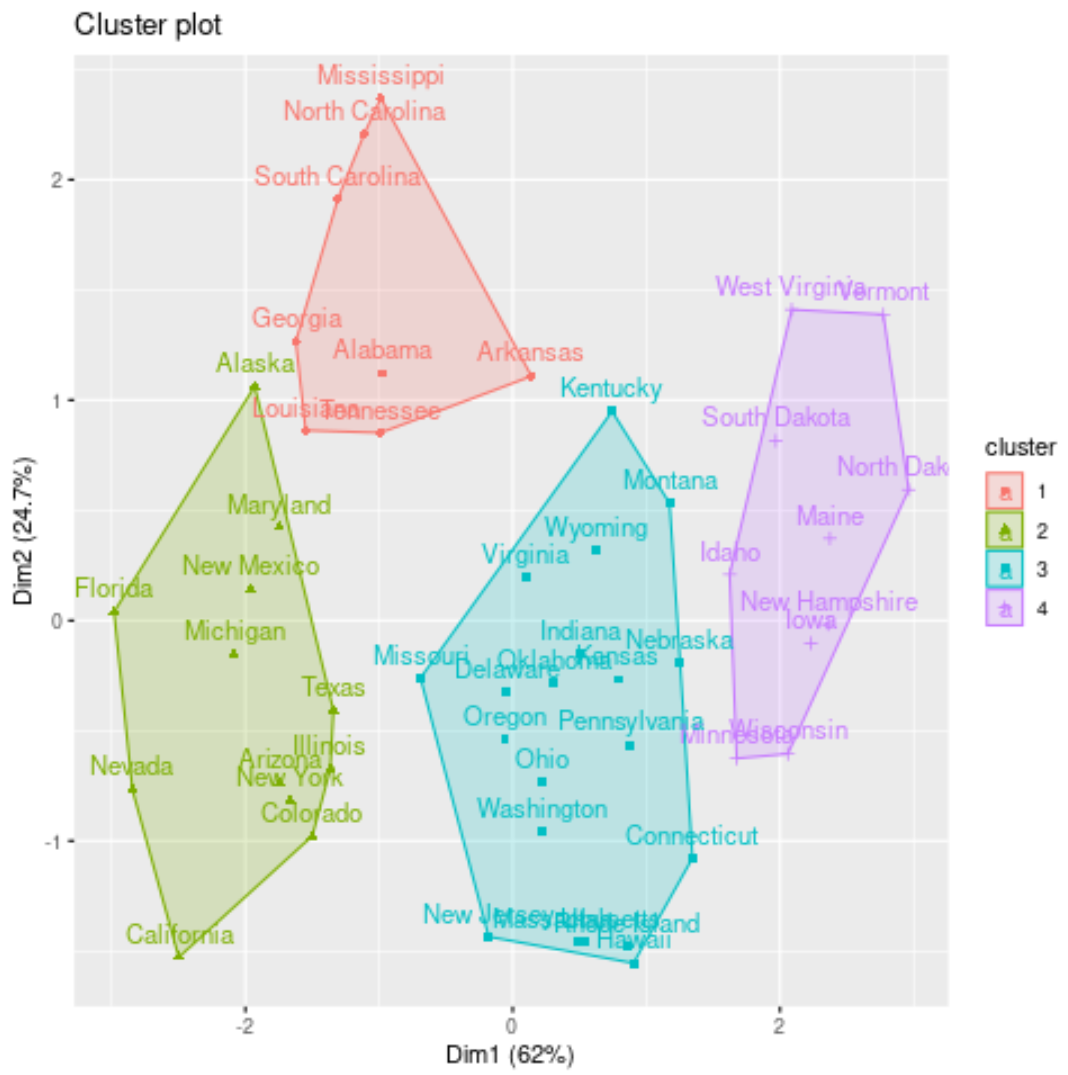 We can also append the cluster assignments of each state back to the original dataset: