In statistics, all variables are measured on one of four measurement scales:

The following graphic summarizes these different levels of measurement: 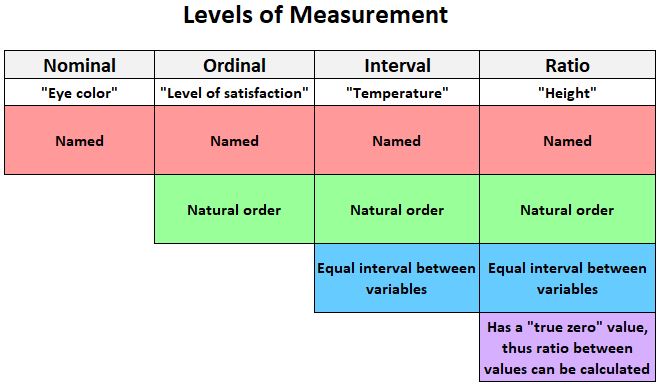 One question students often have is:

Is “time” considered an interval or ratio variable?

Time is considered an interval variable because differences between all time points are equal but there is no “true zero” value for time.

However, there is not “true zero” value of time. For example, we can’t say that 2 PM is twice as old of a time as 1 PM.

Contrast this with a ratio variable like weight: We can say that 100 pounds is twice as much as 50 pounds. The same cannot be said for time.

When is Time Not an Interval Variable?

The only scenario where time would not be considered an interval variable is if we’re talking about a duration of time.

Suppose we keep track of how long it takes people to run a marathon. In this scenario, the duration of time would be considered a ratio variable because there is a “true zero” value – zero seconds.

In this scenario, the duration of cooking time would be considered a ratio variable because there is a true zero value – zero minutes.

We could also say that one recipe has a cooking time that is twice as long as the other.

These represent scenarios where we would classify time as a ratio variable instead  of an interval variable.

The following tutorials offer additional information on types of variables:

Levels of Measurement: Nominal, Ordinal, Interval and Ratio
Is Age a Discrete or Continuous Variable?
Categorical vs. Quantitative Variables