An intraclass correlation coefficient (ICC) is used to measure the reliability of ratings in studies where there are two or more raters.

In simple terms, an ICC is used to determine if items (or subjects) can be rated reliably by different raters.

There are several different versions of an ICC that can be calculated, depending on the following three factors:

Here’s a brief description of the three different models:

2. Two-way random effects model: This model assumes that a group of k raters is randomly selected from a population and then used to rate subjects. Using this model, both the raters and the subjects are considered sources of random effects. This model is often used when we’d like to generalize our findings to any raters who are similar to the raters used in the study.

3. Two-way mixed effects model: This model also assumes that a group of k raters is randomly selected from a population and then used to rate subjects. However, this model assumes that the group of raters we chose are the only raters of interest, which means we aren’t interested in generalizing our findings to any other raters who might also share similar characteristics as the raters used in the study.

Here’s a brief description of the two different types of relationships we might be interested in measuring:

1. Consistency: We are interested in the systematic differences between the ratings of judges (e.g. did the judges rate similar subjects low and high?)

1. Single rater: We are only interested in using the ratings from a single rater as the basis for measurement.

2. Mean of raters: We are interested in using the mean of ratings from all judges as the basis for measurement.

Note: If you want to measure the level of agreement between two raters who each rate items on a dichotomous outcome, you should instead use Cohen’s Kappa.

How to Interpret Intraclass Correlation Coefficient

Here is how to interpret the value of an intraclass correlation coefficient, according to Koo & Li:

The following example shows how to calculate an intraclass correlation coefficient in practice.

Suppose four different judges were asked to rate the quality of 10 different college entrance exams. The results are shown below: 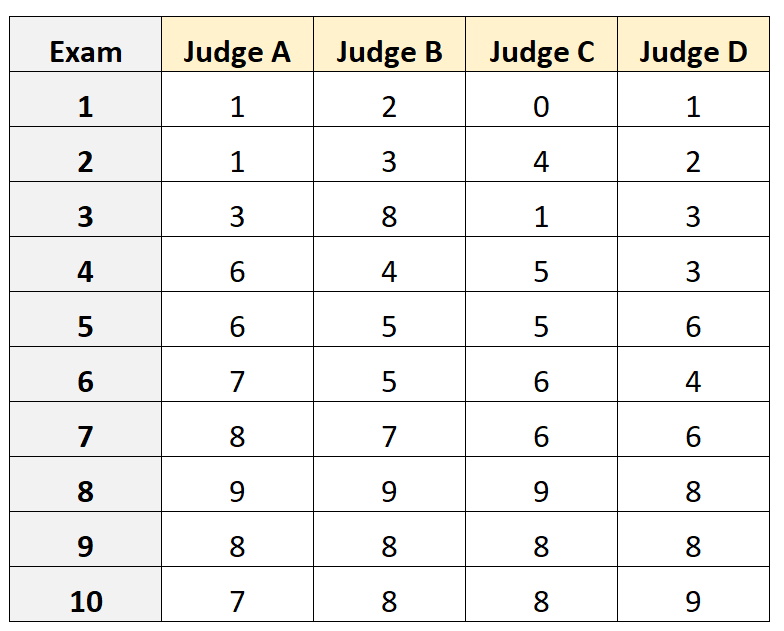 Suppose the four judges were randomly selected from a population of qualified entrance exam judges and that we’d like to measure the absolute agreement among judges and that we’re interested in using the ratings from a single rater perspective as the basis for our measurement.

We can use the following code in R to fit a two-way random effects model, using absolute agreement as the relationship among raters, and using single as our unit of interest:

The intraclass correlation coefficient (ICC) turns out to be 0.782.

Based on the rules of thumb for interpreting ICC, we would conclude that an ICC of 0.782 indicates that the exams can be rated with “good” reliability by different raters.

The following tutorials provide in-depth explanations of how to calculate ICC in different statistical software: