A two-way ANOVA is used to determine if there is a difference between the means of three or more independent groups that have been split on two factors.

We use a two-way ANOVA when we’d like to know if two specific factors affect a certain response variable.

However, sometimes there is an interaction effect present between the two factors, which can impact the way we interpret the relationship between the factors and the response variable.

For example, we might want to know if the factors (1) exercise and (2) gender affect the response variable weight loss. While it’s possible that both factors affect weight loss, it’s also possible that the two factors interact with each other.

For example, it’s possible that exercise leads to weight loss at different rates for males and females. In this case, there is an interact effect between exercise and gender.

The easiest way to detect and understand interaction effects between two factors is with an interaction plot.

This is a type of plot that displays the fitted values of a response variable on the y-axis and the values of the first factor on the x-axis. Meanwhile, the lines in the plot represent the values of the second factor of interest. 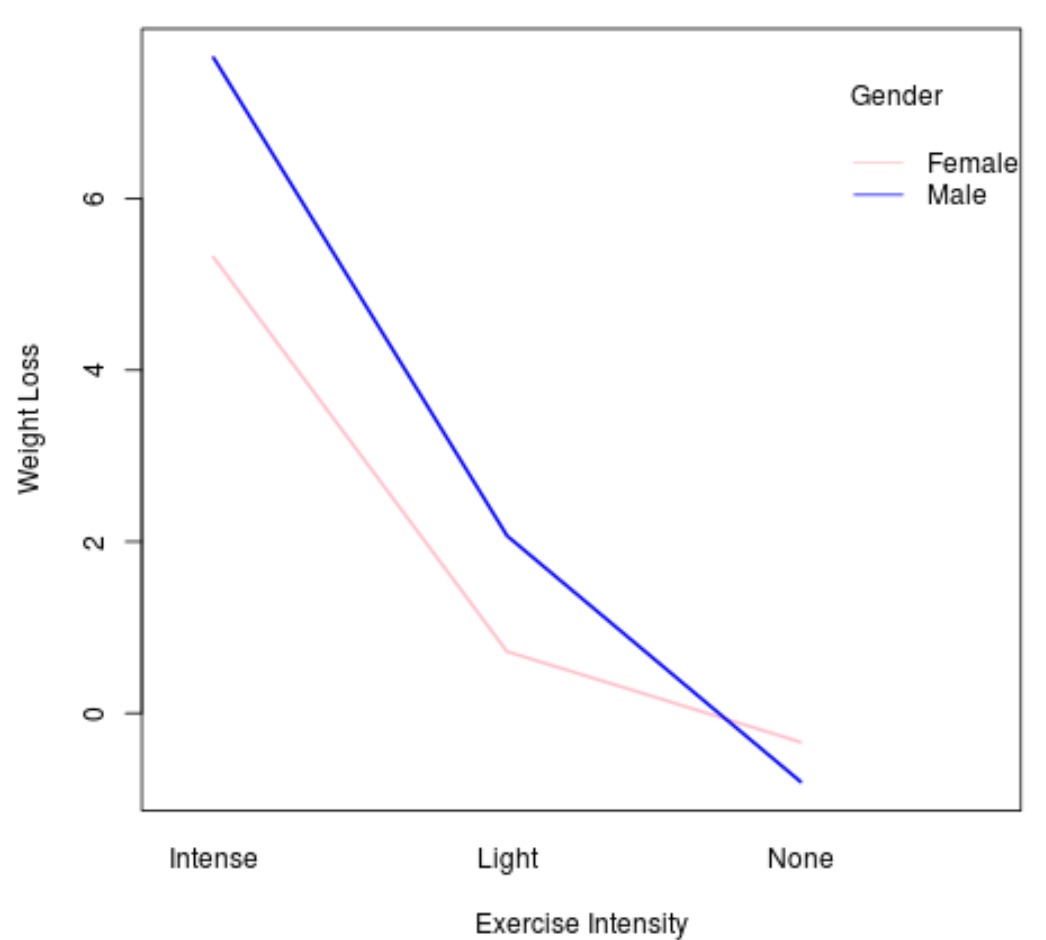 This tutorial explains how to create and interpret an interaction plot in R.

Suppose researchers want to determine if exercise intensity and gender impact weight loss. To test this, they recruit 30 men and 30 women to participate in an experiment in which they randomly assign 10 of each to follow a program of either no exercise, light exercise, or intense exercise for one month.

Use the following steps to create a data frame in R, perform a two-way ANOVA, and create an interaction plot to visualize the interaction effect between exercise and gender.

The following code shows how to create a data frame in R:

The following code shows how to fit a two-way ANOVA to the data:

Note that the p-value (0.0141) for the interaction term between exercise and gender is statistically significant, which indicates that there is a significant interaction effect between the two factors.

The following code shows how to create an interaction plot for exercise and gender:

We can see in this plot that the lines for males and females do intersect, which indicates that there is likely an interaction effect between the variables of exercise intensity and gender.

This matches the fact that the p-value in the output of the ANOVA table was statistically significant for the interaction term in the ANOVA model.