Often in statistics we’re interested in estimating the effect that one variable has on another. For example, perhaps we want to know:

In each scenario, we want to understand whether or not some predictor variable affects a response variable. However, often there will be other variables that affect the relationship between the two variables.

For example, suppose we use a certain drug as our predictor variable and blood pressure as our response variable. We are only interested in the effect that the drug has on blood pressure:

Thus, if we run a simple linear regression using the drug as our predictor variable and blood pressure as our response variable, we can’t be sure that the regression coefficients will accurately capture the effect that the drug has on blood pressure because outside factors (exercise, diet, stress, etc.) could also be playing a role.

One potential way to get around this problem is to use an instrumental variable.

What is an Instrumental Variable?

For example, suppose we want to estimate the effect that a certain drug has on blood pressure:

An example of an instrumental variable that we may use in this regression analysis is an individual’s proximity to a pharmacy.

This variable “proximity” would likely be highly correlated with whether or not the individual takes the certain drug because an individual wouldn’t be able to obtain it in the first place if they don’t live near a pharmacy. 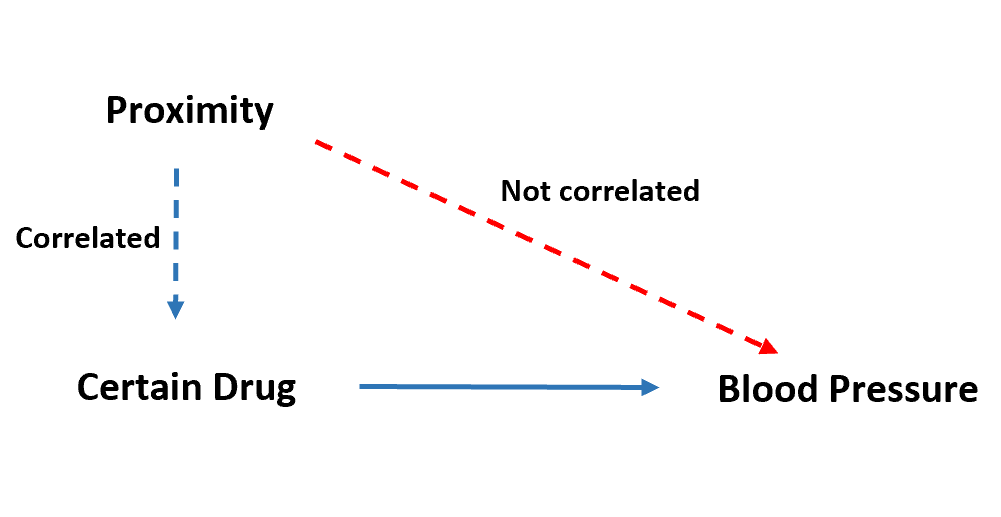 Instrumental variables regression (or two-stage least squares regression) uses the following approach to estimate the effect that a predictor variable has on a response variable:

Stage 1: Fit a regression model using the instrumental variable as the predictor variable.

In our specific example, we would first fit the following regression model:

We would then be left with predicted values for certain drug (cd), which we’ll call cdhat.

If the regression coefficient for cdhat turns out to be statistically significant, then we can say that there is a causal effect of the drug on blood pressure.

The reason we can say this is because we solely used “proximity” to come up with cdhat and since we know that proximity should not be correlated with blood pressure, any significant correlation in the second stage regression can be attributed to the certain drug.

An instrumental variable should only be used if it meets the following criteria:

If an instrumental variable does not meet this criteria, then it should not be used in the regression model because it will likely produce unreliable and biased results.