In statistics, we’re often interested in understanding the relationship between two variables.

For example, we might want to understand the relationship between the number of hours a student studies and the exam score they receive.

One way to quantify this relationship is to use the Pearson correlation coefficient, which is a measure of the linear association between two variables. It has a value between -1 and 1 where:

Related: What is Considered to Be a “Strong” Correlation?

Example of a Correlation Matrix

And the highlighted cell below shows that the correlation between “hours spent sleeping” and “IQ score” is 0.06, which indicates that they’re basically not correlated. There is very little association between the number of hours a student sleeps and their IQ score.

Also notice that the correlation coefficients along the diagonal of the table are all equal to 1 because each variable is perfectly correlated with itself. These cells aren’t useful for interpretation.

Variations of the Correlation Matrix

Notice that a correlation matrix is perfectly symmetrical. For example, the top right cell shows the exact same value as the bottom left cell:

This is because both cells are measuring the correlation between “hours spent studying” and “school rating.”

And sometimes a correlation matrix will be colored in like a heat map to make the correlation coefficients even easier to read:

When to Use a Correlation Matrix

In practice, a correlation matrix is commonly used for three reasons:

A correlation matrix is a simple way to summarize the correlations between all variables in a dataset. For example, suppose we have the following dataset that has the following information for 1,000 students: 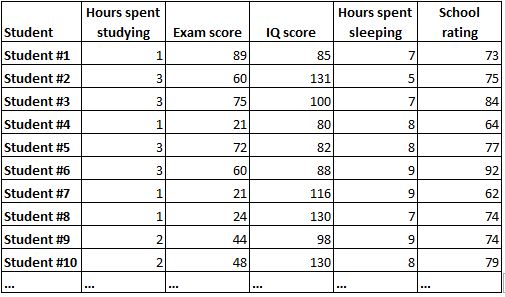 2. A correlation matrix serves as a diagnostic for regression.

When two independent variables are highly correlated, this results in a problem known as multicollinearity and it can make it hard to interpret the results of the regression.

One of the easiest ways to detect a potential multicollinearity problem is to look at a correlation matrix and visually check whether any of the variables are highly correlated with each other.

3. A correlation matrix can be used as an input in other analyses.

A correlation matrix is used as an input for other complex analyses such as exploratory factor analysis and structural equation models.