The formula for Cook’s distance is:

Although the formula looks a bit complicated, the good news is that most statistical softwares can easily compute this for you.

Essentially, Cook’s Distance does one thing: it measures how much all of the fitted values in the model change when the ith data point is deleted.

A data point that has a large value for Cook’s Distance indicates that it strongly influences the fitted values. A general rule of thumb is that any point with a Cook’s Distance over 4/n (where n is the total number of data points) is considered to be an outlier.

It’s important to note that Cook’s Distance is often used as a way to identify influential data points. Just because a data point is influential doesn’t mean it should necessarily be deleted – first you should check to see if the data point has simply been incorrectly recorded or if there is something strange about the data point that may point to an interesting finding.

How to Calculate Cook’s Distance in R

The following example illustrates how to calculate Cook’s Distance in R.

Next, we’ll define two data frames: one with two outliers and one with no outliers.

Next, we’ll create a scatterplot to display the two data frames side by side: 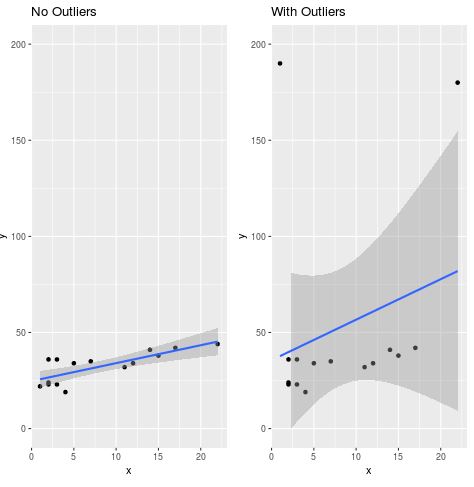 We can see how outliers negatively influence the fit of the regression line in the second plot.

To identify influential points in the second dataset, we can can calculate Cook’s Distance for each observation in the dataset and then plot these distances to see which observations are larger than the traditional threshold of 4/n: 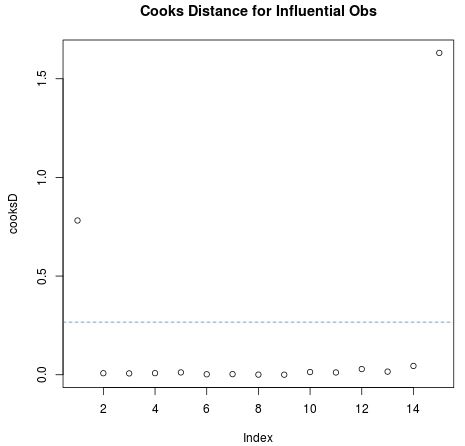 We can clearly see that the first and last observation in the dataset exceed the 4/n threshold. Thus, we would identify these two observations as influential data points that have a negative impact on the regression model.

If we would like to remove any observations that exceed the 4/n threshold, we can do so using the following code: 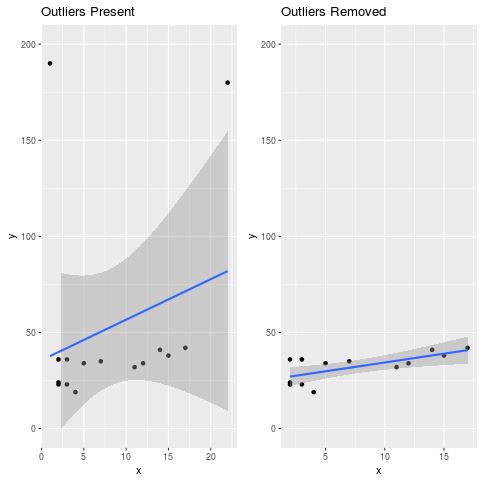 We can clearly see how much better the regression line fits the data with the two influential data points removed.