Hierarchical regression is a technique we can use to compare several different linear models.

We then repeat the process of fitting additional regression models with more explanatory variables and seeing if the newer models offer any improvement over the previous models.

This tutorial provides an example of how to perform hierarchical regression in Stata.

We’ll use a built-in dataset called auto to illustrate how to perform hierarchical regression in Stata. First, load the dataset by typing the following into the Command box:

We can get a quick summary of the data by using the following command: 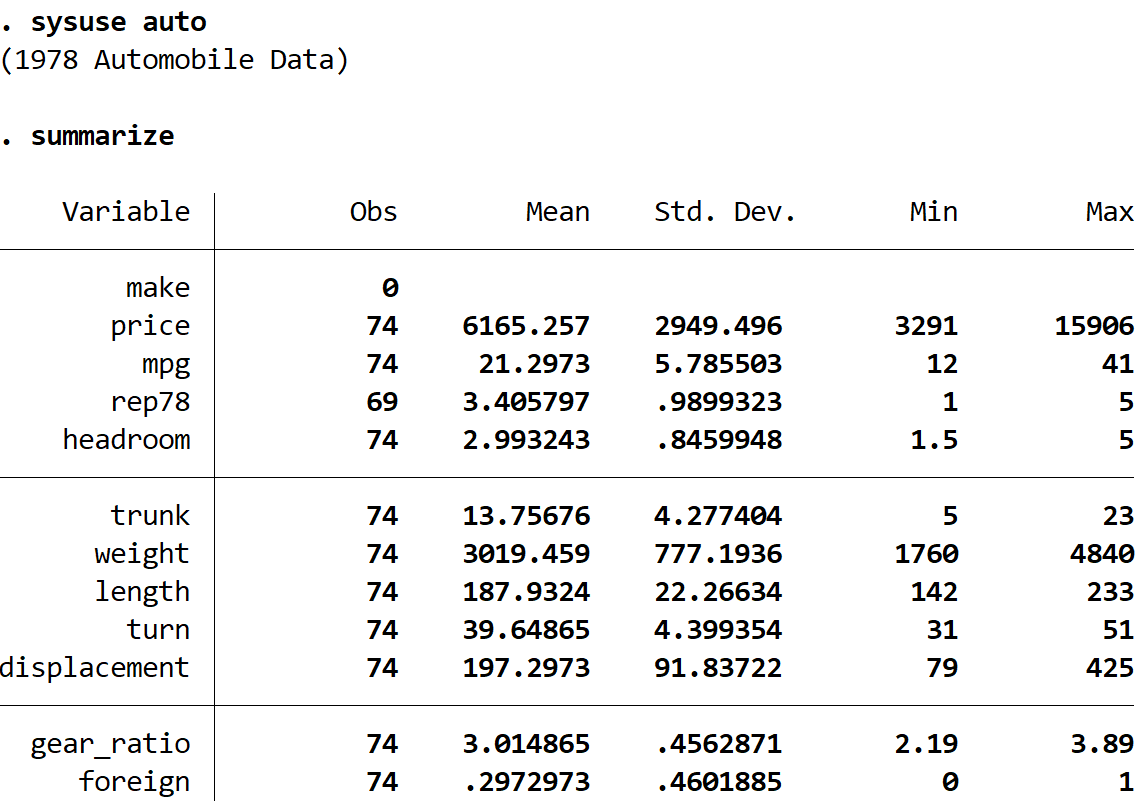 We can see that the dataset contains information about 12 different variables for 74 total cars.

We will fit the following three linear regression models and use hierarchical regression to see if each subsequent model provides a significant improvement to the previous model or not:

In order to perform hierarchical regression in Stata, we will first need to install the hireg package. To do so, type the following into the Command box:

In the window that pops up, click hireg from http://fmwww.bc.edu/RePEc/bocode/h 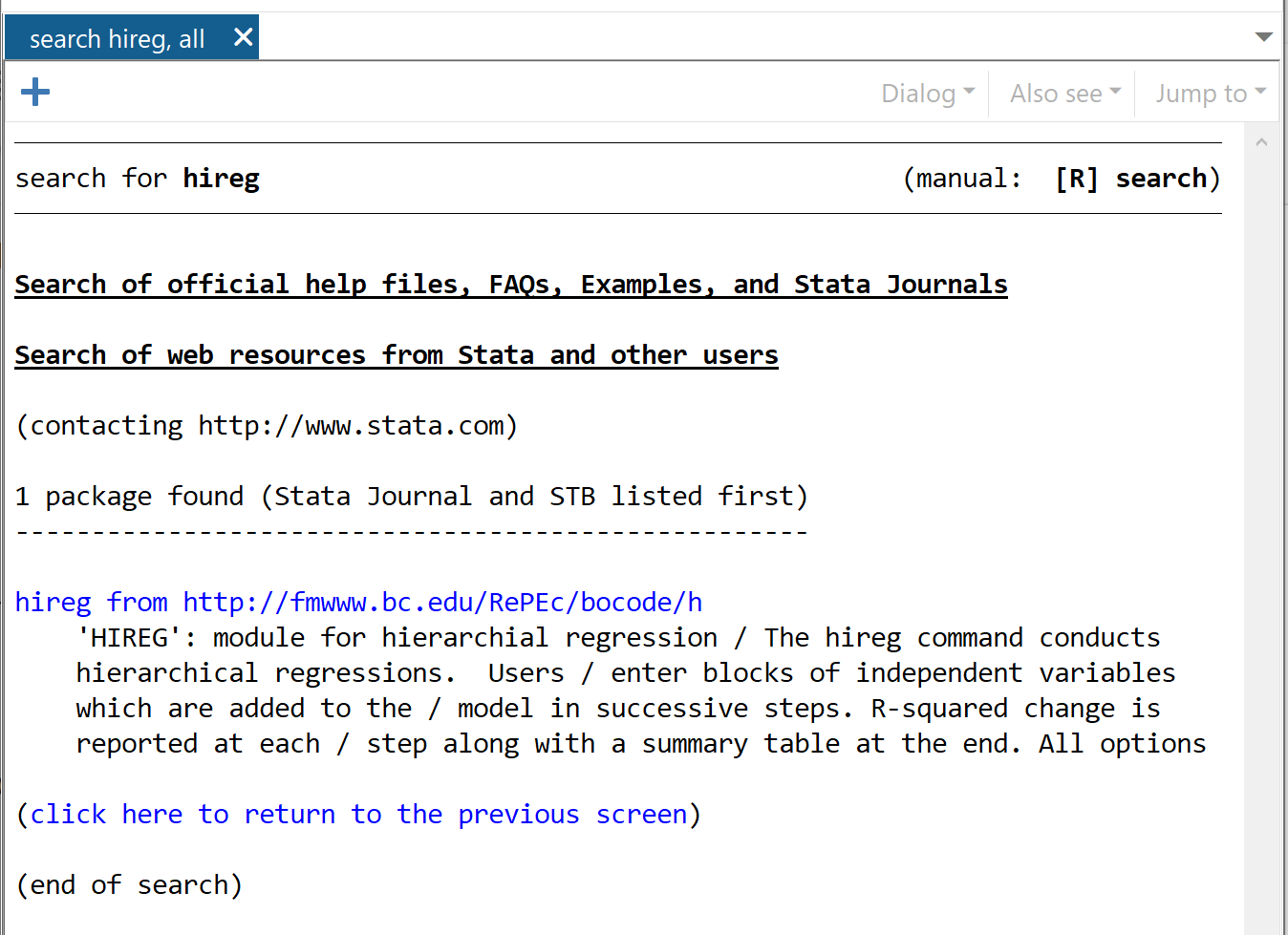 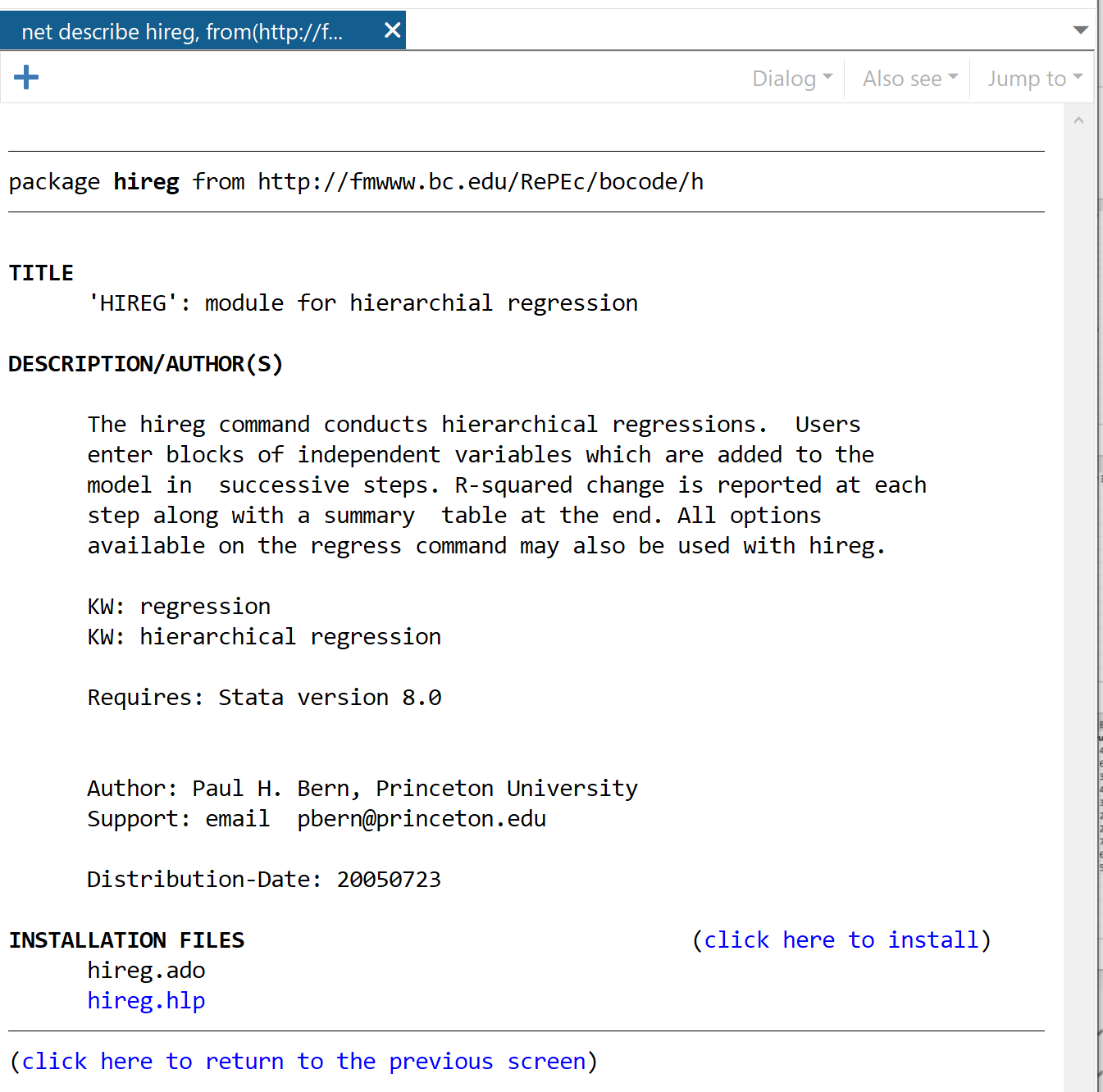 The package will install in a matter of seconds. Next, to perform hierarchical regression we will use the following command:

Here is what this tells Stata to do:

Here is the output of the first model: 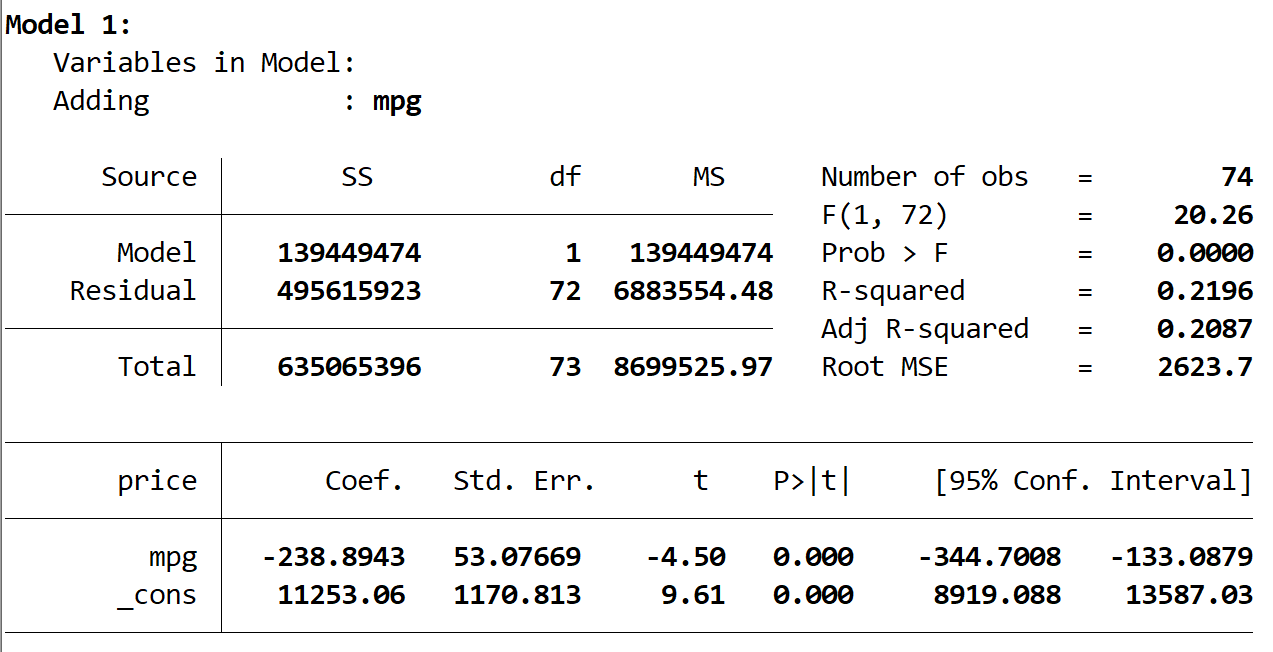 Next, we see the output of the second model: 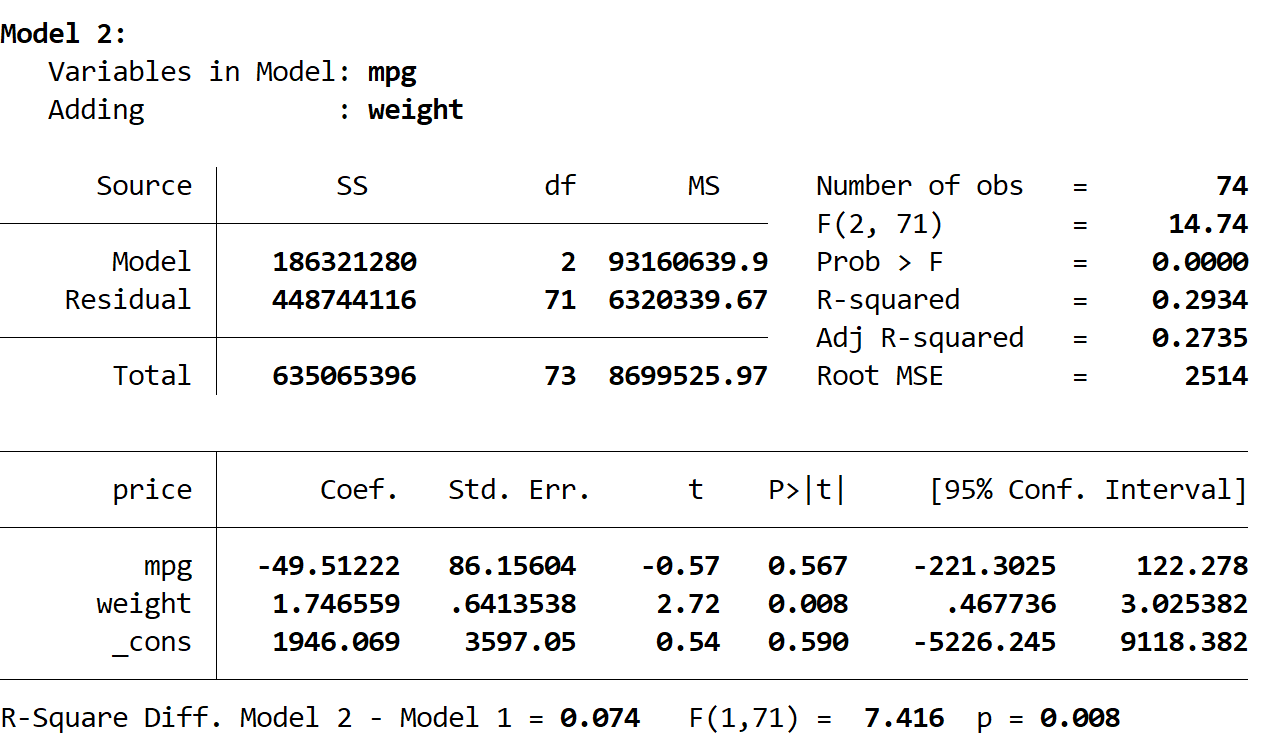 The R-squared of this model is 0.2934, which is larger than the first model. To determine if this difference is statistically significant, Stata performed an F-test which resulted in the following numbers at the bottom of the output:

Because the p-value is less than 0.05, we conclude that there is a statistically significant improvement in the second model compared to the first model.

Lastly, we can see the output of the third model: 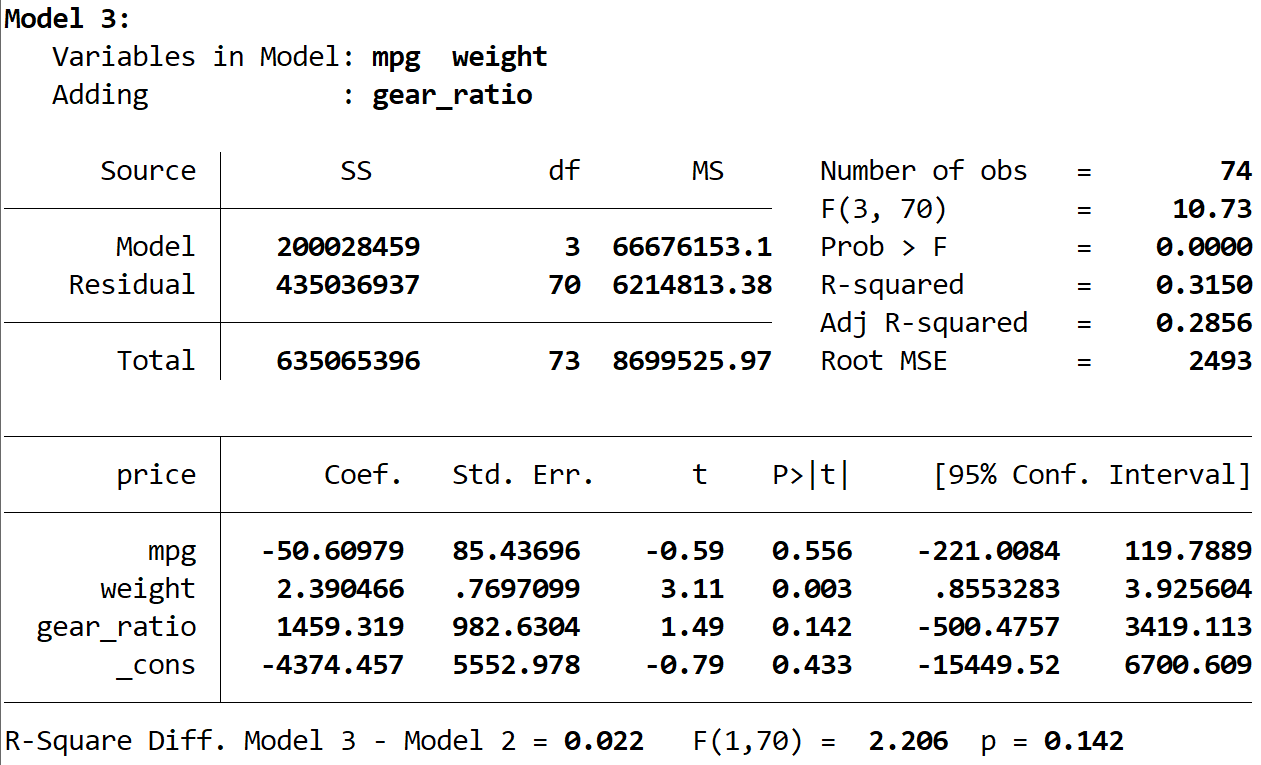 The R-squared of this model is 0.3150, which is larger than the second model. To determine if this difference is statistically significant, Stata performed an F-test which resulted in the following numbers at the bottom of the output:

Because the p-value is not less than 0.05, we don’t have sufficient evidence to say that the third model offers any improvement over the second model.

At the very end of the output we can see that Stata provides a summary of the results: