The Friedman Test is a non-parametric alternative to the Repeated Measures ANOVA.

It is used to determine whether or not there is a statistically significant difference between the means of three or more groups in which the same subjects show up in each group.

When to Use the Friedman Test

The Friedman Test is commonly used in two situations:

1. Measuring the mean scores of subjects during three or more time points.

For example, you might want to measure the resting heart rate of subjects one month before they start a training program, one month after starting the program, and two months after using the program. You can perform the Friedman Test to see if there is a significant difference in the mean resting heart rate of patients across these three time points.

2. Measuring the mean scores of subjects under three different conditions.

For example, you might have subjects watch three different movies and rate each one based on how much they enjoyed it. Since each subject shows up in each sample, you can perform a Friedman Test to see if there is a significant difference in the mean rating of the three movies. 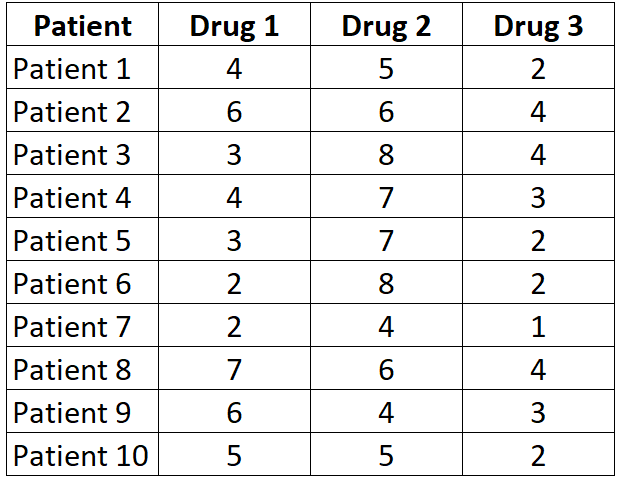 Since each patient is measured on each of the three drugs, we will use the Friedman Test to determine if the mean reaction time differs between the three drugs.

The null hypothesis (H0): µ1 = µ2 = µ3 (the mean reaction times across the populations are all equal)

The alternative hypothesis: (Ha): at least one population mean is different from the rest

We will use the Friedman Test Calculator using the following input:

Once we click “Calculate” then the following output will automatically appear:

The test statistic is Q = 12.35 and the corresponding p-value is p = 0.00208. Since this value is less than 0.05, we can reject the null hypothesis that the mean response time is the same for all three drugs.

We have sufficient evidence to conclude that the type of drug used leads to statistically significant differences in response time.

A Friedman Test was conducted on 10 patients to examine the effect that three different drugs had on response time. Each patient used each drug once.