In research, a floor effect (sometimes called a “basement effect”) occurs when there is some lower limit on a survey or questionnaire and a large percentage of respondents score near this lower limit. The opposite of this is known as a ceiling effect.

A floor effect can cause a variety of problems including: 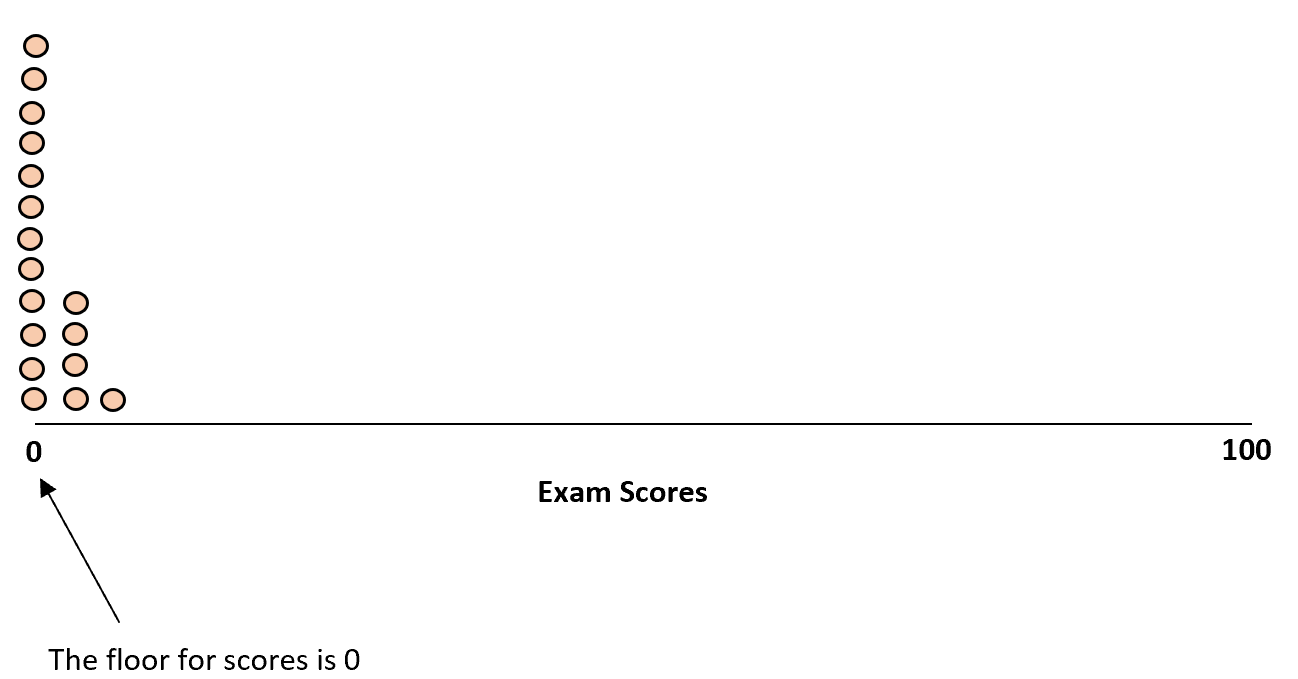 This tutorial provides several examples of floor effects, details on why they’re problematic, and ways to prevent them from occurring.

The following examples illustrate scenarios where floor effects may occur in research.

Example 1: A Questionnaire on Income.

Suppose researchers want to understand the distribution of household incomes in a particular neighborhood so they create a questionnaire to give to each household. Since they want to prevent nonresponse bias, they decide to ask households “which income bracket they fall in” and make the lowest bracket $30k or less.

Suppose a 1st grade teacher administers an IQ exam to her students that is actually designed for adults. More than likely, each student will score at or near the lowest possible score simply because the exam is far too difficult for them.

Because of this, it will be difficult for the teacher to rank the scores of the students in any type of order and she won’t be able to get an accurate idea of how spread out the IQ scores truly are for the students.

Floor effects cause a variety of problems including:

1. It makes it difficult to get an accurate measure of central tendency.

If a large percentage of respondents score at or near the lowest possible value in an exam, questionnaire, or survey, it will become difficult to get an accurate measure of what the “average” score should be.

2. It makes it difficult to get an accurate measure of dispersion.

Similarly, if many respondents score near the lowest possible value on an exam or survey, it will make it seem as if there is less dispersion than there really is.

3. It makes it difficult to rank individuals according to score.

If many individuals receive the lowest possible score on an exam, it becomes impossible to rank the individuals in any way since many of them received the same score.

4. It makes it difficult to differentiate between two groups.

Suppose a professor wants to know if two different studying techniques lead to different average exam scores. If the exam is far too difficult then most of the students in each group will score near the lowest possible value, which will make it impossible to compare the average exam scores between each group to determine if the studying technique made any difference.

How to Prevent Floor Effects

There are two common ways to prevent floor effects:

1. In surveys and questionnaires, provide anonymity and don’t set artificial floors on responses.

For example, in a questionnaire about household incomes researchers need to reassure respondents that their answers will be completely anonymous and allow respondents to fill in their actual income instead of selecting from brackets.

This will increase the likelihood that respondents will provide their true income since their answer will be anonymous and it will allow researchers to understand the actual income distribution without extremely low incomes being masked from the responses.

2. Make exams or tests less difficult so respondents can score a wider variety of scores.

For exams and tests, it’s important that researchers increase the difficulty so that a smaller percentage of individuals are able to score at or near a perfect score.

This will allow researchers to gain an accurate understanding of the mean and the dispersion of the data. This also allows researchers to be able to rank the scores of individuals since fewer individuals are likely to receive the same score.