“Statistical significance is the least interesting thing about the results. You should describe the results in terms of measures of magnitude – not just, does a treatment affect people, but how much does it affect them.” -Gene V. Glass

In statistics, we often use p-values to determine if there is a statistically significant difference between two groups.

After running a two-sample t-test for a difference in means, we find that the p-value of the test is 0.001. If we use a 0.05 significance level, then this means there is a statistically significant difference between the mean test scores of the two groups. Thus, studying technique has an impact on test scores.

However, while the p-value tells us that studying technique has an impact on test scores, it doesn’t tell us the size of the impact. To understand this, we need to know the effect size.

What is Effect Size?

An effect size is a way to quantify the difference between two groups.

While a p-value can tell us whether or not there is a statistically significant difference between two groups, an effect size can tell us how large this difference actually is. In practice, effect sizes are much more interesting and useful to know than p-values.

There are three ways to measure effect size, depending on the type of analysis you’re doing:

When you’re interested in studying the mean difference between two groups, the appropriate way to calculate the effect size is through a standardized mean difference. The most popular formula to use is known as Cohen’s d, which is calculated as:

where  x1 and x2 are the sample means of group 1 and group 2, respectively, and s is the standard deviation of the population from which the two groups were taken.

Using this formula, the effect size is easy to interpret:

Thus, if the means of two groups don’t differ by at least 0.2 standard deviations, the difference is trivial, even if the p-value is statistically significant.

When you’re interested in studying the quantitative relationship between two variables, the most popular way to calculate the effect size is through the Pearson Correlation Coefficient. This is a measure of the linear association between two variables X and Y. It has a value between -1 and 1 where:

The formula to calculate the Pearson Correlation Coefficient is quite complex, but it can be found here for those who are interested.

The further away the correlation coefficient is from zero, the stronger the linear relationship between two variables. This can also be seen by creating a simple scatterplot of the values for variables X and Y.

For example, the following scatterplot shows the values of two variables that have a correlation coefficient of r = 0.94.

This value is far from zero, which indicates that there is a strong positive relationship between the two variables. 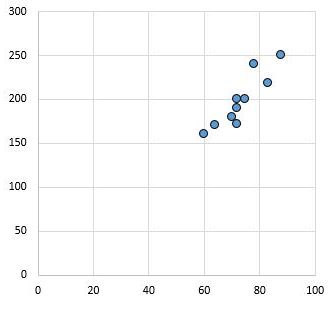 Conversely, the following scatterplot shows the values of two variables that have a correlation coefficient of r = 0.03. This value is close to zero, which indicates that there is virtually no relationship between the two variables. 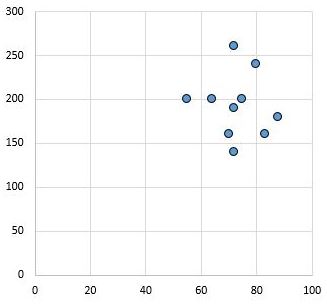 In general, the effect size is considered to be low if the value of the Pearson Correlation Coefficient r is around 0.1, medium if r is around 0.3, and large if r is 0.5 or greater.

For example, suppose we have the following table:

The odds ratio would be calculated as:

The further away the odds ratio is from 1, the higher the likelihood that the treatment has an actual effect.

The Advantages of Using Effect Sizes Over P-Values

2. Unlike p-values, effect sizes can be used to quantitatively compare the results of different studies done in different settings. For this reason, effect sizes are often used in meta-analyses.

3. P-values can be affected by large sample sizes. The larger the sample size, the greater the statistical power of a hypothesis test, which enables it to detect even small effects. This can lead to low p-values, despite small effect sizes that may have no practical significance.

When we perform an independent two-sample t test, it turns out that the test statistic is -0.113 and the corresponding p-value is 0.91. The difference between the mean test scores is not statistically significant.

However, consider if the sample sizes of the two samples were both 200, yet the means and the standard deviations remained the exact same.

In this case, an independent two-sample t test would reveal that the test statistic is -1.97 and the corresponding p-value is just under 0.05. The difference between the mean test scores is statistically significant.

The underlying reason that large sample sizes can lead to statistically significant conclusions is due to the formula used to calculate the test statistics t: