Linear regression is a method we can use to quantify the relationship between one or more predictor variables and a response variable.

Typically we use linear regression with quantitative variables. Sometimes referred to as “numeric” variables, these are variables that represent a measurable quantity. Examples include:

However, sometimes we wish to use categorical variables as predictor variables. These are variables that take on names or labels and can fit into categories. Examples include:

Instead, the solution is to use dummy variables. These are variables that we create specifically for regression analysis that take on one of two values: zero or one.

Dummy Variables: Numeric variables used in regression analysis to represent categorical data that can only take on one of two values: zero or one.

The number of dummy variables we must create is equal to k-1 where k is the number of different values that the categorical variable can take on.

The following examples illustrate how to create dummy variables for different datasets.

Example 1: Create a Dummy Variable with Only Two Values

Suppose we have the following dataset and we would like to use gender and age to predict income: 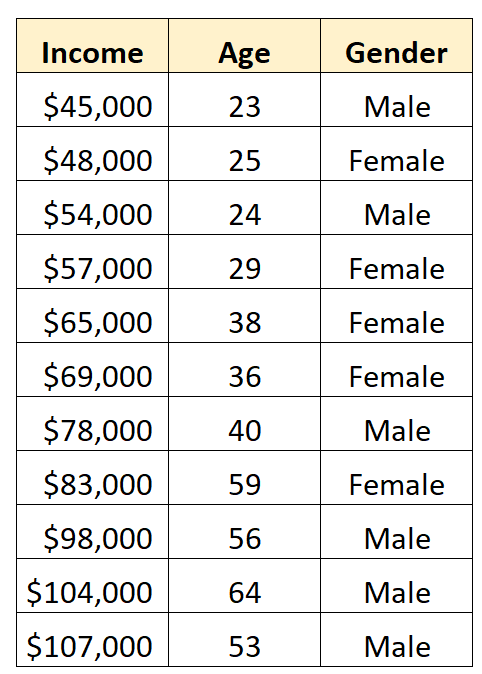 To use gender as a predictor variable in a regression model, we must convert it into a dummy variable.

Since it is currently a categorical variable that can take on two different values (“Male” or “Female”), we only need to create k-1 = 2-1 = 1 dummy variable.

To create this dummy variable, we can choose one of the values (“Male” or “Female”) to represent 0 and the other to represent 1.

In general, we usually represent the most frequently occurring value with a 0, which would be “Male” in this dataset.

Thus, here’s how we would convert gender into a dummy variable: 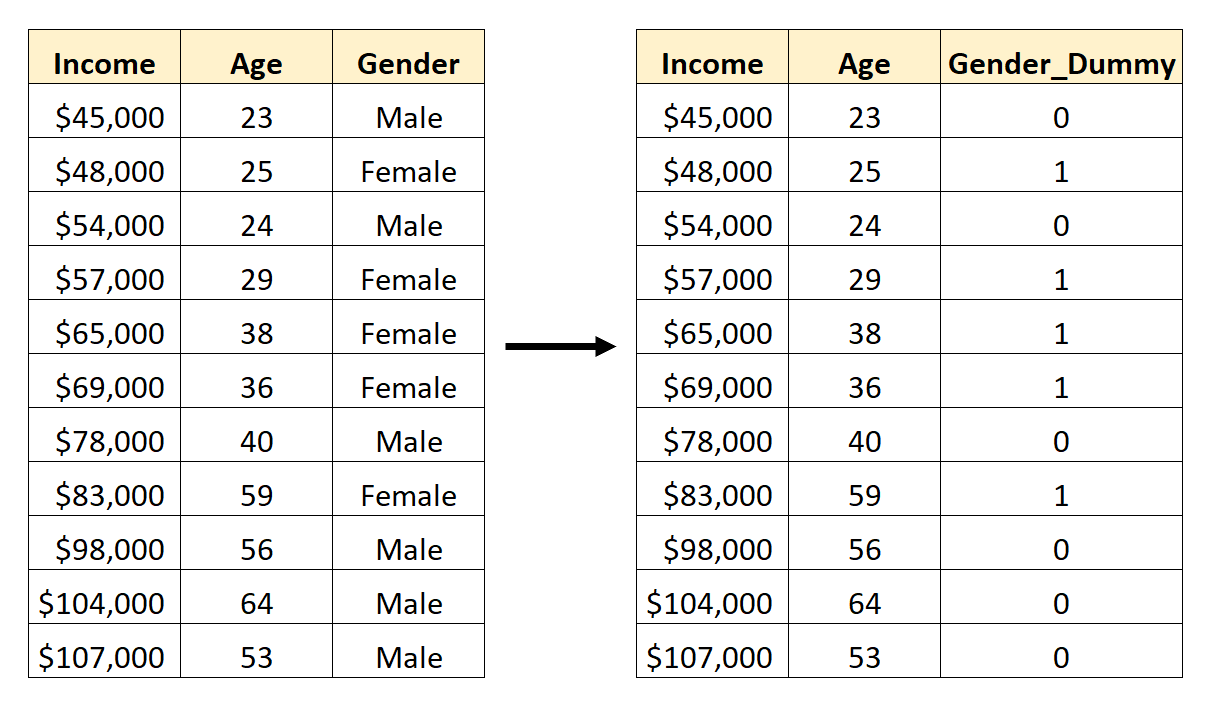 We could then use Age and Gender_Dummy as predictor variables in a regression model.

Suppose we have the following dataset and we would like to use marital status and age to predict income: 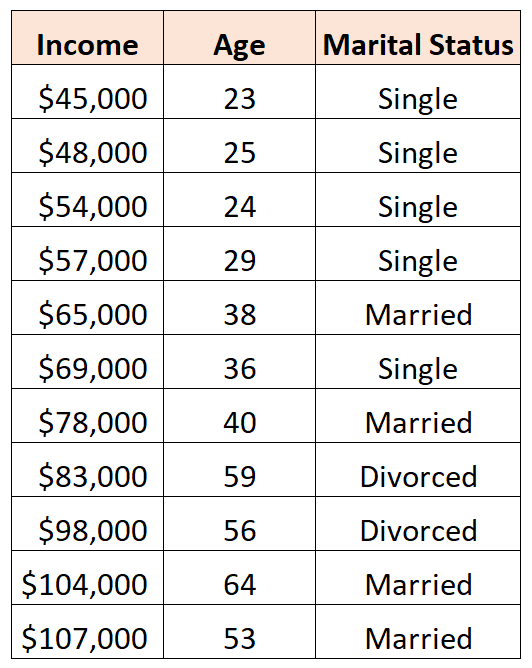 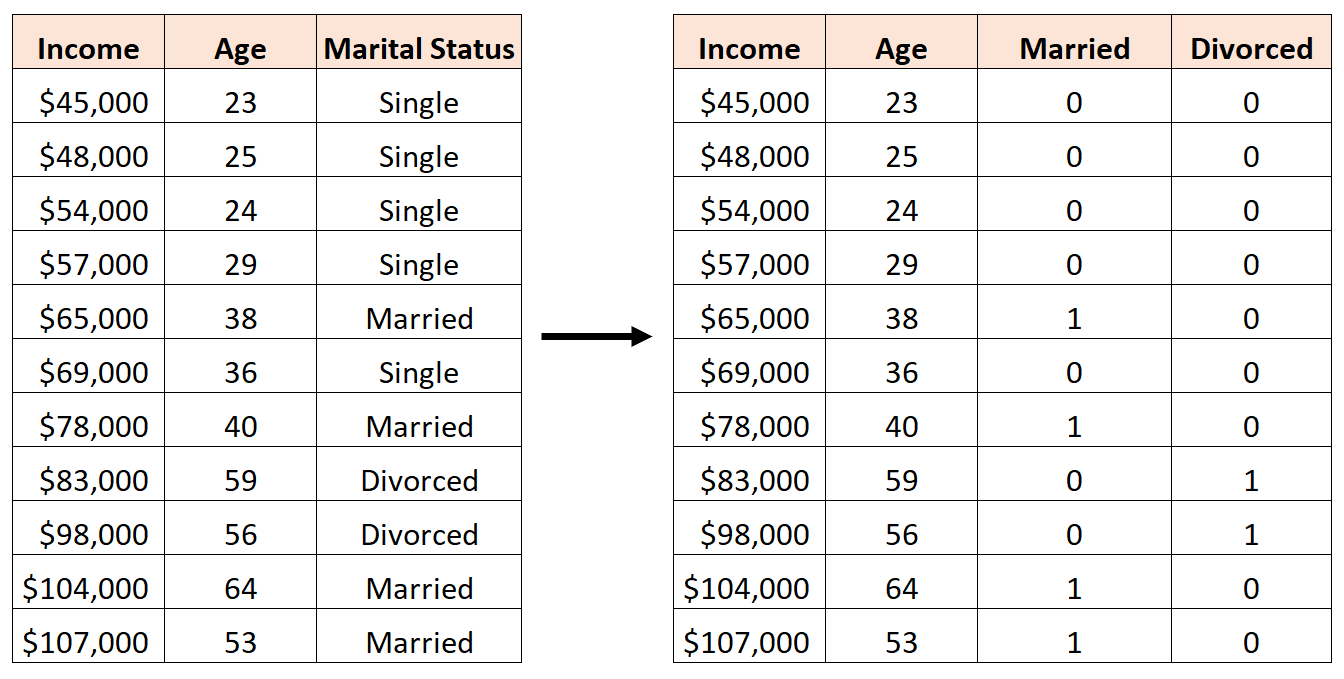 We could then use Age, Married, and Divorced as predictor variables in a regression model.

How to Interpret Regression Output with Dummy Variables

Suppose we fit a multiple linear regression model using the dataset in the previous example with Age, Married, and Divorced as the predictor variables and Income as the response variable.

The fitted regression line is defined as:

We can use this equation to find the estimated income for an individual based on their age and marital status. For example, an individual who is 35 years old and married is estimated to have an income of $68,264:

Here is how to interpret the regression coefficients from the table:

Since both dummy variables were not statistically significant, we could drop marital status as a predictor from the model because it doesn’t appear to add any predictive value for income.

Qualitative vs. Quantitative Variables
The Dummy Variable Trap
How to Read and Interpret a Regression Table
An Explanation of P-Values and Statistical Significance