A decision tree is a type of machine learning model that is used when the relationship between a set of predictor variables and a response variable is non-linear.

The basic idea behind a decision tree is to build a “tree” using a set of predictor variables that predicts the value of some response variable using decision rules.

For example, we might use the predictor variables “years played” and “average home runs” to predict the annual salary of professional baseball players. 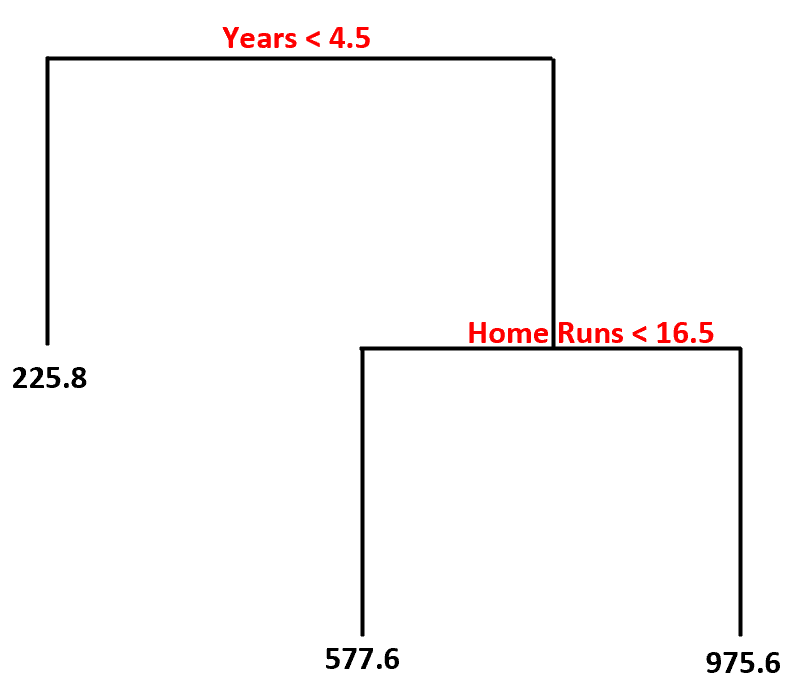 Here’s how we would interpret this decision tree:

The main advantage of a decision tree is that it can be fit to a dataset quickly and the final model can be neatly visualized and interpreted using a “tree” diagram like the one above.

The main disadvantage is that a decision tree is prone to overfitting a training dataset, which means it’s likely to perform poorly on unseen data. It can also be heavily influenced by outliers in the dataset.

An extension of the decision tree is a model known as a random forest, which is essentially a collection of decision trees.

Here are the steps we use to build a random forest model:

2. For each bootstrapped sample, build a decision tree using a random subset of the predictor variables.

The benefit of random forests is that they tend to perform much better than decision trees on unseen data and they’re less prone to outliers.

The downside of random forests is that there’s no way to visualize the final model and they can take a long time to build if you don’t have enough computational power or if the dataset you’re working with is extremely large.

The following table summarizes the pros and cons of decision trees vs. random forests:

Here’s a brief explanation of each row in the table:

Decision trees are easy to interpret because we can create a tree diagram to visualize and understand the final model.

Conversely, we can’t visualize a random forest and it can often be difficulty to understand how the final random forest model makes decisions.

Since decision trees are likely to overfit a training dataset, they tend to perform less than stellar on unseen datasets.

As mentioned earlier, decision trees often overfit training data – this means they’re likely to fit the “noise” in a dataset as opposed to the true underlaying pattern.

Conversely, because random forests only use some predictor variables to build each individual decision tree, the final trees tend to be decorrelated which means random forest models are unlikely to overfit datasets.

Decision trees are highly prone to being affected by outliers.

Conversely, since a random forest model builds many individual decision trees and then takes the average of those trees predictions, it’s much less likely to be affected by outliers.

Decision trees can be fit to datasets quickly.

Conversely, random forests are much more computationally intensive and can take a long time to build depending on the size of the dataset.

When to Use Decision Trees vs. Random Forests

As a rule of thumb:

You should use a decision tree if you want to build a non-linear model quickly and you want to be able to easily interpret how the model is making decisions.

However, you should a random forest if you have plenty of computational ability and you want to build a model that is likely to be highly accurate without worrying about how to interpret the model.

In the real-world, machine learning engineers and data scientists often use random forests because they’re highly accurate and modern-day computers and systems can often handle large datasets that couldn’t previously be handled in the past.

The following tutorials provide an introduction to both decision trees and random forest models:

The following tutorials explain how to fit decision trees and random forests in R: