In statistics, the term variance refers to how spread out values are in a given dataset.

One common question students often have about variance is:

Can variance be negative?

The answer: No, variance cannot be negative. The lowest value it can take on is zero.

To find out why this is the case, we need to understand how variance is actually calculated.

How to Calculate Variance

The formula to find the variance of a sample (denoted as s2) is:

For example, suppose we have the following dataset with 10 values:

We can use the following steps to calculate the variance of this sample:

The mean is simply the average. This turns out to be 14.7.

Next, we can calculate the squared deviation of each individual value from the mean. 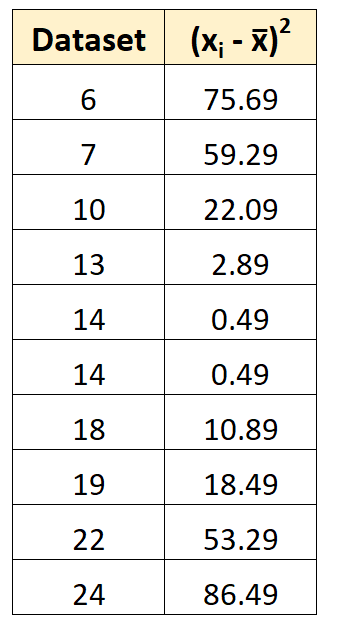 Next, we can take the sum of all the squared deviations:

Lastly, we can calculate the sample variance as the sum of squared deviations divided by (n-1):

An Example of Zero Variance

The only way that a dataset can have a variance of zero is if all of the values in the dataset are the same.

For example, the following dataset has a sample variance of zero:

The mean of the dataset is 15 and none of the individual values deviate from the mean. Thus, the sum of the squared deviations will be zero and the sample variance will simply be zero.

Can Standard Deviation Be Negative?

A more common way to measure the spread of values in a dataset is to use the standard deviation, which is simply the square root of the variance.

For example, if the variance of a given sample is s2 = 36.678, then the standard deviation (written as s) is calculated as: