Methods like bagging and random forests, however, build many different models based on repeated bootstrapped samples of the original dataset. Predictions on new data are made by taking the average of the predictions made by the individual models.

These methods tend to offer an improvement in prediction accuracy over methods that only use a single predictive model because they use the following process:

Another method that tends to offer even further improvement in predictive accuracy is known as boosting.

Boosting is a method that can be used with any type of model, but it is most often used with decision trees.

The idea behind boosting is simple:

2. Next, build another weak model based on the residuals of the previous model.

3. Continue this process until k-fold cross-validation tells us to stop.

By using this method, we can start with a weak model and keep “boosting” the performance of it by sequentially building new trees that improve upon the performance of the previous tree until we end up with a final model that has high predictive accuracy. 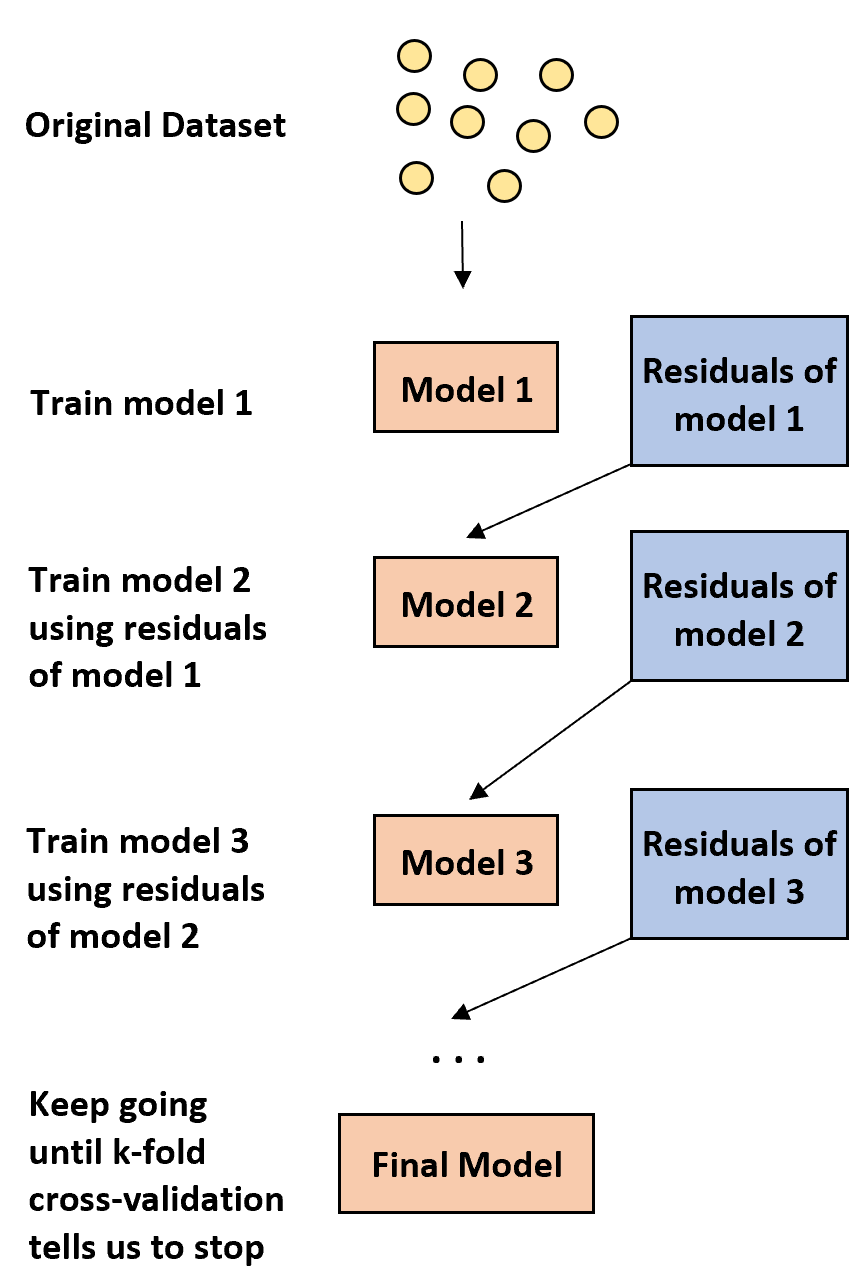 Why Does Boosting Work?

It turns out that boosting is able to produce some of the most powerful models in all of machine learning.

In many industries, boosted models are used as the go-to models in production because they tend to outperform all other models.

The reason boosted models work so well comes down to understanding a simple idea:

1. First, boosted models build a weak decision tree that has low predictive accuracy. This decision tree is said to have low variance and high bias.

2. As boosted models go through the process of sequentially improving previous decision trees, the overall model is able to slowly reduce the bias at each step without increasing the variance by much.

3. The final fitted model tends to have sufficiently low bias and low variance, which leads to a model that is able to produce low test error rates on new data.

The obvious benefit of boosting is that it’s able to produce models that have high predictive accuracy compared to almost all other types of models.

One potential drawback is that a fitted boosted model is very difficult to interpret. While it may offer tremendous ability to predict the response values of new data, it’s difficult to explain the exact process that it uses to do so.

In practice, most data scientists and machine learning practitioners build boosted models because they want to be able to predict the response values of new data accurately. Thus, the fact that boosted models are hard to interpret usually isn’t an issue.

In practice there are actually many types of algorithms that are used for boosting, including:

Depending on the size of your dataset and the processing power of your machine, one of these methods may be preferable to the other.