A Bonferroni Correction refers to the process of adjusting the alpha (α) level for a family of statistical tests so that we control for the probability of committing a type I error.

The formula for a Bonferroni Correction is as follows:

For example, if we perform three statistical tests at once and wish to use α = .05 for each test, the Bonferroni Correction tell us that we should use αnew = .01667.

Thus, we should only reject the null hypothesis of each individual test if the p-value of the test is less than .01667.

This type of correction is often made in post-hoc tests following an ANOVA when we want to compare several group means at once.

The following step-by-step example shows how to perform a Bonferroni Correction following a one-way ANOVA in Excel.

First, let’s create a fake dataset that shows the exam scores of students who used one of three different studying techniques to prepare for the exam: 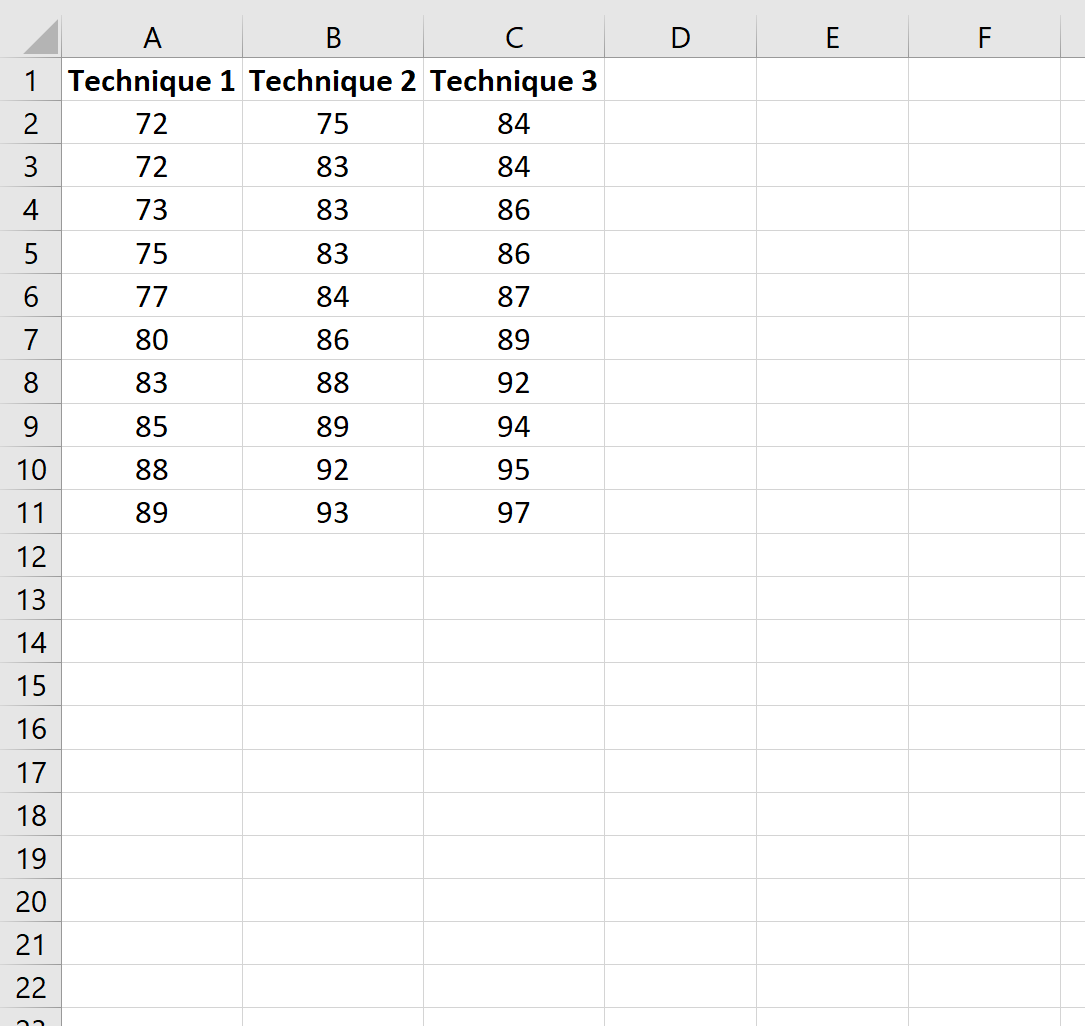 Next, let’s perform a one-way ANOVA to determine if the mean exam scores are equal across all three groups.

First, highlight all of the data including the column headers: 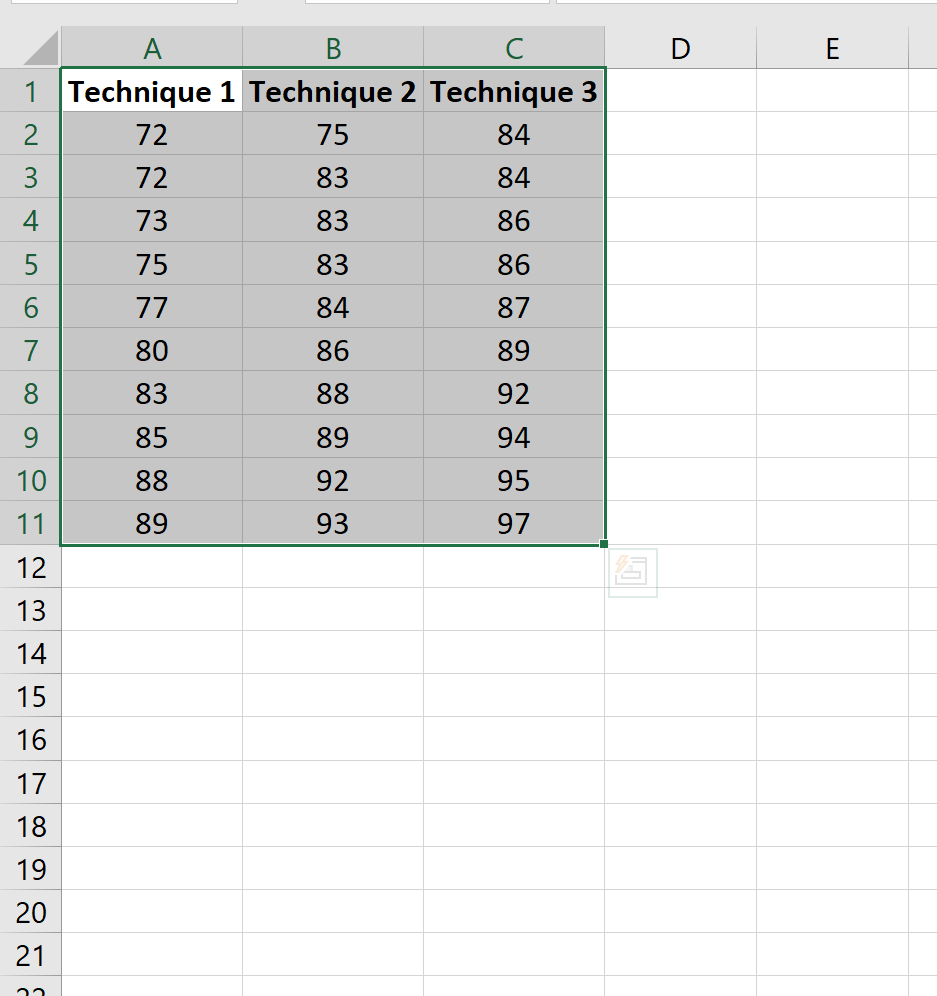 If you don’t see this option available, you need to first load the Analysis ToolPak. 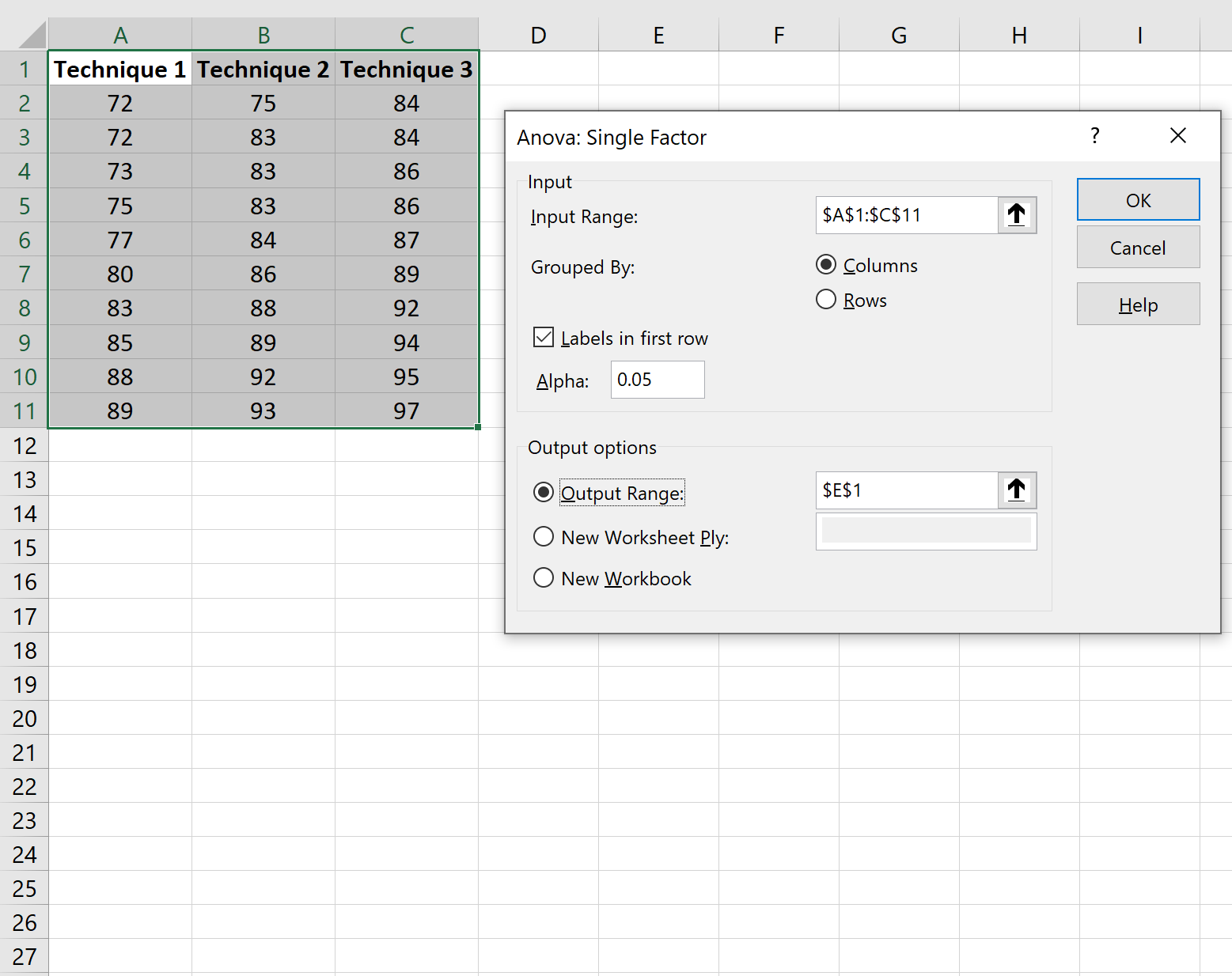 The results of the one-way ANOVA will automatically appear: 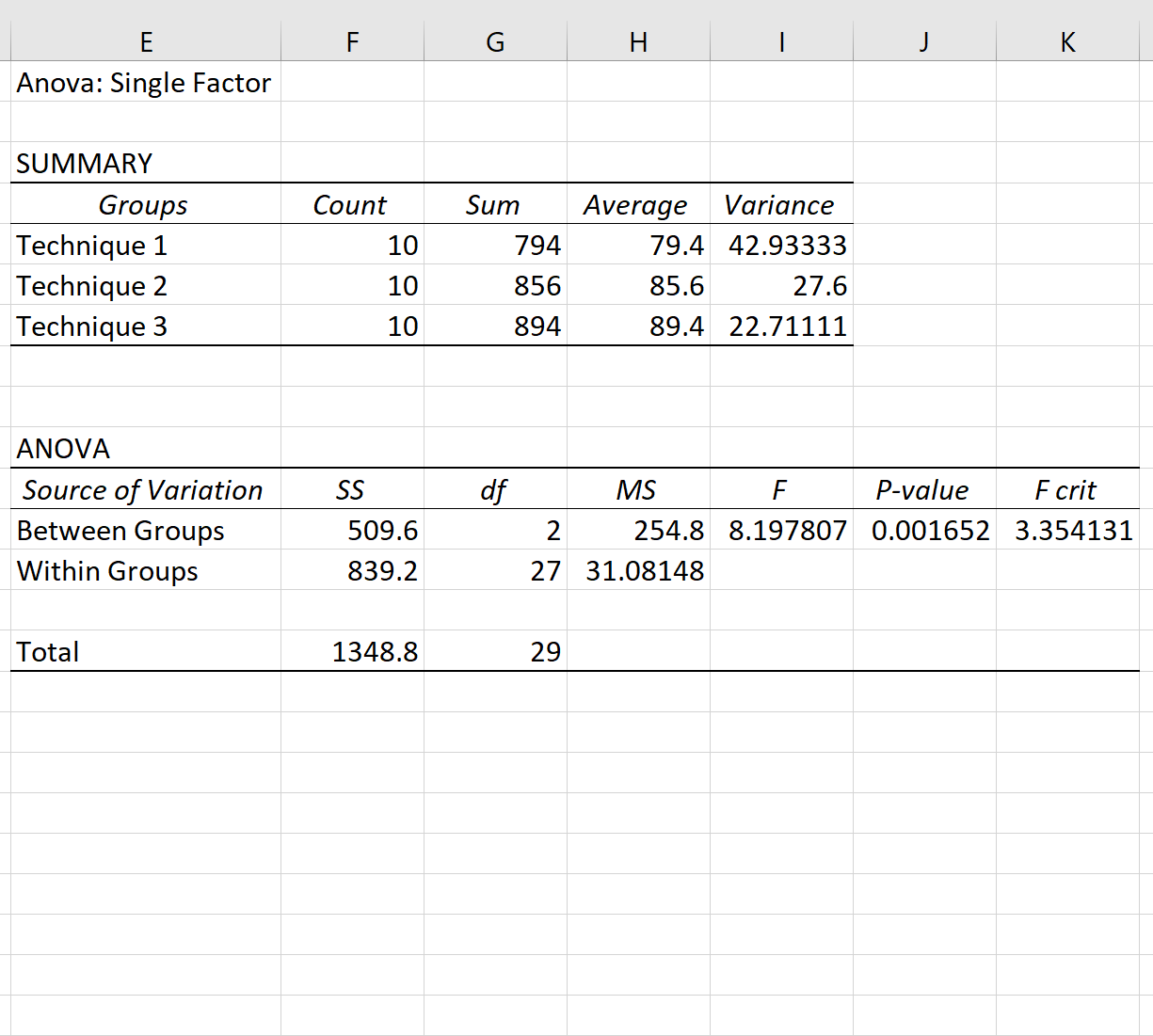 Recall that a one-way ANOVA has the following null and alternative hypotheses:

Since the p-value in the ANOVA table (0.001652) is less than .05, we have sufficient evidence to reject the null hypothesis. In other words, the mean exam scores between the three groups are not equal.

Next, we can perform multiple comparisons using a Bonferroni correction between the three groups to see exactly which group means are different.

Using a Bonferroni correction, we can calculate the adjusted alpha level as follows:

In our example, we’ll be performing the following three comparisons: 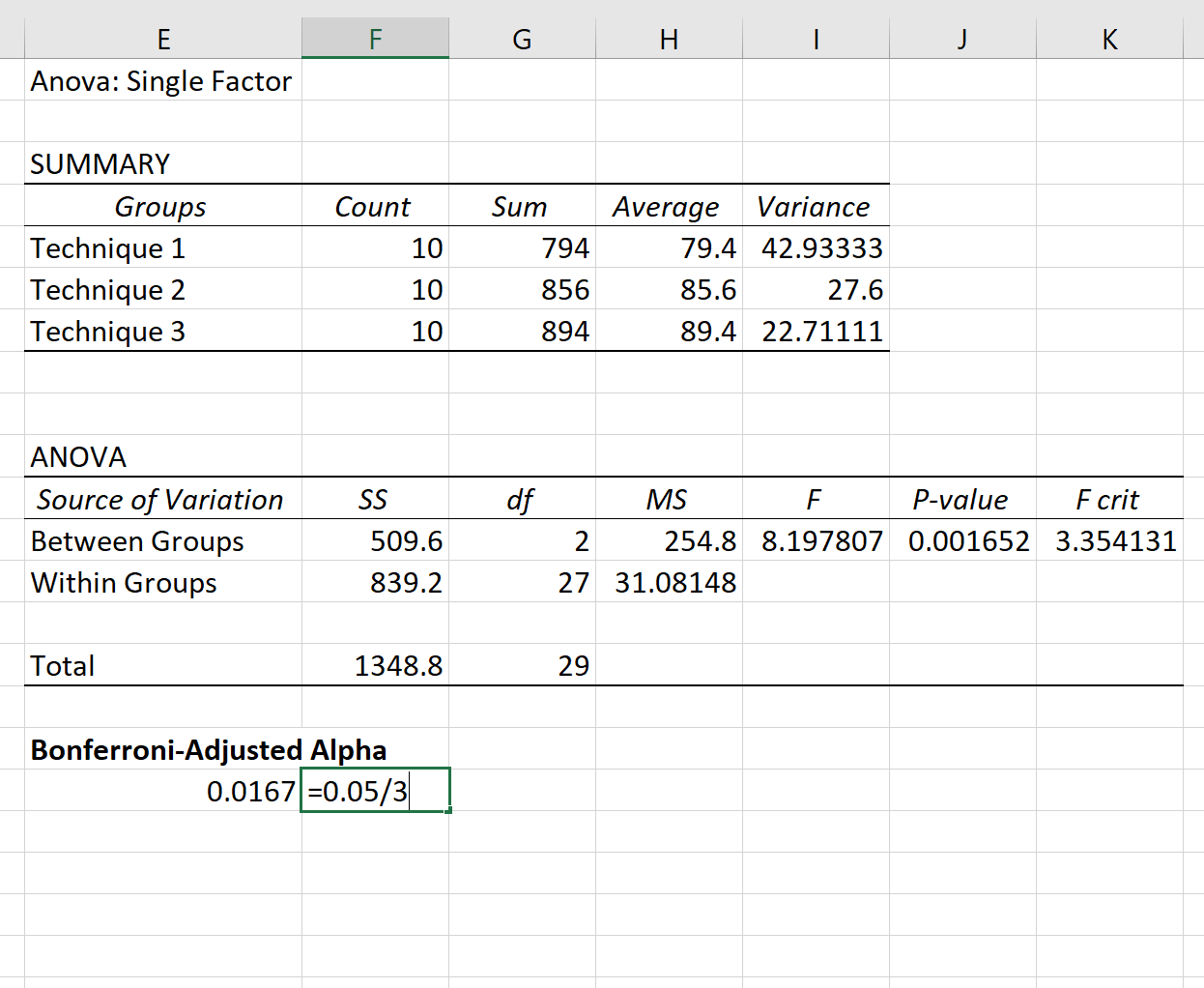 Next, we’ll use a t-test to compare the means between each group. In Excel, we can use the following syntax:

The following screenshot shows how to perform each t-test: 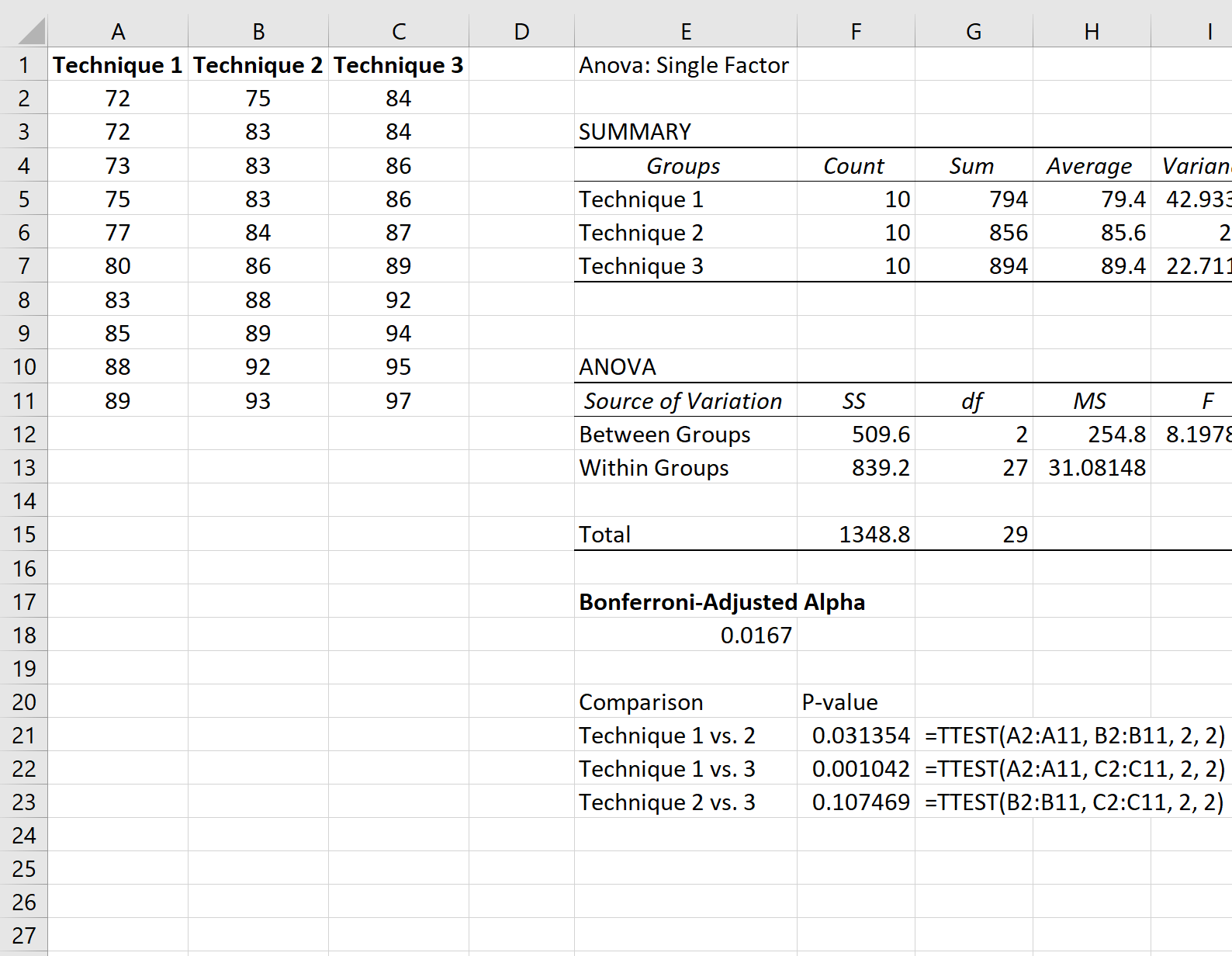 The only p-value that is less than the Bonferroni-adjusted alpha level is from the comparison between technique 1 vs. technique 2, which had a p-value of 0.001042.

Thus, we would conclude that only statistically significant difference in mean exam scores was between technique 1 and technique 2.