When we create a decision tree for a given dataset, we only use one training dataset to build the model.

However, the downside of using a single decision tree is that it tends to suffer from high variance. That is, if we split the dataset into two halves and apply the decision tree to both halves, the results could be quite different.

One method that we can use to reduce the variance of a single decision tree is known as bagging, sometimes referred to as bootstrap aggregating.

1. Take b bootstrapped samples from the original dataset.

2. Build a decision tree for each bootstrapped sample.

Through building hundreds or even thousands of individual decision trees and taking the average predictions from all of the trees, we often end up with a fitted bagged model that produces a much lower test error rate compared to a single decision tree.

This tutorial provides a step-by-step example of how to create a bagged model in R.

First, we’ll load the necessary packages for this example:

For this example, we’ll use a built-in R dataset called airquality which contains air quality measurements in New York on 153 individual days.

The following code shows how to fit a bagged model in R using the bagging() function from the ipred library.

Note that we chose to use 150 bootstrapped samples to build the bagged model and we specified coob to be TRUE to obtain the estimated out-of-bag error.

We also used the following specifications in the rpart.control() function:

Essentially these two arguments allow the individual trees to grow extremely deep, which leads to trees with high variance but low bias. Then when we apply bagging we’re able to reduce the variance of the final model while keeping the bias low.

From the output of the model we can see that the out-of-bag estimated RMSE is 17.4973. This is the average difference between the predicted value for Ozone and the actual observed value.

Step 3: Visualize the Importance of the Predictors

We can, however, visualize the importance of the predictor variables by calculating the total reduction in RSS (residual sum of squares) due to the split over a given predictor, averaged over all of the trees. The larger the value, the more important the predictor.

The following code shows how to create a variable importance plot for the fitted bagged model, using the varImp() function from the caret library: 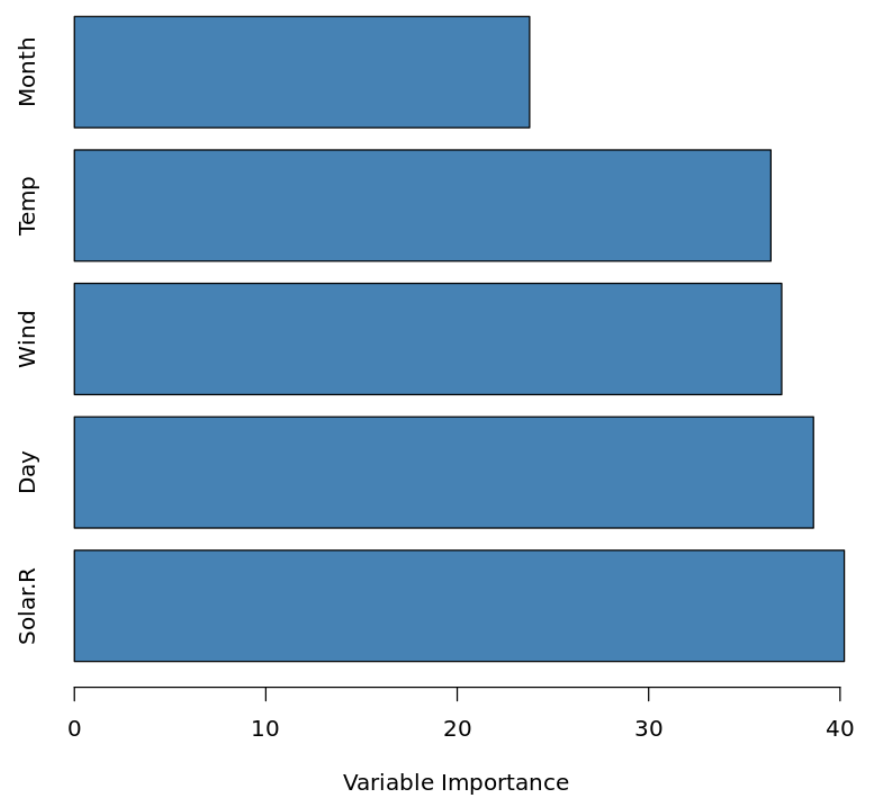 We can see that Solar.R is the most importance predictor variable in the model while Month is the least important.

Step 4: Use the Model to Make Predictions

Lastly, we can use the fitted bagged model to make predictions on new observations.

Based on the values of the predictor variables, the fitted bagged model predicts that the Ozone value will be 24.487 on this particular day.

The complete R code used in this example can be found here.