A one-way ANOVA is a statistical test used to determine whether or not there is a significant difference between the means of three or more independent groups.

Here’s an example of when we might use a one-way ANOVA:

You randomly split up a class of 90 students into three groups of 30. Each group uses a different studying technique for one month to prepare for an exam. At the end of the month, all of the students take the same exam.

You want to know whether or not the studying technique has an impact on exam scores so you conduct a one-way ANOVA to determine if there is a statistically significant difference between the mean scores of the three groups.

Before we can conduct a one-way ANOVA, we must first check to make sure that three assumptions are met.

1. Normality – Each sample was drawn from a normally distributed population.

2. Equal Variances – The variances of the populations that the samples come from are equal.

If these assumptions aren’t met, then the results of our one-way ANOVA could be unreliable.

ANOVA assumes that each sample was drawn from a normally distributed population.

How to check this assumption in R:

To check this assumption, we can use two approaches:

For example, suppose we recruit 90 people to participate in a weight-loss experiment in which we randomly assign 30 people to follow either program A, program B, or program C for one month. To see if the program has an impact on weight loss, we want to conduct a one-way ANOVA. The following code illustrates how to check the normality assumption using histograms, Q-Q plots, and a Shapiro-Wilk test. 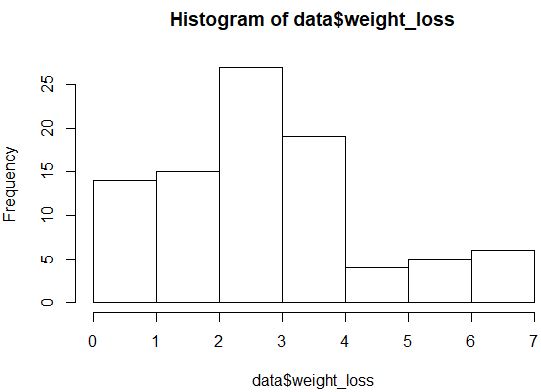 The distribution doesn’t look very normally distributed (e.g. it doesn’t have a “bell” shape), but we can also create a Q-Q plot to get another look at the distribution. 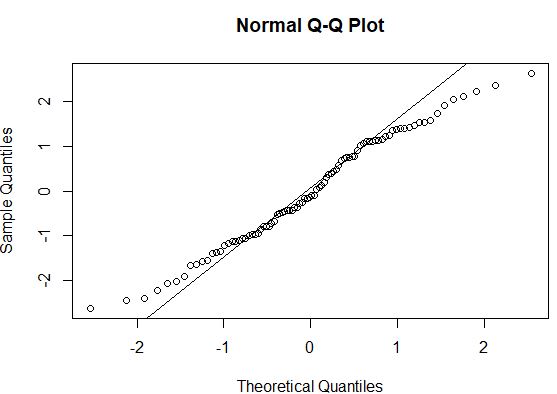 In general, if the data points fall along a straight diagonal line in a Q-Q plot, then the dataset likely follows a normal distribution. In this case, we can see that there is some noticeable departure from the line along the tail ends which might indicate that the data is not normally distributed.

In general, a one-way ANOVA is considered to be fairly robust against violations of the normality assumption as long as the sample sizes are sufficiently large.

Also, if you have extremely large sample sizes then statistical tests like the Shapiro-Wilk test will almost always tell you that your data is non-normal. For this reason, it’s often best to inspect your data visually using graphs like histograms and Q-Q plots. By simply looking at the graphs, you can get a pretty good idea of whether or not the data is normally distributed.

If the normality assumption is severely violated or if you just want to be extra conservative, you have two choices:

(1) Transform the response values of your data so that the distributions are more normally distributed.

(2) Perform an equivalent non-parametric test such as a Kruskal-Wallis Test that doesn’t require the assumption of normality.

ANOVA assumes that the variances of the populations that the samples come from are equal.

How to check this assumption in R:

We can check this assumption in R using two approaches:

The following code illustrates how to do so, using the same fake weight-loss dataset we created earlier. 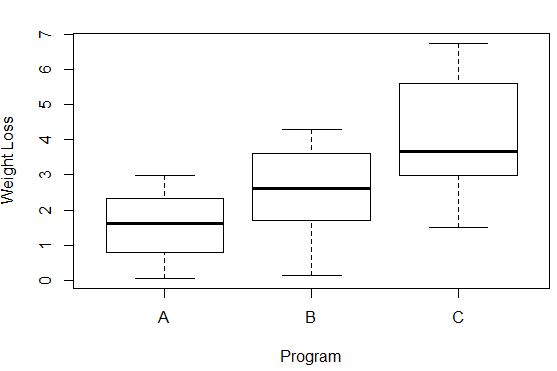 The variance of weight loss in each group can be seen by the length of each box plot. The longer the box, the higher the variance. For example, we can see that the variance is a bit higher for participants in program C compared to both program A and program B.

In general, a one-way ANOVA is considered to be fairly robust against violations of the equal variances assumption as long as each group has the same sample size.

However, if the sample sizes are not the same and this assumption is severely violated, you could instead run a Kruskal-Wallis Test, which is the non-parametric version of the one-way ANOVA.

How to check this assumption:

There is no formal test you can use to verify that the observations in each group are independent and that they were obtained by a random sample. The only way this assumption can be satisfied is if a randomized design was used.

If this assumption is violated, the best thing to do is to set up the experiment again in a way that uses a randomized design.